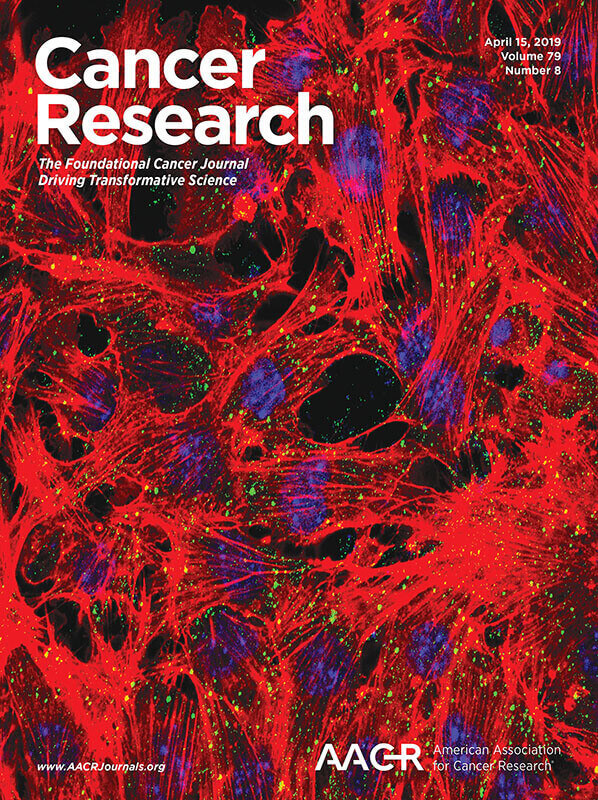 A new approach to breast cancer may prevent cancer from reappearing years later. A research team led by scientists at Purdue University have identified a drug the doesn't kill the metastatic cancer cells, but instead keeps them in a non-threatening early developmental state in a technique the researchers call "lock-'n'-block." The research appears on the cover of this month's edition of the scientific journal Cancer research. (Purdue University courtesy Cancer Research) Download image

WEST LAFAYETTE, Ind. — "They got all of it" are the reassuring words people hope to hear following cancer surgery, but a growing understanding of the science of how cancer spreads, and metastasizes, is suggesting that not only is this almost never true but — and here is the surprising part — it might be better to try to contain the cancer than to eliminate it.

The new approach, which at this point has been tested only in animal models, is called "lock-'n' -block," and a national team of scientists led by researchers at Purdue University has found that a drug already on the market for another use is showing strong promise as a therapy to keep breast cancer from metastasizing.

Michael Wendt, assistant professor of medicinal chemistry and molecular pharmacology, says that cancer researchers are beginning to realize they have been chasing an impossible goal.

"Most cancer therapy is targeted with the idea that we want to kill all of the cancer cells. Rid the body of cancer. But recently, there are lots of studies that suggest that we're never going to be able to do that. Cancer cells evolve so fast that they will always find a way to overcome any type of therapy," Wendt said. "An emerging concept in cancer treatment is that maybe we shouldn't try to kill all of the cancer cells, but try to keep them in a low state that doesn't generate any kind of symptoms. A sort of dormancy, if you will."

Wendt has led a multi-institutional study that has identified a drug —fostamatinib, which is sold under the trade name Tavalisse — that was shown to be effective in mice in blocking and containing metastatic cancer cells. The research was recently published in the journal Cancer Research.

Aparna Shinde, a researcher at AbbVie Inc., and formerly a graduate student in the Purdue's Department of Medicinal Chemistry and Molecular Pharmacology, said the research focused on breast cancer because it is especially known to lead to metatisizing cancers years later.

"After you have breast cancer you always get this dissemination of cancer cells," she said. "Breast cancer is no longer considered a curable disease — it is now considered a chronic disease, because 10 or 20 years later, you can get secondary tumors because of the metastasizing cells.

"But now we have shown that we can block these cells in a dormant state so that even if a patient has these metastizing cells we can hold them in this state for a very long time."

Wendt explains that when cancer cells move from a primary tumor and go to another part of the body, they can go through some form of years-long dormancy or latency. These cancer cells are very resistant to current drug therapies, because current drugs are designed to target cells that grow faster than normal cells, as tumor cells do. That is not true of these disseminated cancer cells, which can lie dormant for many, many years.

"So that's the goal we are exploring now. Instead of trying to eliminate those disseminated cells, how do we keep them in that dormant state?" Wendt said.

The researchers used the drug fostamatinib because it inhibits a particular protein, spleen tyrosine kinase (SYK), that is found in these disseminated cancer cells.

"This is great for us because this is a drug with low toxicity. It's designed for people with chronic disease so that they can take for a long time," Wendt said. "So, we think fostamatinib is a perfect candidate for this kind of years-long 'lock-'n'-block' type of approach. We think this is a good candidate to move forward for a trial to see if we can stabilize dormancy. If SYK is expressed in other cancers this could apply to those as well."

In their current study, the researchers removed breast cancer tumors from the mice surgically. The tumor cells were labeled with luciferase, the bioluminescent firefly protein, which allows the researchers to track and quantify the level of metatisizing cells.

The researchers found that the cancer cells treated with fostamatinib remained in a dormant state and did not cause metastases in other areas of the body.

"Our work is unique because there hasn't been much research that tests treatments in a post-surgical metastatic setting. Most research is focused on treating the primary tumor. We are looking to target the later processes of disease — to see if we can hold tumor cells in their dormant state," Wendt said. "But you can imagine that clinical trials for this kind of thing is going to be very difficult because technically the patients are in remission and disease-free. We suspect that these patients have these dormant cancer cells disseminating through their bodies, but we don't have a way to detect those right now."

This work was supported by funding from American Cancer Society and the National Cancer Institute.

This research also aligns with Purdue's Giant Leaps celebration, acknowledging the university’s global advancements made in AI and health as part of Purdue’s 150th anniversary. This is one of the four themes of the yearlong celebration’s Ideas Festival, designed to showcase Purdue as an intellectual center solving real-world issues.

The ability of breast cancer cells to transiently transition between epithelial and mesenchymal states contributes to their metastatic potential. Therefore, as opposed to complete tumor cell eradication, driving tumor cells into a stable mesenchymal state presents a unique opportunity to pharmacologically limit disease progression by promoting an asymptomatic state of dormancy. Herein, we compare a reversible model of epithelial-mesenchymal transition (EMT) induced by TGF-b to a stable mesenchymal phenotype induced by chronic exposure to the ErbB kinase inhibitor, lapatinib. Only cells capable of returning to an epithelial phenotype resulted in skeletal metastasis. Gene expression analyses of the two mesenchymal states indicated similar transition intensities. A potently downregulated gene in both datasets was that of spleen tyrosine kinase (SYK). In contrast to this similar diminution in mRNA, kinome analyses using a peptide array and DNA-conjugated peptide substrates indicated a robust increase in SYK activity specifically upon TGF-b-induced EMT. Mechanistically, we demonstrate that SYK is present in cytoplasmic RNA processing depots known as P-bodies that form during the onset of EMT. SYK activity is required for autophagy-mediated clearance of P-bodies during mesenchymal-epithelial transition (MET). Importantly, genetic knockout of autophagy related 7 (ATG7) or pharmacological inhibition of SYK activity prevents P-body clearance and MET, inhibiting metastatic tumor outgrowth. Overall, the current study strongly suggests assessment of SYK activity as a biomarker for metastatic disease, and the use of fostamatinib, a clinically approved inhibitor of SYK, to stabilize the latency of disseminated tumor cells.