Large-scale forest carbon sequestration could cause food prices to skyrocket 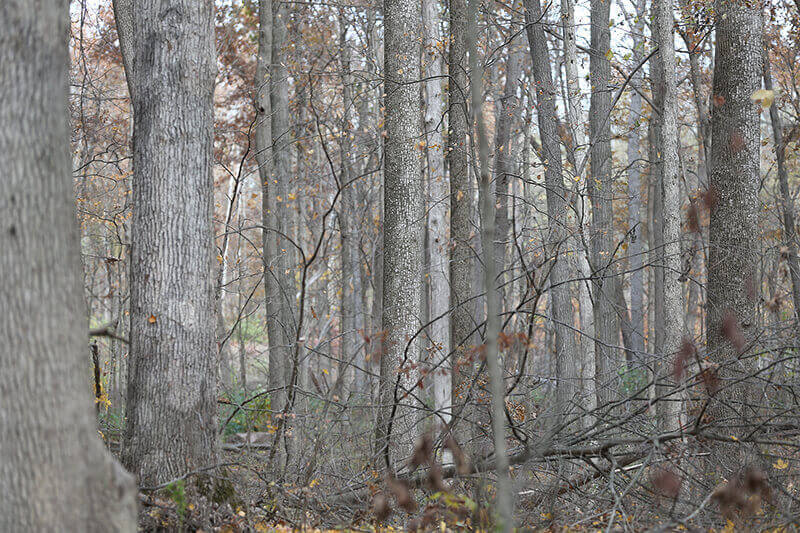 Trapping carbon in forests is an effective way to remove greenhouse gases from the atmosphere, but Purdue University economists show that employing the strategy in a large-scale manner would significantly increase food prices. Download image

WEST LAFAYETTE, Ind. – The Paris Agreement calls for reducing greenhouse gases enough to keep global temperatures from rising more than 1.5 degrees Celsius from preindustrial levels. This could be done by reducing emissions or capturing and storing atmospheric carbon.

One of the cheapest and most efficient ways to capture and store carbon is through increasing forested lands. Forest trees capture atmospheric carbon through photosynthesis and store it in their biomass, including a significant portion in roots and soil. Estimates suggest that forests can store around 80 or more metric tons of carbon per acre.

That solution would come at a price, however, according to a Purdue University study led by Wally Tyner, the James and Lois Ackerman Chair in Purdue’s Department of Agricultural Economics. Meeting half the Paris Agreement’s goal for atmospheric carbon reduction would send food prices soaring, especially in developing economies.

“In some places, food prices would get so high that it would never happen,” said Tyner, whose findings were published in the journal Environmental and Resource Economics. “Significant forest carbon sequestration leads to reductions in food supply at the same time we’re expecting population increases. This is a simple supply and demand problem.”

Tyner, along with the University of Florida lecturer Luis Moisés Peña‑Lévano, and Farzad Taheripour, a research associate professor of agricultural economics at Purdue, came to their conclusion using Purdue’s GTAP-BIO-FCS model, which evaluates the economic and land-use impacts of emissions-reduction targets and policies under different climate scenarios.

Reducing greenhouse emissions by enough to meet the Paris Agreement would cost about $150 per ton without an equivalent subsidy for forest carbon sequestration (FCS). With an FCS subsidy set at the same rate as a carbon tax, the value drops to $80 per ton, mainly because forests are so efficient at sequestering carbon, making it responsible for a 21 percent share in the emission reductions. A farmer payment of $80 per ton amounts to about $342 per hectare, a strong incentive that leads to conversion of cropland to forest.

Results show that tactic would increase the incentive to convert cropland to forest at a time in which the climate is expected to decrease crop yields. New technology could emerge to diminish the climate-induced yield reductions, but that has not been included in this analysis.

“When we incorporate the overall adverse effects of climate change on agricultural productivity — the cost for society of providing FCS incentives can become a threat for food security because it increases the competition for land between forestry and agriculture, and that significantly boosts crop prices and land rent,” the authors report. “An aggressive FCS policy drives a major decline in food and livestock production across the world leading to substantial increases in food prices, higher than 200% in many regions for most agricultural sectors, especially emerging economies.”

Tyner said forest carbon sequestration can be a piece, but only a small piece, of the puzzle in addressing climate change without advances in agricultural research that significantly increase crop yields. Carbon taxes, he said, are the most likely effective solution.

“Forest carbon sequestration is not the silver bullet. On a small scale, it’s an efficient way to capture carbon. But if you try to take it too far, forest land competes with cropland, and then the poor would see huge increases in food prices,” Tyner said. “If we want to be serious about climate change, we need to implement carbon taxes to see reductions in emissions.”

The work aligns with Purdue’s Giant Leaps celebration, acknowledging the university’s global advancements made in sustainability as part of Purdue’s 150th anniversary. Those are the four themes of the yearlong celebration’s Ideas Festival, designed to showcase Purdue as an intellectual center solving real-world issues.

Climate change can negatively affect crop productivity decreasing food production in many regions across the world. Literature suggests forest carbon sequestration (FCS) is a good alternative to mitigate climate change due to its ability to sequester carbon at low cost. Nevertheless, FCS subsidies have not been addressed together with impacts on food security and climate change reduced crop yields. In our multidisciplinary work, we collected the crop yield shocks from global circulation—crop modeling. We also developed a new version of a computable general equilibrium model for the economic analysis. Thus, we evaluate the global economic impacts of using carbon taxes and FCS to achieve 50% emission reductions. We find that implementing an aggressive FCS incentive can cause substantial increases in food prices because of land competition between forest and crop production. Without climate induced yield reductions, FCS is attractive, but not with the yield reductions. With the climate induced yield shocks, food price increases are huge—so large that it is clear this approach could not be adopted in the real world. The results cry out for investment in agricultural research on climate adaptation. Our findings suggest economic well-being falls more without mitigation than with 50% emission reductions.