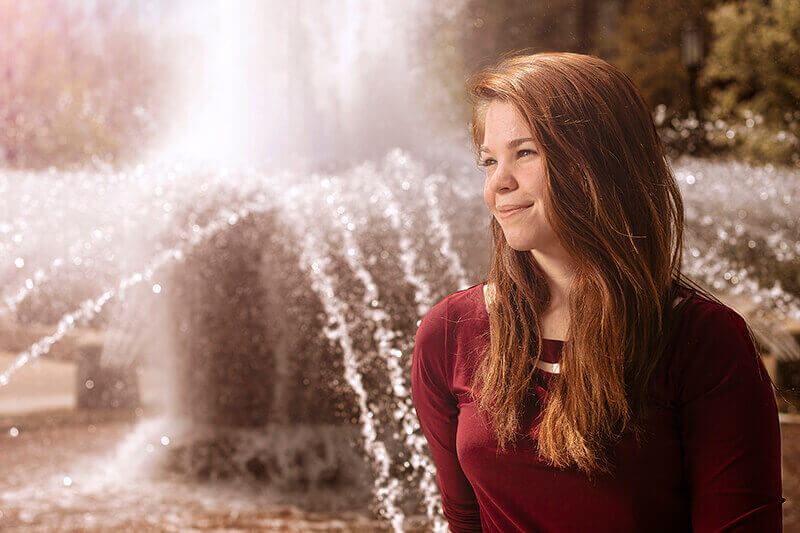 Eryn Sale, a junior at Purdue University, says Purdue Promise, a four-year program at Purdue offering additional financial assistance and one-on-one coaching for eligible Indiana’s 21st Century Scholars, has made her vision of studying the root causes of mental illness a reality. Sale was motivated to study mental illness after two of her sisters were diagnosed with different mental illnesses during her childhood. (Purdue University photo/Rebecca Wilcox)

Sale knew early on she wanted to channel those experiences into something that would help others by studying the root causes of mental illnesses, and what can be done to treat them. What she didn’t know was how she was going to make that happen.

That’s where Purdue Promise came in, a four-year program at Purdue University offering additional financial assistance and one-on-one coaching for eligible Indiana’s 21st Century Scholars. Sale, a native of Lafayette, Indiana, is now a junior at Purdue, double majoring in neurobiology and genetics, with minors in both physics and math. She plans on going to grad school and eventually becoming a professor of biophysics. She’s on track to graduate from Purdue within four years while accruing little to no debt.

“Purdue Promise made all the difference, both financially and personally,” Sale said. “I don’t think my college career would have been possible without it.”

Sale admits Purdue wasn’t her first choice. But after learning about the award-winning Purdue Promise program and learning more about Purdue’s College of Science, Sale said the decision was easy.

“I knew I could just focus on school without having to juggle multiple jobs and worrying about how I was going to afford the next semester,” she said. “Purdue Promise made me feel like my goals were attainable and that the vision I’ve had could become a reality.”

Sale’s vision for her future came from watching one of her older sisters struggle after being diagnosed with schizoaffective disorder, which is a combination of schizophrenia and a mood disorder, which, in her sister’s case, is bipolar disorder.

“Life at home was chaotic at times, and it was hard to watch my mom feel helpless as she watched my sister try to cope with this illness that at times made her unpredictable,” Sale said. “My mom is a single mom of four, and having to juggle raising the four of us on top of trying to both help and understand my sister’s mental health was far from easy.”

Sale has another sister with a mental illness, borderline personality disorder. While her symptoms have been more manageable, Sale said it was still hard to treat at times.

“It’s hard to watch the people that mean the most to you struggle like that,” Sale said.

Sale knew her plate was going to be full when she first came to Purdue, and on top of that, she knew mapping out her future was going to be overwhelming. She quickly turned to the resources available through Purdue Promise to find that support.

Purdue Promise has more than 1,200 students, and each student works with a coach throughout their four years at Purdue. Coaches monitor the students’ progress, help them find resources, and address issues that may affect their success and financial aid eligibility.

Coaches receive 116 hours of training their first year and typically have degrees in higher education, student affairs, social work or counseling. Michelle Ashcraft, director of Purdue Promise, says the diverse backgrounds of the coaches allow them to help students not only academically, but also with the range of issues that students might bring with them.

Sale said the resources she found through her coaches helped her navigate both financial and academic concerns.

“Being able to sit down with someone and just talk without feeling the pressure to have a plan right away was a big stress reliever,” she said. “My Purdue Promise coaches have been able to talk me through just about anything I’ve come to them about.”

Sale is involved with two different research labs and multiple clubs at Purdue, including the American Sign Language Club. Being able to focus on research, especially as an undergraduate, has allowed Sale to make her dreams become a reality, one day at a time.

“I’ve learned just how important research is to help us understand the factors that go into mental illnesses and how we can help treat and prevent them in the future,” Sale said. “We have a long way to go, but we’re making progress.”

Purdue Promise recently received several awards from the Student Affairs Administrators in Higher Education (NAPSA). The program received a Gold Excellence Award in the category of Enrollment Management, Financial Aid, Orientation, Parents, Persistence, First-year, Other-year, and related. NAPSA selected the program from all of the category Gold recipients to receive Grand Gold, which is the highest award for a program though NAPSA.

“It changed my life,” Sale said of Purdue Promise. “I know it’s going to change other people’s lives too.”

Note to Journalists: A video about the impact of the Purdue Promise program is available at https://www.youtube.com/watch?v=d5vGrmj4B_U&feature=youtu.be.