How would you survive on Mars?

WEST LAFAYETTE, Ind. — The Resilient ExtraTerrestrial Habitats Institute is working to ensure that the first long-term settlement on other planetary bodies are safe from hazards such as a meteoroid colliding with the moon or violent sandstorms on Mars.

Shirley Dyke, head of Purdue University’s RETH Institute, said she noticed that the habitats on other planets portrayed on TV don’t look realistic. In order to keep occupants alive, a habitat system on another planet would have to be much more sophisticated, even smart.

“We decided to start looking not at how do we get to Mars, but rather how do we thrive there once we arrive,” said Dyke, a professor of mechanical and civil engineering. “How do we actually build habitats that can sustain life and deal with all the hazards but still keep people comfortable and keep things moving in terms of exploration and science?”

As part of the research, the RETH Institute will build a quarter-scale habitat as realistically as possible in Purdue’s Herrick Labs. This structure with the various subsystems would allow some components to be physically tested, while others are examined in a virtual context. 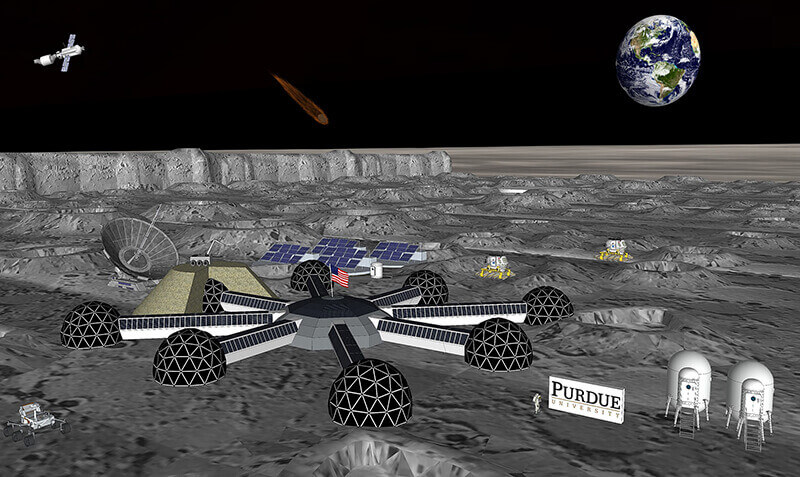 Members of Purdue University’s new Resilient ExtraTerrestrial Habitats Institute are studying the hurdles in building habitats like this on the moon or Mars. (Purdue University photo/RETH Institute) Download image

“The idea is we can swap pieces in and out to examine different aspects of the habitat system,” Dyke said. “We can look at the interactions among the subsystems and understand how to make them robustly perform the way they need to.”

The research is focused on three specific habitat characteristics: resilience, intelligence and autonomy. The goal is to develop smart habitats that can respond to changes and anything that could go wrong during a mission and still maintain the integrity and safety of the occupants and science inside.

Dyke said the resilience level is key to the work, creating habitats that can stand up to any number of hazards. That includes some not normally a problem on Earth.

“The biggest issue is the extreme hazards these habitats are going to have to be able to deal with,” she said. “What happens when there is radiation exposure, a Marsquake or a sandstorm and how do we build a habitat that can survive and adapt to deal with all of those things.”

Part of the habitat’s survival also is being aware of problems when they occur. Multiple types of sensing equipment will be investigated to determine the best way to monitor not only the structural status of the habitat, but also its systems, including life support and environmental controls.

Autonomous robotics also will be examined as a way of identifying, diagnosing and fixing structural and systematic issues when they occur.

“In an extreme environment such as space, if the HVAC goes out or if the structure is breached in some way, then the environmental controls are affected,” Dyke said. “Cascading failures can occur and you need to keep a tight rein on the condition of your habitat so if something goes wrong you have to be able to fix it or be aware of the consequences if you don’t.”

The RETH Institute is an interdisciplinary partnership of as many as 21 researchers from Purdue and three other universities and two industrial partners to study what is necessary for otherworldly habitats.

The initial RETH research began in 2017 at Purdue through funding from the Provost’s Office. The creation of the RETH Institute recently was announced as as part of funding totaling $15 million over a five-year period from NASA’s Space Technology Mission Directorate.

Dyke said ultimately the goal of the habitat is to serve humans. But not every module will have a continuous human presence.

The work aligns with Purdue's Giant Leaps celebration, acknowledging the university’s global advancements made in space and sustainability as part of Purdue’s 150th anniversary. These are two of the four themes of the yearlong celebration’s Ideas Festival, designed to showcase Purdue as an intellectual center solving real-world issues.