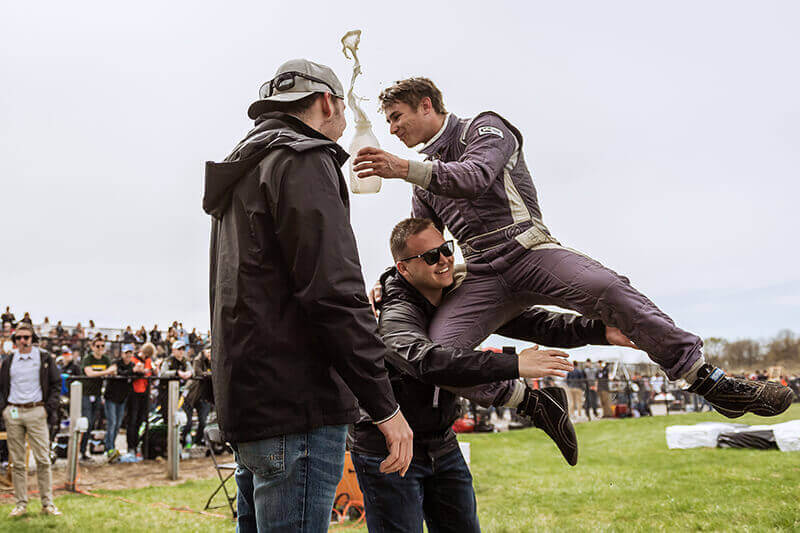 Brenden Johnson, winner of the 62nd Purdue University Grand Prix, leaps with excitement into the arms of a friend as the traditional winner’s milk goes flying. (Purdue University photo/Rebecca Wilcox)

The No. 4 kart driven by Johnson, a senior from the Motorsports Club at IUPUI, took the win at the 62nd Purdue Grand Prix on Saturday (April 13). Johnson, a two-time Grand Prix runner-up, finally had his moment to celebrate after a bit of patience and reminding himself that speed doesn’t always equate to a win.

“During the last 30 laps, I knew my tires were starting to become an issue and I was worried I wasn’t going to make it to the end,” Johnson said after the race. “But I went slow and kept a good pace and didn’t try to overdo it. I really do believe luck carried me through at the end.” 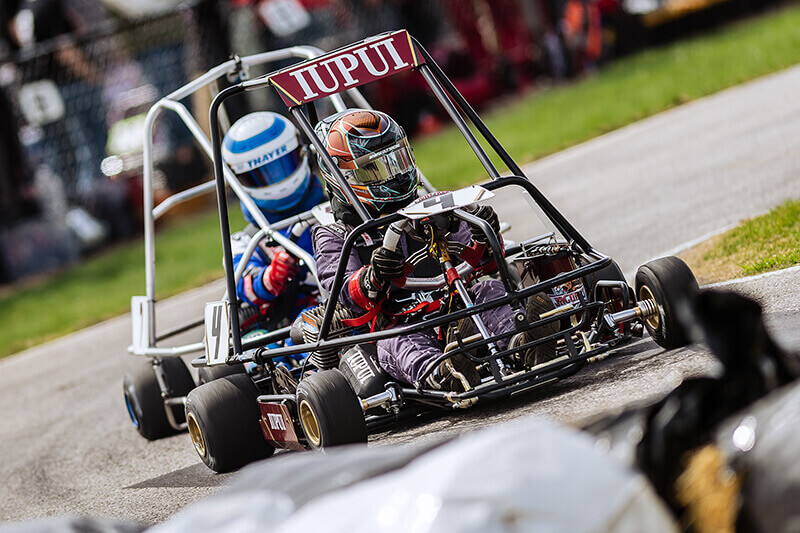 Brenden Johnson is being pressed from behind on his way to winning the Purdue Grand Prix on Saturday (April 13). (Purdue University photo/Rebecca Wilcox) Download image

This was Johnson’s fourth attempt at the Grand Prix. He crashed out one year, so Saturday was a bit of a redemption story for him too.

Thirty-three student drivers competed. Johnson ran near the front for most of the race and said the last three races helped prepare him for the concentration he needed to stay on top.

“It’s a long race, and everyone gets tired at some point, but having the last couple of races in the back of my mind helped me stay in it mentally,” Johnson said.

Johnson started racing when he was 7 years old, cultivating a lifelong passion that was on display at the finish line on Saturday.

“It’s hard to find words,” Johnson said as he held his trophy. “Moments like this make those second-place finishes and wrecks worth it.”

The event is sponsored by the Purdue Grand Prix Foundation. The foundation is built on the motto of “Students Helping Students” and works to raise over $10,000 annually to award in the form of scholarships. The foundation is a student-led organization and consists of 10 senior board directors, two advisers and a junior board staff.