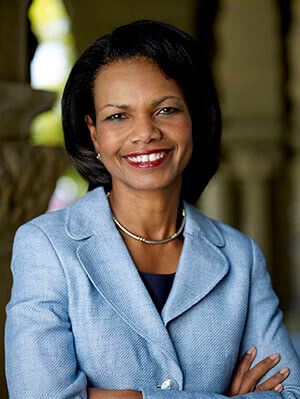 Rice will speak as part of Purdue’s Giant Leaps Series as part of the 150th anniversary celebration. The sesquicentennial celebration draws inspiration from Purdue alumnus Neil Armstrong’s historic first steps on the moon, and the celebration will conclude with an astronaut reunion at Homecoming.

The event is free with a ticket. Tickets will become available this fall and more information will be available online.

Rice served as secretary of state under President George W. Bush from January 2005 to 2009. She was the second woman and first African American woman to hold the position. From 2001-05, Rice was the first woman to serve as the national security adviser.

Rice has an extensive background in higher education. She has been on staff at Stanford University as a professor of political science since 1981 and has won two of the highest teaching honors, the Walter J. Gores for Excellence in Teaching in 1984, and the School of Humanities and Sciences Dean’s Award for Distinguished Teaching in 1993. Rice also served as Stanford’s provost for the institution’s chief budget and academic officer from 1993-99.

Rice received her bachelor’s degree in political science from the University of Denver, her master’s from the University of Notre Dame and her doctorate from the Graduate School of International Studies at the University of Denver. She has received 15 honorary doctorates. Besides being a professor of political science at Stanford, Rice also currently serves as the Denning Professor in Global Business and the Economy at the Stanford Graduate School of Business, and the Thomas and Barbara Stephenson Senior Fellow on Public Policy at the Hoover Institution.