Cities living with a strong chance of rain 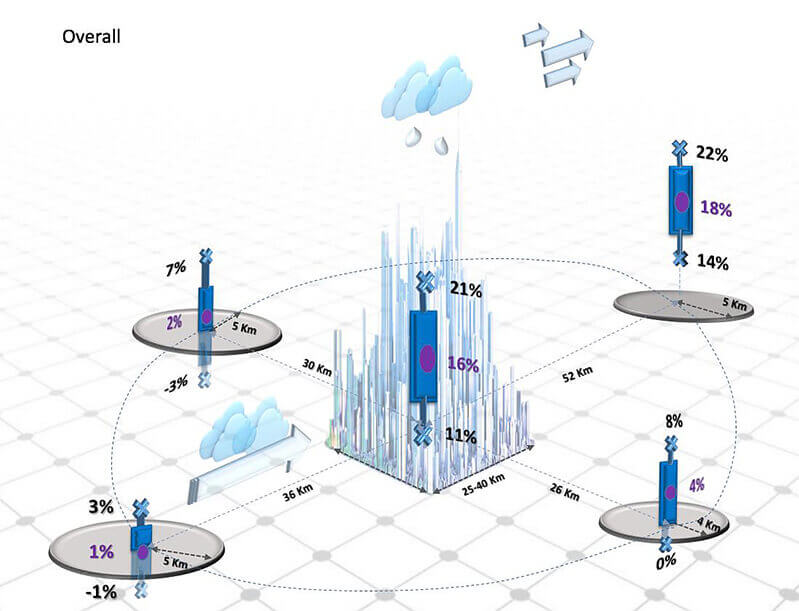 A Purdue University meta-analysis finds that urban areas increase rainfall not just downwind, but over cities themselves. Download image

WEST LAFAYETTE, Ind. – Heavy rain can overwhelm municipal infrastructure and lead to flooding that can threaten lives and property. The U.S. alone spends millions - and sometimes billions - of dollars per year on flood recovery, and more is spent around the world.

A Purdue University study led by Dev Niyogi, a professor of agronomy and earth, atmospheric and planetary sciences, with statistics and data science graduate student Jie Liu, shows that the heat, humidity and pollution encountered by storms over cities can increase rainfall significantly not only downwind, as previous studies have shown, but also over the city. That information can help those in new or expanding communities plan their infrastructure accordingly.

“Reviewing all the quantifiable evidence that can be used, we can state unambiguously that cities affect rainfall,” said Niyogi, whose findings were published in the journal Scientific Reports. “There is more heating in a city, more moisture from human activities and pollution from aerosols that store energy and add them to a storm. What we get is both increased rainfall over the city and downwind.”

Based on a statistical meta-analysis of 85 studies that quantified rainfall change over and around urban areas, Niyogi and Liu found that the heat, moisture, and pollution of a city increase rainfall 16 percent over the city and 18 percent downwind, but less than 5 percent to the left and right of the storms.

Niyogi said tall buildings associated with cities push wind to the left and right, causing the small increases in those directions. The conditions in a city increase the storm’s capacity, leading to rain over and downwind of the urban area.

“When a storm reaches a city, the punch becomes bigger, more violent,” Niyogi said. “It can precipitate like a balloon bursting, right over the city or just past the city.”

Cities are more densely populated than ever, Niyogi said, increasing the frequency of climate-related disasters such as flooding. That makes informed municipal planning key to protecting lives and property.

“The regions in and around cities are going to be more vulnerable to storms and flooding, and we should consider this threat potential when considering future development, stormwater discharge and carrying capacity,” Niyogi said. “We need to have infrastructure that can handle precipitations in urban areas.”

Niyogi also called on colleagues to consider how they present their findings when it comes to urban rainfall studies. After reviewing more than 2,000 published papers, only about 85 studies from 48 papers had data to develop quantifiable findings. Most of the papers did not provide information that could be translated for the broader community.

“Every published study was useful for advancing our understanding; however, if our goal here is that the research that has matured can be usable for the broader community, can be applied for disaster resiliency, then we should not be simply presenting the idea and discuss processes, but also make an attempt at giving quantifiable numbers and empirical guidelines that can be used to link and bridge information from study to study,” Niyogi said.

The National Science Foundation, the U.S. Department of Agriculture and the Indian Ministry of Earth Sciences supported this research.

Even though it is known that urbanization affects rainfall, studies vary regarding the magnitude and location of rainfall change. To develop a comprehensive understanding of rainfall modification due to urbanization, a systematic meta-analysis is undertaken. The initial search identified over 2000 papers of which 489 were carefully analyzed. From these papers, 85 studies from 48 papers could be used in a quantitative meta-analysis assessment. Results were analyzed for case studies versus climatological assessments, observational versus modeling studies and for day versus night. Results highlight that urbanization modifies rainfall, such that mean precipitation is enhanced by 18% downwind of the city, 16% over the city, 2% on the left and 4% on the right with respect to the storm direction. The rainfall enhancement occurred approximately 20–50km from the city center. Study results help develop a more complete picture of the role of urban processes in rainfall modification and highlight that rainfall increases not only downwind of the city but also over the city. These findings have implications for urban flooding as well as hydroclimatological studies. This meta-analysis highlights the need for standardizing how the results are presented in future studies to aid the generalization of findings.