Refillable’ technology could provide enough energy to drive an electric car up to 3,000 miles


Technology using a membrane-free, flow battery is showing success in powering golf carts and other applications.

WEST LAFAYETTE, Ind. – A new type of electric vehicle power using “refillable” technology has taken another giant leap in advancing alternative energy with testing that shows it could provide enough energy to run a car for about 3,000 miles.

The technology employs a novel type of “flow” battery that is being successfully tested in golf carts. It was first showcased in 2017. Click here for a video about the technology.

“The jump that this technology has made in the past two years is a testament to its value in changing the way we power our vehicles,” said John Cushman, Purdue University distinguished professor of earth, atmospheric and planetary sciences and a professor of mathematics. “It’s a game-changer for the next generation of electric cars because it does not require a very costly rebuild of the electric grid throughout the US.  Instead, one could convert gas stations to pump fresh electrolyte and discard depleted electrolyte and convert oil-changing facilities to anode replacing stations. It is easier and safer to use and is more environmentally friendly than existing battery systems.” 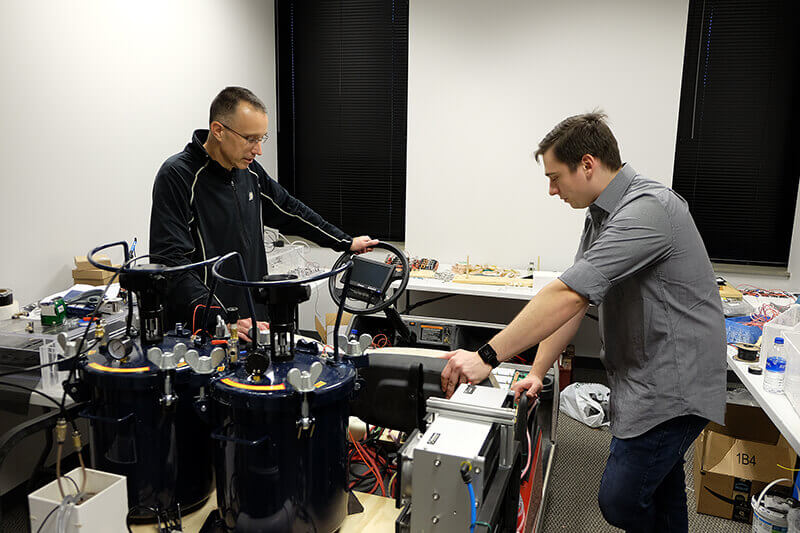 Eric Nauman, professor in mechanical engineering, biomedical engineering, and in basic medical sciences and co-founder of IFBattery, and Michael Dziekan, senior engineer for IFBattery, run tests on a membrane-free, flow battery being used to power a golf cart. The battery has the potential to generate enough energy to drive an electric car up to 3,000 miles. (Lyna Landis, Purdue Research Foundation) Download image

The technology uses a patented technology that is safe and affordable for recharging electric and hybrid vehicle batteries by replacing the fluid in the batteries about every 300 miles through a process similar to refueling a car at a gas station. Every 3,000 miles, the anode material is replaced, taking less time than is needed to do an oil change and costing about the same with an estimated cost of about $65.

“The battery does two things: it produces electricity and it produces hydrogen. That is important because most hydrogen-powered cars run on a 5,000 or 10,000 PSI [pounds per square inch] tank, which can be dangerous,” said Michael Dziekan, senior engineer for IFBattery. “This system generates hydrogen as you need it, so you can safely store hydrogen at pressures of 20 or 30 PSI instead of 10,000.”

The flow battery technology was first tested in scooters and then larger off-road vehicles. The next step will be industrial equipment and then automobiles, according to Cushman.

“Conventional electric cars like Tesla have lithium-ion batteries that are usually plugged in overnight. Our flow battery uses a water-based single fluid that can run the car like it is a gas engine except it is not burning anything – it’s like a hybrid of a battery and a gas,” Nauman said.

Without using a membrane or separator, the single-fluid technology oxidizes the anode to produce electrons, and through a reduction at the cathode, it generates the current of energy to power vehicles.  The oxidant is a macro-molecule that lives in the electrolyte, but is reduced only at the cathode.

“We are at the point now where we can generate a lot of power. More power than you would ever guess could come out of a battery like this,” Cushman said.

The spent battery fluids or electrolytes can be collected and taken to a solar farm, wind turbine installation or hydroelectric plant for recharging.

“It is the full circle of energy with very little waste,” Cushman said. “IFBattery’s components are safe enough to be stored in a family home, are stable enough to meet major production and distribution requirements and are cost-effective.”

IFBattery licensed part of the technology through the Purdue Research Foundation Office of Technology Commercialization and has developed patents of its own.

The technology aligns with Purdue's Giant Leaps celebration of the university’s global advancements made in health, space, artificial intelligence and sustainability as part of Purdue’s 150th anniversary. Those are the four themes of the yearlong celebration’s Ideas Festival, designed to showcase Purdue as an intellectual center solving real-world issues.