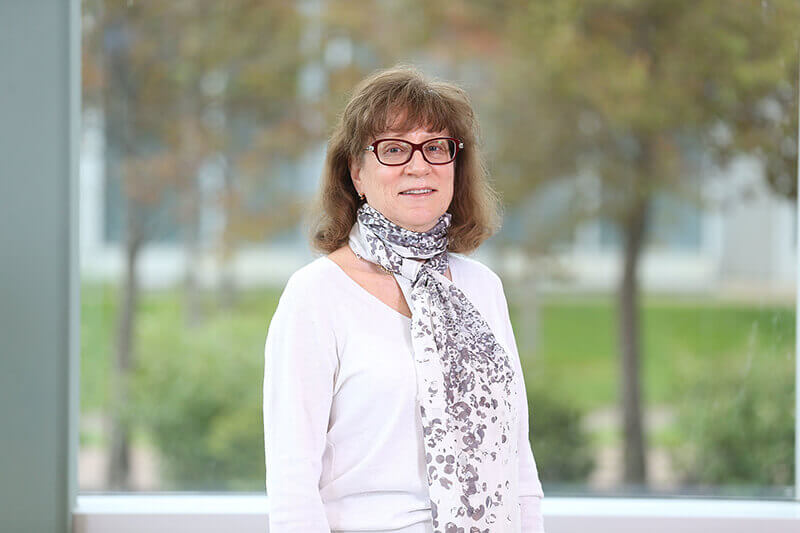 Natalia Dudareva and colleagues identified a complete alternative pathway for the production of phenylalanine in plants. The compound is a precursor to others that are thought to have uses as flavors, fragrances, biofuels, pharmaceuticals and insecticides. Download image

Phenylalanine is a building block of proteins and the precursor to thousands of compounds. Plants use these compounds as aromatics to attract pollinators, for defense, reproduction, growth and development. Humans must get phenylalanine from plants, and they also use natural products derived from this compound in flavors, fragrances, biofuels, insecticides and pharmaceuticals.

It had long been accepted that plants employ one biological pathway to produce phenylalanine, but this did not explain all observed production of the compound. Dudareva, a Purdue distinguished professor in the Department of Biochemistry and researcher in the Purdue Center for Plant Biology, recently discovered the final step in the alternative pathway. Now she, along with graduate student Yichun Qian and research scientist Joseph Lynch from her lab, and collaborators John Morgan and his student Longyun Guo from Purdue’s Davidson School of Chemical Engineering, have identified remaining steps, completing the picture.

The key finding, reported in the journal Nature Communications, is that the entire process happens in the cytoplasm rather than cell organelles called plastids.

“It splits completely at a different point than predicted, and the whole pathway is localized in cytoplasm. This was unexpected,” Dudareva said. “The gene responsible for the committed step has been known for 20 years and was never, until now, considered to be involved in production of phenylalanine.”

Phytochemicals derived from phenylalanine are thought to have uses for a broad range of cancer treatments, as well a pain management, depression and Parkinson’s disease, among others. Obtaining these compounds from plants has been difficult because of several tightly regulated steps that occur when the phenylalanine precursor is made in the plastids of cells. By uncovering this second pathway in cytoplasm, which is less stringently controlled, biotechnological methods for enhancing yield of phenylalanine can be developed.

“A next step will be to use this newly discovered pathway with relaxed regulation to produce more phenylalanine and phenylalanine-derived compounds, which we may explore in future,” Dudareva said.

The National Science Foundation and the U.S. Department of Agriculture’s National Institute of Food and Agriculture supported this research.

Completion of the cytosolic post-chorismate phenylalanine biosynthetic pathway in plants

In addition to being a vital component of proteins, phenylalanine is also a precursor of numerous aromatic primary and secondary metabolites with broad physiological functions. In plants phenylalanine is synthesized predominantly via the arogenate pathway in plastids. Here, we describe the structure, molecular players and subcellular localization of a microbial-like phenylpyruvate pathway for phenylalanine biosynthesis in plants. Using a reverse genetic approach and metabolic flux analysis, we provide evidence that the cytosolic chorismate mutase is responsible for directing carbon flux towards cytosolic phenylalanine production via the phenylpyruvate pathway. We also show that an alternative transcription start site of a known plastidial enzyme produces a functional cytosolic prephenate dehydratase that catalyzes the conversion of prephenate to phenylpyruvate, the intermediate step between chorismate mutase and phenylpyruvate aminotransferase. Thus, our results complete elucidation of phenylalanine biosynthesis via phenylpyruvate in plants, showing that this pathway splits from the known plastidial arogenate pathway at chorismate, instead of prephenate as previously thought, and the complete pathway is localized in the cytosol.