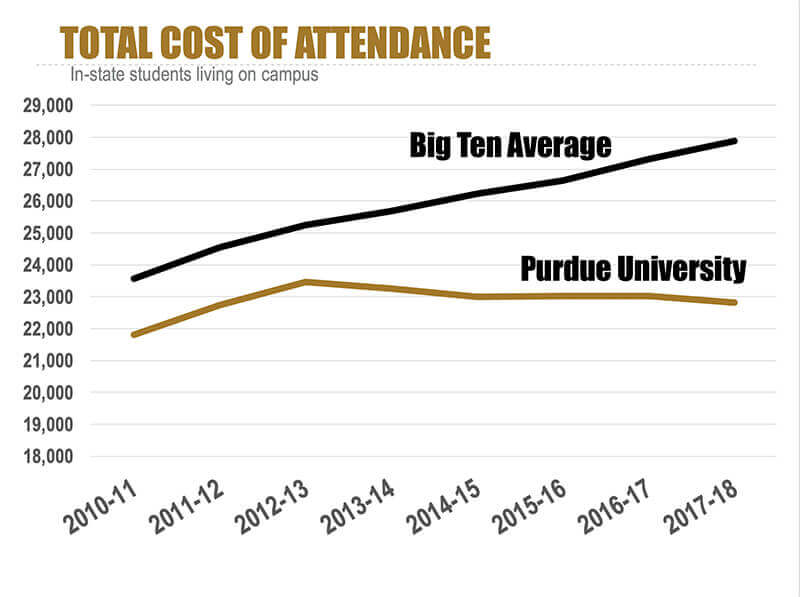 WEST LAFAYETTE, Ind. — Purdue University President Mitch Daniels announced Monday (Feb. 18) that Purdue plans to hold tuition at 2012 levels for an eighth consecutive year — through the 2020-21 academic year — and will provide a one-time $500 appreciation payment this spring to all West Lafayette campus staff who make $75,000 or less and who were employed as of Dec. 31, 2018. Eighty-three percent of all non-faculty Purdue associates will receive the one-time payment.

In addition, Daniels said the university will offer a 2.5 percent merit raise pool for West Lafayette faculty and staff for the fiscal year that will begin July 1, the fifth consecutive year for a merit increase.

“Our staff members’ suggestions, flexibility and productivity have helped make our affordability policies possible,” Daniels said. “We think it’s time for a modest gesture of appreciation for all they do.”

Tuition at West Lafayette will remain constant for the eighth year in a row, meaning six graduating classes will have earned their Purdue degrees without ever having a tuition increase, and Indiana residents continue to pay less than $10,000 per year in tuition. Combined with room and board rates that have been held flat or lowered, current students’ total cost of attendance is lower than in 2012-13. The last time a tuition increase was announced at Purdue was when today’s freshmen were in elementary school.

“As long as we are balancing our operating budget, growing our faculty, investing in necessary capital projects, and increasing compensation competitively, we see no good reason to charge our students more,” Daniels said. “Our commitment to affordability has helped save families millions of dollars and, coupled with prioritizing our investments, we continue to believe that Purdue is delivering higher education at the highest proven value.” 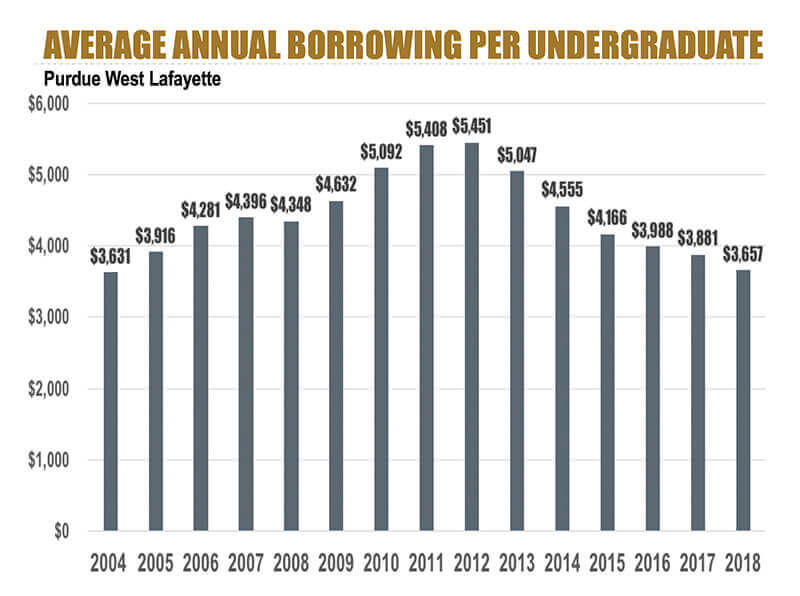 Affordability measures are producing measurable results. Purdue has seen an increase in student applications and enrollment — Purdue’s incoming freshman class in fall 2018 was the largest ever at 8,357. And students and their families are better able to manage the cost of college — total student borrowing is down 31 percent since 2011-12, and the loan default rate three years past graduation for Purdue borrowers who graduate is 0.8 percent compared with 2.5 percent in 2011.

At the same time, Purdue is seeing dramatic increases in fundraising and sponsored research, and has invested more than a quarter-billion dollars since fiscal year 2016 for necessary capital projects and priority initiatives.

Giving to Purdue was a record $451.5 million in fiscal 2018, the first time that donors — alumni, faculty, staff, retirees, students, corporations, foundations, parents and friends — contributed more than $400 million to the university in one year with gifts targeted to student support, buildings and capital projects, endowments for faculty and research, among other initiatives. Sponsored research programs set a record for the fourth straight year, bringing in $454.5 million, and Purdue reached a milestone in startup creation with 223 total startups since 2013, and a record 128 U.S. patents issued for fiscal 2018.