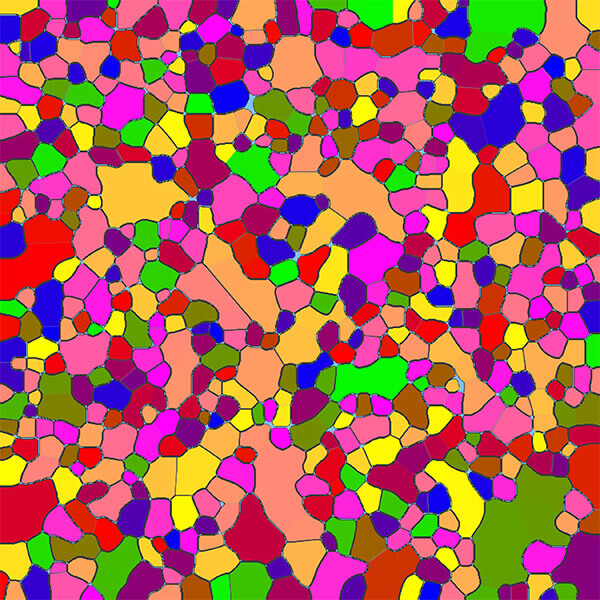 WEST LAFAYETTE, Ind. – A new theory could enable researchers and industry to tune and improve the performance of a material called ionic ceramics in rechargeable batteries, fuel cells and other energy applications.

Ionic ceramics are made up of many faceted “grains” that meet at boundaries in ways that affect, for example, how much power a fuel cell can deliver or how fast a battery can be recharged and how long it can hold a charge.

“My cell phone has a (fixed) amount of charge, and those grain boundaries are a limiting factor,” to how much of that charge is indeed useful said Edwin García, a professor of materials engineering at Purdue University.

One challenge in perfecting technologies that use ionic ceramics is overcoming the insulating effects of the grain boundaries (interfaces between grains), which undergo “phase transitions” (structural and electrochemical changes), thus impacting material properties.

“It’s a problem that has existed in the field of ceramics for the last 40 years,” he said. However, it was not until these last 10 years when scientists realized that interfaces (2D materials), just like bulk phases (3D materials) can undergo phase transitions.

Working with García, doctoral student Suryanarayana Karra Vikrant led research to develop the new theory, which describes what happens at the interface between the tiny grains. The work extends the pioneering research of John Cahn for metal, who was awarded a 1998 National Medal of Science and was a researcher at the Massachusetts Institute of Technology and the National Institute of Standards and Technology.

“The theory shows these interfaces are undergoing phase transitions, which had not been [identified as such] before,” García said.

The 2D phase transitions may include changes in charge, voltage, and structural “disorder,” which affects the material’s properties across a 10nm scale, but impacting performance, properties, and degradation at the macro scale.

The theory was validated using yttria-stabilized zirconia, or YSZ, a material in solid oxide fuel cell applications. Findings are detailed in a research paper appearing Wednesday (Feb. 20) in the Nature journal Computational Materials.

“From a basic-science perspective, this work is very cool, but it’s also relevant to energy applications,” García said.

For example, he said, being able to better engineer interfacial ceramics could bring fuel cells and batteries that hold a charge longer and can be charged faster than now possible. This is because interfacial phase transitions can cause the grain boundaries to become insulators, interfering with a battery’s performance.

“So, this theory is a first step in tuning these [2D phases in bulk] ceramics,” he said.

The theory applies not only to YSZ, but also to other ceramics that could bring solid-state batteries, or batteries that contain no liquid electrolyte, an advance that offers various potential advantages over conventional lithium-ion batteries. They would be lighter and safer for electric vehicles, eliminating the danger of leaking or flammable electrolyte during accidents.

The findings also have implications for the design of ceramics for ferroelectric and piezotronics applications, which are aimed at computer memories, energy technologies and sensors that measure stresses in materials. Advanced designs could reduce energy consumption in these applications.

Future research include work to demonstrate the theory with experimental results in batteries and to learn about the dynamic behavior of grain interfaces.

The research was funded by the U.S. Office of Naval Research.

The work aligns with Purdue's Giant Leaps celebration, acknowledging the global advancements in health, longevity and quality of life as part of Purdue’s 150th anniversary. Sustainability is one of the four themes of the yearlong celebration’s Ideas Festival, designed to showcase Purdue as an intellectual center solving real-world issues.

Surfaces and interfaces in ionic ceramics play a pivotal role in deﬁning the transport limitations in many of the existing and emerging applications in energy-related systems such as fuel cells, rechargeable batteries, as well as advanced electronics such as those found in semiconducting, ferroelectric, and piezotronic applications. Here, a variational framework has been developed to understand the effects of the intrinsic and extrinsic ionic species and point defects on the structural and electrochemical stability of grain boundaries in polycrystalline ceramics. The theory predicts the conditions for the interfacial electrochemical and structural stability and phase transitions of charged interfaces, and quantiﬁes the properties induced by the broad region of electrochemical inﬂuence in front of a grain boundary capable of spanning anywhere from a few angtroms to entire grains. We demonstrate the validity of this theory for YxZr1−xO2−x/2, cubic YSZ. For small crystallographic misorientations, sharp Debye-type interfaces, D(1): CVYSVY, are favored and promote high ionic conductivity in materials in polycrystalline form. For large grain boundary misorientations and large amounts of [Y2O3] substitutions, three Mott–Schottky interfaces, MS(2):CVY heSVYhe, MS(2):CVYheSehVY, and MS(2):CVYShe are responsible for controlling grain boundary segregation and the observed poor macroscopic ionic transport, in great agreement with the scientiﬁc literature.