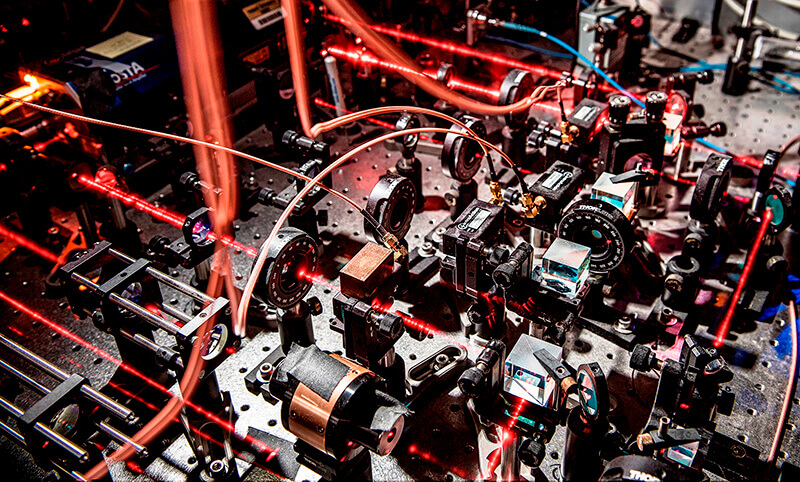 Purdue University researchers used lasers to trap and cool atoms down to nearly absolute zero, at which point they become a quantum fluid known as Bose-Einstein condensate, and collided condensates with opposite spins. (Purdue University photo/Purdue Quantum Center) Download image

WEST LAFAYETTE, Ind. — Researchers have created a new testing ground for quantum systems in which they can literally turn certain particle interactions on and off, potentially paving the way for advances in spintronics.

Spin transport electronics have the potential to revolutionize electronic devices as we know them, especially when it comes to computing. While standard electronics use an electron’s charge to encode information, spintronic devices rely on another intrinsic property of the electron: its spin.

Spintronics could be faster and more reliable than conventional electronics, as these devices use less power.  However, the field is young and there are many questions researchers need to solve to improve their control of spin information. One of the most complex questions plaguing the field is how the signal carried by particles with spin, known as spin current, decays over time.

“The signal we need to make spintronics work, and to study these things, can decay. Just like we want good cell phone service to make a call, we want this signal to be strong,” said Chuan-Hsun Li, a graduate student in electrical and computer engineering at Purdue University. “When spin current decays, we lose the signal.”

In the real world, electrons don’t exist independently of everything around them and behave exactly how we expect them to. They interact with other particles and among different properties within themselves. The interaction between a particle’s spin (an intrinsic property) and momentum (an extrinsic property) is known as spin-orbit coupling.

According to a new paper in Nature Communications, spin-orbit coupling and interactions with other particles can dramatically enhance spin current decay in a quantum fluid called Bose-Einstein condensate (BEC).

“People want to manipulate spin formation so we can use it to encode information, and one way to do this is to use physical mechanisms like spin-orbit coupling,” Li said. “However, this can lead to some drawbacks, such as the loss of spin information.”

The experiment was done in the lab of Yong Chen, a professor of physics and astronomy, and electrical and computer engineering at Purdue, where his team created something like a mini particle collider for BECs. Using lasers, Rubidium-87 atoms within a vacuum chamber were trapped and cooled nearly to absolute zero. (Physics junkies may recall that laser cooling technologies won the Nobel Prize in physics in 1997. Laser trapping won the Prize in 2018.)

At this point, the atoms become a BEC: the coldest and most mysterious of the five states of matter. As atoms get colder, they start to display wave-like properties. In this quantum state, they have an identity crisis; they overlap with one another and stop behaving like individuals. Although BEC isn’t technically a gas, this might be the easiest way to picture it – physicists casually refer to it as quantum fluid or quantum gas.

Inside the mini quantum fluid collider, Chen’s team sent two BECs with opposite spins smashing into one another. Like two clouds of gas would, they partially penetrate each other, delivering a spin current.

“A lot of fascinating phenomena occur when you collide two condensates. Originally, they’re superfluid, but when they collide, part of the friction can turn them to thermal gas,” Chen said. “Because we can control every parameter, this is a really efficient system to study these kinds of collisions.”

Using this system, researchers can literally turn spin-orbit coupling on and off, which allows them to isolate its effect on spin current decay. This can’t be done with electrons in solid-state materials, which is part of what makes this system so powerful, Chen said.

So-called quantum gas is the cleanest system man can make. There’s no disorder, which makes it possible to create a pure spin current and study its properties. Chen hopes to keep using this experimental testing ground and their bosonic spin current to further explore many fundamental questions in spin transport and quantum dynamics.

“One important challenge for spintronics and other related quantum technologies is to reduce decay so we can propagate spin information over longer distances, for longer times,” he said. “With this new knowledge of the role of spin-orbit coupling, this may help people gain new insights to reduce spin decay and potentially also design better spintronic devices.”

Understanding the effects of spin-orbit coupling (SOC) and many-body interactions on spin transport is important in condensed matter physics and spintronics. This topic has been intensively studied for spin carriers such as electrons but barely explored for charge-neutral bosonic quasiparticles (including their condensates), which hold promises for coherent spin transport over macroscopic distances. Here, we explore the effects of synthetic SOC (induced by optical Raman coupling) and atomic interactions on the spin transport in an atomic Bose-Einstein condensate (BEC), where the spin-dipole mode (SDM, actuated by quenching the Raman coupling) of two interacting spin components constitutes an alternating spin current. We experimentally observe that SOC significantly enhances the SDM damping while reducing the thermalization (the reduction of the condensate fraction). We also observe generation of BEC collective excitations such as shape oscillations. Our theory reveals that the SOC-modified interference, immiscibility, and interaction between the spin components can play crucial roles in spin transport.