WEST LAFAYETTE, Ind. — It seems like the cakes designed on competitive cooking shows get larger and more intricate every year. From re-creating full play stages to life-size sculptures, bakers often need to have serious architectural skills. They also need to make all of the pieces stick together.

A new soy-based adhesive created in Jonathan Wilker’s lab at Purdue University could solve such problems – although he’s going to leave it up to someone else to figure out how it tastes, he said.

Wilker studies how marine animals, such as oysters and mussels, create natural adhesives. Unlike most glues you’d find in a hardware store, these adhesives are non-toxic, and many hold up underwater. While trying to re-create a new glue in his lab one day, Wilker noticed something strange. 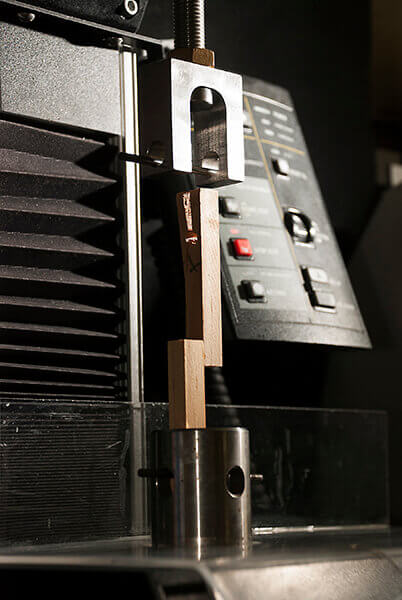 A new natural, non-toxic adhesive is as strong as Gorilla Glue. When two pieces glued together were pulled apart by a machine to test its strength, the wood ripped. (Purdue University photo/Jonathan Wilker) Download image

“Things were sticking when they shouldn’t have been,” he said. “We found that the components being used, proteins and sugar, were reacting and turning into an adhesive.”

This is the essence of Maillard chemistry, or “cooking chemistry,” for those of us who aren’t chemists. It happens when you grill a streak or bake bread in the oven; after a while, the edges start to brown and a savory smell fills the air. Chemically, sugars and proteins are combining to create aromatic compounds.

Usually, it takes heat to kick off this process, but Maillard chemistry is a whole class of messy reactions, and it can happen a few different ways. Products of each reaction get involved in their own reactions and can release chemicals that we experience as flavors. Describing the Maillard reaction in detail would take up an entire book alone, according to PBS.

This new soy-based adhesive doesn’t hold up well under water, so it probably isn’t a perfect replacement for the toxic glues used in plywood and chipboard (the fumes from which, when used to build houses, can be breathed in by homeowners for many years). However, it may find use in packaging of organic-certified food products.

Not only is this new adhesive made from food components, but it’s even stronger than Gorilla Glue on wood. On aluminum, it’s about the same. The findings were published recently in the Journal of the American Chemical Society.

To test the strength of the adhesive, Wilker’s team glued two pieces of wood or aluminum together. The far ends have a hole for a pin, and a machine pulls them in opposite directions to test their strength. The new adhesive was so strong on wood that the pin ripped through the hole.

Although the soy-based adhesive was pretty strong, the team achieved even better results with a different protein, bovine serum albumin (BSA). BSA is a generic protein often used in labs for experiments. It’s cheap for researchers, but not cheap enough to make a BSA-based adhesive affordable on a large commercial scale.

“If you want to break into the adhesive market, your product needs to be cheap, high-performance, and the material also has to be available on large scales,” Wilker said. “This new soy-based adhesive may be able to hit these requirements while also being grown renewably.”

This research was supported by the National Science Foundation and the Office of Naval Research.

In prior generations, proteins were taken from horses and other animals to make glues. Petroleum-derived polymers including epoxies and cyanoacrylates have since replaced proteins owing to improved performance. These modern materials come at a cost of toxicity as well as being derived from limited resources. Ideally, replacement adhesives will be made from benign, cheap, and renewable feedstocks. Such a transition to bio-based materials, however, will not occur until similar or improved performance can be achieved. We have discovered that coupling of proteins and sugars gives rise to strong adhesives. An unexpected connection was made between adhesion and Maillard chemistry, known to be at the heart of cooking foods. Cross-linked proteins bonded metal and wood with high strengths, in some cases showing forces exceeding those withstood by the substrates, themselves. Simple cooking chemistry may provide a route to future high-performance materials derived from low cost, environmentally benign components.