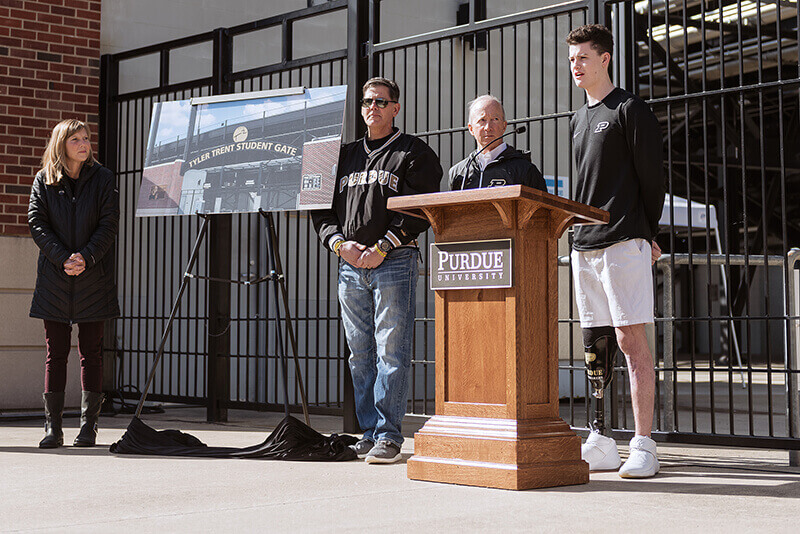 Sean English, the inaugural recipient of the Tyler Trent Courage and Resilience Award, speaks about the honor as, from left, Tyler’s parents Kelly and Tony Trent, and Purdue President Mitch Daniels look on. The Trents unveiled the memorial gate in honor of their son at the entrance of Ross-Ade Stadium as Daniels announced the gate and the scholarship recipient. (Purdue University Photo/Rebecca Wilcox)


WEST LAFAYETTE, Ind. — Purdue University President Mitch Daniels on Wednesday (March 27) announced that a memorial gate leading to the student-section entrance of Ross-Ade Stadium will be erected in honor of Tyler Trent, the Purdue graduate and superfan who died Jan. 1 of cancer. Daniels also announced the first recipient of the Tyler Trent Courage and Resilience Award, a memorial scholarship in Trent’s name funded through a combination of gifts.

Sean P. English, a freshman in exploratory studies from Northville, Michigan, is the scholarship recipient.

“I’m stunned and honored to receive an award that bears Tyler’s name,” English said. “Without this support and that of Purdue University over the past year, I would never have been able to achieve my dream of attending college, let alone an institution such as Purdue.” 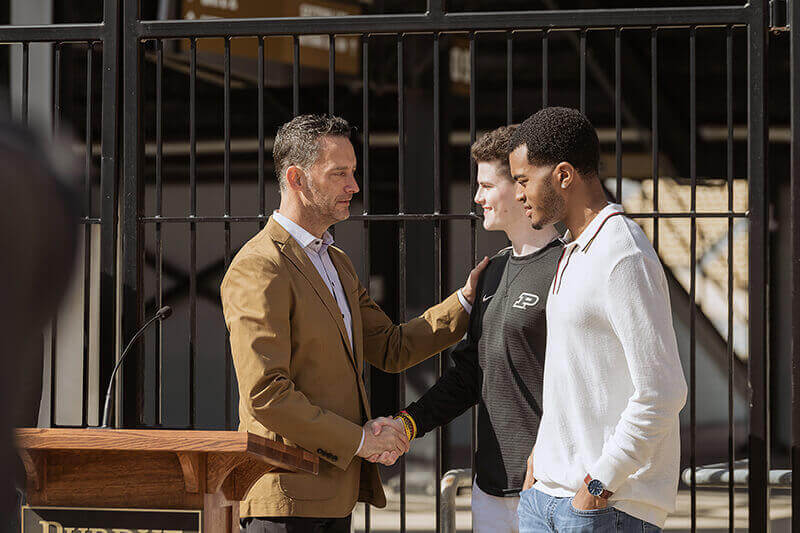 The Tyler Trent Memorial Gate will be erected before the start of the fall football season. It will include gold lettering and the monicker “T2,” Trent’s signature mark. Just to the left of the gate, on Ross-Ade’s brick façade, a plaque with Trent’s image will read “Forever Our Captain.”

The announcements were made during a late-morning ceremony just outside the football stadium, where Trent’s fighting spirit inspired Boilermaker nation and the entire country as he cheered on his team while courageously battling sickness. Among the attendees at the event were Tyler’s parents, Tony and Kelly Trent; English; members of the Ross-Ade Brigade and Paint Crew, the student cheering sections for football and men’s basketball; members of Purdue University Dance Marathon, the student organization that raises funds for Riley Hospital for Children, a charity near to Trent’s heart; several members of Purdue Athletics; and university dignitaries.

“Tyler showed the character and resiliency to which we all should aspire,” Daniels said. “His message of hope and positivity resonated far beyond our campus; it truly touched the entire nation. His story is now a big part of the Purdue history, and this gate and scholarship will serve to preserve it forever.”

Purdue trustees chair Mike Berghoff, founder and president of Lenex Steel in Indianapolis, will donate fabrication and the installation of the gate and plaque.

“Just being around Tyler made you feel good about humanity,” Berghoff said. “Instead of you uplifting him during a very difficult time in his life, he uplifted you. I’m just honored to have a way to say ‘thank you.’” 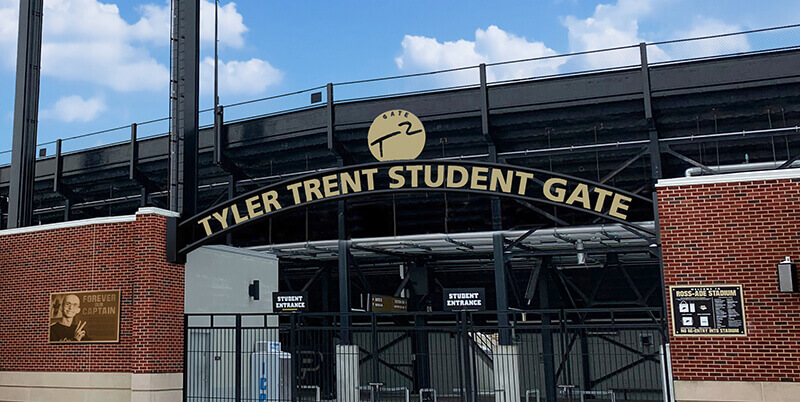 This is an image of the Tyler Trent Memorial Gateway that will be erected at the student-section entrance of Ross-Ade Stadium before the 2019 football season. Download image

Funded through a combination of gifts, the Tyler Trent Courage and Resilience Award is awarded to undergraduate students at Purdue’s West Lafayette campus who have encountered serious physical or similarly daunting adversity in their pursuit of higher education. Students may nominate themselves or be nominated by others. A committee of Honors College students who are also Stamps Scholars (https://honors.purdue.edu/current-students/stamps-scholars/index.php) makes recommendations for the top five nominees; the recipient is chosen by Daniels.

English, who is finishing his first year at Purdue, was a junior at the University of Detroit Jesuit High School in Michigan in 2017 when his life changed dramatically. A multisport athlete, he had been well on his way to a hoped-for track scholarship at Purdue, where his father, Sean Sr., had run track.

On April 2, 2017, while traveling to Sunday Mass, the English family came upon an overturned vehicle on a Detroit freeway. Sean Jr. and his parents got out to help the accident victims. So did another motorist, a pulmonologist at Henry Ford Hospital. Sean Jr. and the doctor were hit by another vehicle (Detroit News story). The doctor died from her injuries. Sean Jr. lost his foot and would later lose his right leg. He would have more than 13 surgeries by his father’s last count, according to the Detroit News. Sean Jr. could not continue to compete in track and field, in high school or at Purdue. Even being able to attend Purdue was at risk. A handwritten letter from Daniels and a face-to-face meeting with Daniels and later with men’s basketball coach Matt Painter, though, cemented Sean’s long-held desire to be a Boilermaker, and he arrived on campus in fall 2018, thanks in part to fundraising efforts by friends and family in Michigan. He will be able to finish his degree thanks to the Trent Scholarship.

“I am a living, walking billboard for (Purdue),” English told the Detroit News.

The Trent Scholarship and Memorial are in honor of Tyler Trent, who was diagnosed with bone cancer at the age of 15 and died at age 20. He founded Teens With a Cause, which recruits young people to perform service projects for families affected by cancer. He went on to earn an associate degree from Purdue in computer information technology. At Purdue he joined the Dance Marathon club, a student organization that raises funds and awareness for Riley Hospital for Children, where he received treatment. He also worked as a sports writer for the Exponent, Purdue’s student newspaper.

As the first student member of the Director’s Advancement Board of the Purdue Center for Cancer Research, Trent helped raise cancer awareness with a younger audience. He was named honorary team captain for Purdue’s Hammer Down Cancer football game, which raises funds for the center.

Throughout his battle with cancer, Trent remained a Boilermaker superfan. He correctly predicted Purdue’s Oct. 20 upset over Ohio State, sending the hashtag #TylerStrong soaring in popularity on social media. He received Disney’s Wide World of Sports Spirit Award in December 2018.

“Tyler’s legacy is all around us,” said Roe Stamps, who contributed to the scholarship and also established, through the Stamps Family Charitable Foundation, Purdue’s Stamps Scholars Program for students who distinguish themselves academically and as leaders in their communities. “I am proud to honor Tyler, and I’m proud that the Stamps Scholars play a role in identifying the scholarship recipients. Through this scholarship, Purdue will be able to assist other students, in Tyler’s name, as they overcome their own obstacles.”

Jeffrey Bundy, who with his wife, Deborah, also provided a donation to found the scholarship, said, “We were inspired by Tyler, throughout his journey and especially by his public testimony of how his Christian faith was the basis of his strength. As longtime friends of the family, we were moved to celebrate Tyler through this scholarship. We are blessed that many people in the future will continue to hear about and benefit from his story.”

Checks may be sent to: Purdue Foundation, 403 West Wood Street, West Lafayette, IN 47907

Online credit card gifts may be made via this link: https://giving.purdue.edu/tylerstrong

For more information on the Tyler Trent Courage and Resilience Award, visit https://www.honors.purdue.edu/current-students/trentaward/index.php

Note to Journalists: Video B-roll is available on Google Drive at https://bit.ly/2TvbZp2