Young, hip farmers: Coming to a city near you 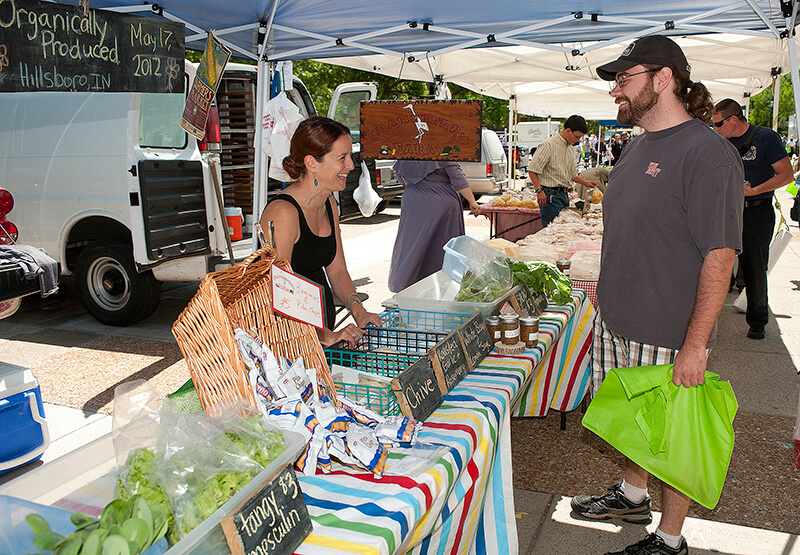 New age farmers are being supported by markets clustered around the West Coast, central Texas and Oklahoma, central Florida and the Great Lakes.

WEST LAFAYETTE, Ind. — If you’ve been to your neighborhood farmers market or seen a small “local” section pop up in your grocery store, you may have noticed a trend: People want to know where their food is coming from, and the agricultural industry is responding. The number of farmers markets in the U.S. has skyrocketed in recent years, but with an aging population of farmers, who’s supporting this growth?

Enter the new American farmer. It’s a term used by Andrew Flachs, an environmental anthropologist at Purdue University, to describe a movement of younger people new to agricultural work who do it for different reasons than the conventional farmer. They may be motivated through higher education, personal politics, disenchantment with urban life or in search of an authentic rural identity, he says.

In a new paper in the journal Rural Sociology, Flachs identifies several hot spots where this movement is really taking shape: the West Coast, central Texas and Oklahoma, central Florida and the Great Lakes region.

“We’re seeing these hot spots pop up in the peripheries of hip cities,” Flachs said. “Some of these places might seem obvious, like the West Coast and the northern Midwest around Madison, the Twin Cities and Chicago. But we also see some things that aren’t totally expected.”

Among the unexpected trends he found, east Texas and the southern Midwest are becoming increasingly important for this kind of agriculture. Appalachia, which has historically been a hub, essentially disappeared from the map.

In collaboration with Matthew Abel, an anthropologist at Washington University in St. Louis, Flachs built a model that counts how many traits associated with new American agrarianism appear in each county. With data from the USDA agricultural censuses from 1997 to 2012, they considered factors such as average sales per farm, number of certified organic farms, owners under age 34, number of farms selling directly to individuals, proximity to farmers markets and more.

The findings show that newer farmers appear to thrive on the outskirts of cities that provide high demand and purchasing power, a large population and a healthy number of farmers markets.

The price of real estate is another important factor in determining where these markets can flourish. Rural developers have steadily increased farm real estate over the last few decades, which could deter newer farmers from settling down there. Concentrations of urban wealth drive up real estate costs in the city while simultaneously creating new niche markets, making space for younger farmers to exist between urban and rural landscapes.

Identifying where new and small farmers live and work will pave the way for further research on what’s motivating this budding sector of the agricultural economy. New American farmers occupy an important intersection of niche marketing strategies, environmental politics and rural demographic change that could have a significant impact on food production and social life in agrarian landscapes, according to the paper.

Flachs points out that many new American farmers approach agriculture with hopes to embody a nostalgic past where food and environments were healthier, but others may be simply trying to make a living as farmers amid dissatisfaction with conventional agribusiness. Although it’s easy to stereotype, it’s unlikely that all new American farmers fit this description.

“Sometimes when we think about these farmers, we picture young people with liberal arts degrees looking for some kind of connection to the earth or wanting to work with their hands,” Flachs said. “What we found is that that’s probably not the most representative view of who these people actually are. I’m glad to have my stereotype broken up by the data.”

The research was funded by Purdue, Washington University in St. Louis and the Volkswagen Foundation.

An Emerging Geography of the Agrarian Question: Spatial Analysis as a Tool for Identifying the New American Agrarianism

Karl Kautsky’s Agrarian Question remains a useful lens for analyz- ing the relationship between small and large agricultural producers under the conditions of industrial capitalism. The U.S. agricultural census provides an opportunity to identify socioeconomic, demographic, and agricultural fac- tors associated with new and alternative farming at the county level, and then analyze these for spatial patterns within a geographic information system. By associating these county-level indicators with a crowd-sourced USDA direc- tory of farmers’ markets as a proxy for local demand, we identified four hot spots of new American agriculture: The West Coast, central Texas and Oklahoma, central Florida, and the Great Lakes region. Furthermore, we show that these areas have been growing since 1997. An additional farmer hot spot in central Appalachia diminished after 1997 and finally disappeared in 2012. We argue that spatial analysis is a tool for defining new agrarian land- scapes, observing geographic and social shifts in small, alternative farming, and conducting more focused ethnographic research.