Who takes care of the police officers dealing with child pornography, cyberdeviance? A Purdue professor is reaching out 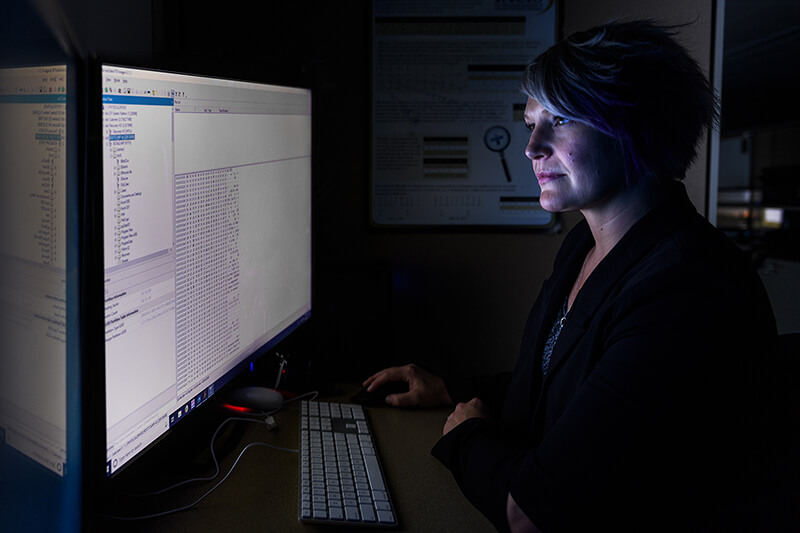 Kathryn Seigfried-Spellar, an assistant professor in the Purdue Polytechnic Institute’s Department of Computer and Information Technology, works on a computer in the Tippecanoe County High Tech Crime Unit in Discovery Park. (Photo/Rebecca Wilcox)

WEST LAFAYETTE, Ind. — Children are victimized every day in child pornography cases, but hidden behind the societal outcry to protect them are the law enforcement investigators forced to shuffle through sometimes thousands of illegal images.

Kathryn Seigfried-Spellar, however, won’t let those enforcement officials be forgotten.

“They are what really move me in my career,” she said.

Seigfried-Spellar, an assistant professor in Purdue Polytechnic Institute’s Department of Computer and Information Technology, researches how examiners who have to see thousands of child pornography images every day deal with that kind of job. She looks at the resulting problems, ranging from stress and depression, to secondary traumatic stress disorder and suicidal thoughts.

The work aligns with Purdue's Giant Leaps celebration, acknowledging the university’s global advancements made in AI, algorithms and automation: Balancing humanity and technology as part of Purdue’s 150th anniversary. This is one of the four themes of the yearlong celebration’s Ideas Festival, designed to showcase Purdue as an intellectual center solving real-world issues. 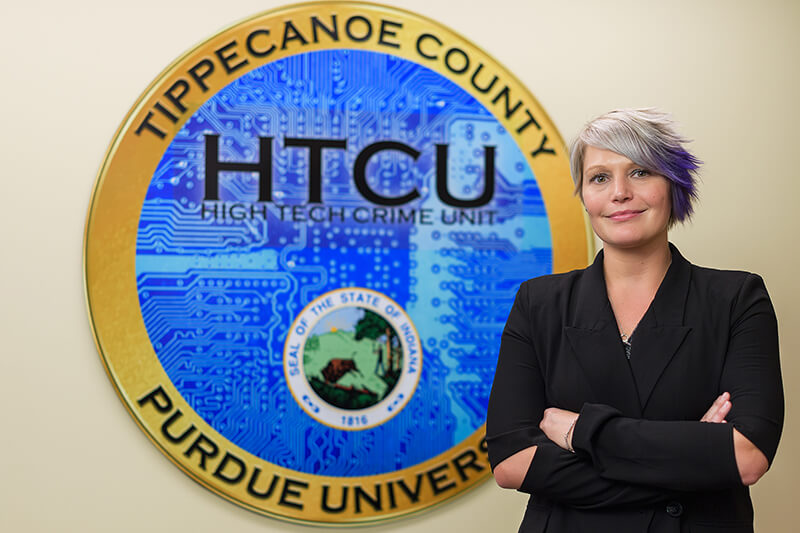 “I’ve heard people – specifically within the law enforcement community - say, ‘What do they expect, they’re officers; they’re supposed to handle anything,’” she said. “But some of them are seeing thousands of images, and nothing can prepare you for that.”

“Every single day for five years, 10 years — people don’t realize that’s a lot, and no one wants to sign up for that. Law enforcement should not be expected to ‘just handle it.’”

As part of the cybersecurity program, Seigfried-Spellar teaches students who are studying to become cybersecurity analysts. Part of their jobs for companies such as Microsoft or Google could be to monitor online activity, including child pornography.

“It’s traumatic, especially if you’re not ready,” she said. “As much as they talk about what the images are and the types of images that exist, seeing it is completely different than describing it.”

It was as an intern for the Indianapolis Metropolitan Police Department that Seigfried-Spellar discovered her career path. The continuous flow of child pornography cases piqued her interest, prompting her to switch from her initial thought of studying serial killers and rapists as part of the FBI.

Her field of research now includes studying the personality characteristics and socio-legal factors associated with cyberdeviance, such as Internet child pornography use, hacking, cyberbullying, trolling and cyber threats via social media.

She maintains her law-enforcement connections through work with the Tippecanoe High Tech Crime Unit, located in Discovery Park on the Purdue campus, and through her research, including an ongoing joint project to develop new tools and technologies to help police analyze chats more quickly and identify the child sex offenders more likely to set up a meeting with a victim.

Her work in helping police handle the influx of child pornography cases, however, remains one of her biggest priorities.

Many of the digital forensic examiners are afraid they’re going to be found unfit for duty because they are getting counseling for the stress that working with child pornography cases puts on them, Seigfried-Spellar said. Chiefs need to know how to protect their officers, and digital forensic examiners need to have access to mental health services without the fear of stigma.

“I have had emails from officers saying they were that person who was going to commit suicide but they got help,” she said. “Or someone emails me saying they, unfortunately, lost an officer who committed suicide, and they’re so glad someone is recognizing these issues.

“That’s the whole point: Just knowing that even if there’s only a few people that read one of my studies, it tells them they’re not alone.”

Note to Journalists: Broadcast-quality B-roll of Seigfried-Spellar is available at http://bit.ly/2xnWHKs.