Martin Low (left) and Philip Low are brothers and co-founders of On Target Laboratories, a privately held biotechnology company that is developing drugs that help surgeons to more easily identify cancerous cells and other diseased tissue to improve long-term outcomes for patients. They are both serial entrepreneurs. Philip Low, the Purdue University Presidential Scholar in Drug Discovery and the Ralph C. Corley Distinguished Professor of Chemistry, has started four companies. Martin Low, CEO of On Target Laboratories, previously co-founded seven companies. In a podcast they offer practical advice for university researchers who want to move their innovations to applied research through a startup. (Purdue Research Foundation image/Oren Darling)

WEST LAFAYETTE, Ind. – Practical advice for university researchers who want to move their innovations to applied research through a startup is available from a Purdue University distinguished professor and his brother, a successful serial entrepreneur and business partner. The help is posted on a Pharmaceutical Executive magazine podcast.

“Scientists and researchers looking to commercialize their innovations should be their own worst critics,” said Philip Low, the Purdue University Presidential Scholar in Drug Discovery and the Ralph C. Corley Distinguished Professor of Chemistry, who co-founded a pharmaceutical company, Endocyte, which recently sold for $2.1 billion. “Our goal in contributing to this podcast is to encourage and provide guidance to other researchers with a desire to move their technologies to the public by founding their own startups.”

Low and his brother Martin Low co-founded On Target Laboratories, a privately held biotechnology company that is developing drugs that help surgeons to more easily identify cancerous cells and other diseased tissue to improve long-term outcomes for patients. Both are serial entrepreneurs and said during the 28-minute podcast that their past experiences were invaluable.

In addition to co-founding On Target Laboratories and Endocyte, which Novartis AG recently acquired, Philip Low also co-founded Novosteo Inc., which is developing and commercializing an innovative new targeted drug to assist in the acceleration of healing bone fractures, and HuLow LLC, which seeks to invest in early-stage, life-changing medical products. Philip Low told listeners to the podcast that those considering the creation of a startup for their technology should thoroughly scrutinize their innovations. If they still firmly believe they can succeed, they should stick with it.

“Don’t lose hope,” he said. “Marty and I can both attest that the road forward has never been smooth or easy with any of the four companies I’ve started. There’s been just many, many ups and downs and I think it’s smart not to get too far down when you run into roadblocks and not too high when things appear to be destined to succeed. Because the landscape will change very quickly regardless of where you are right now.”

Martin Low, On Target’s chief operating officer, who previously co-founded seven companies in insurance, renewable energy, consulting, retail and health care, was able to bring his entrepreneurial and business vision to partner with his brother and commercialize his research.

“I think the benefit coming from the outside in any industry is that you’ve got a whole new perspective. You look at problems differently. You ask the questions, ‘why’ and ‘why not?’” Martin Low told the podcast host.

His diverse entrepreneurial experience taught him that there are a lot of similarities between industries even though everyone thinks that their industry is unique and is “the most difficult to crack.”

The brothers also said during the podcast that is important to have a deep understanding of the challenges associated with commercializing research, for example, finding funding and recruiting potential patients into clinical studies. Additionally, finding good leadership is essential to help guide the business aspect in the research and assist in the commercialization process.

Philip Low started linking cancer homing molecules to bright fluorescent dyes in 2000 but despite speaking at nearly 100 universities and medical schools about the potential of this technology, he found little enthusiasm from others for this research until nine years later when Gooitzen van Dam, a professor and surgeon at the University of Groningen in the Netherlands, expressed interest.

“I think most of the people that I tried to interest in using our tumor-targeted dyes to locate cancer tissue during surgery had difficulty envisioning what they had never personally experienced,” Philip Low said. “I think that’s not uncommon among our colleagues and friends today because it’s often hard to perceive what you can’t see.”

Their image-guided surgery aligns with Purdue's Giant Leaps celebration of the university’s global advancements made in health, space, artificial intelligence and sustainability as part of Purdue’s 150th anniversary. Those are the four themes of the yearlong celebration’s Ideas Festival, designed to showcase Purdue as an intellectual center solving real-world issues.

A video about their image guided surgery is available here. 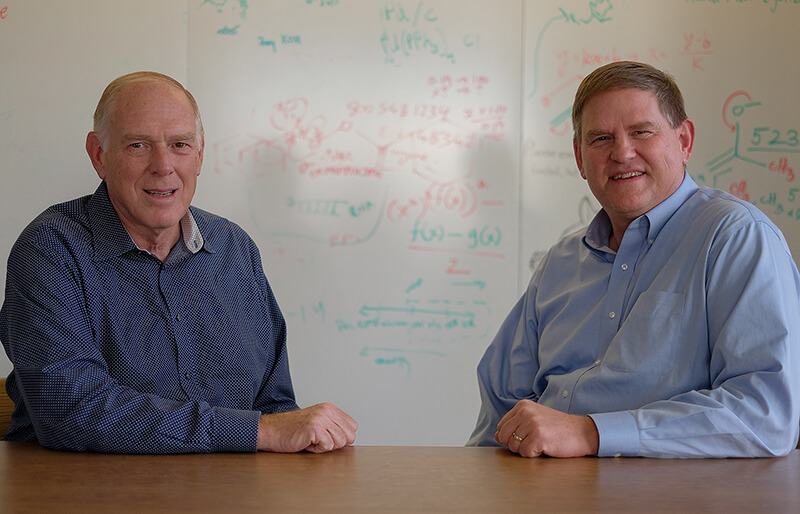 Philip Low said researchers need to seriously reflect on how likely they are to succeed.

“Be very thorough in evaluating the likelihood of success in humans, the scientific impediments, the regulatory pitfalls, the financial minefields that lie between the laboratory and the human clinical testing,” he said. “Make sure that you really understand what they are, the problems with raising money, the difficulties associated with recruiting patients to try a new technology that isn’t guaranteed to help them.”

The brothers say it isn’t difficult to work together as siblings because they respect each other and have the same goal of helping cure people with cancer.

“You understand that the outcome is really the most important deliverable out of this whole interaction. You don’t want to sacrifice the outcome for minor differences that arise along the way,” Philip Low said.

On Target Laboratories is based in the Purdue Research Park.

Purdue’s Office of Technology Commercialization runs one of the most comprehensive technology transfer programs among leading research universities. OTC has more than 400 innovations available for licensing and commercialization.

“Purdue has a robust pipeline of innovations that are making the world a better place. Those innovations also have shown their value in the marketplace,” said Brooke Beier, OTC vice president. “Purdue has many more technologies available for licensing and the Office of Technology Commercialization is ready and waiting for companies or entrepreneurs to commercialize them.”