Structures of spherical viruses aren’t as perfect as we thought 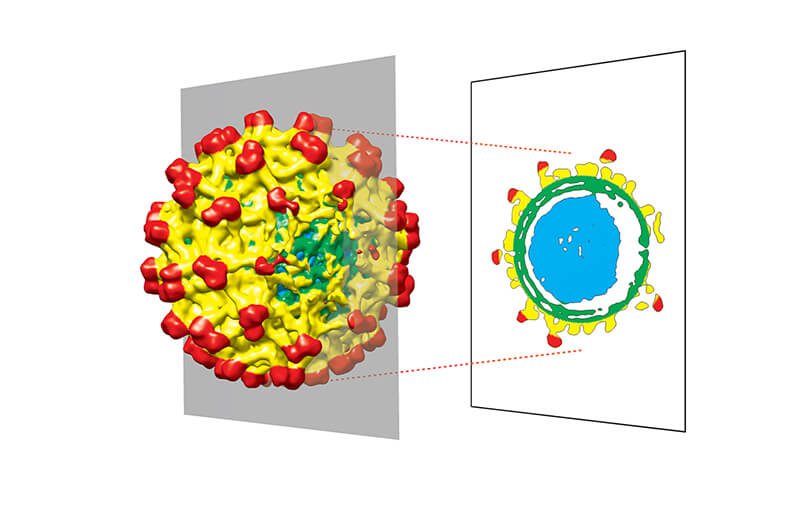 Icosahedral viruses were always assumed to be perfectly symmetrical, but new reconstructions show they have some abnormalities. (Purdue University photo) Download image

WEST LAFAYETTE, Ind. — Determining the structure of a virus is an important step in understanding and treating viral disease. For decades, structural biologists have been using cryo-electron microscopy to create increasingly accurate pictures of biomolecules, but one of the assumptions they’ve been relying on could be wrong.

Flaviviruses, such as dengue and Zika, were assumed to be symmetrical icosahedrons (shapes with 20 identical faces) based on data from microscopes. But these icosahedral viruses might not be perfectly symmetrical after all, according to a new study in the journal Proceedings of the National Academy of Sciences.

“Up until now, any such viruses that have ever been examined have been looked at with the assumption that they had icosahedral symmetry,” said Michael Rossmann, the Hanley Distinguished Professor of Biological Sciences at Purdue University. “Now we realize that’s an approximation – it’s not completely accurate. A large proportion of viruses are nearly icosahedral, and just now we’re beginning to see the details.”

The research team, including Richard Kuhn, the Trent and Judith Anderson Distinguished Professor of Science at Purdue, used cryo-EM to determine the structures of immature and mature Kunjin virus, a strain of West Nile virus. They followed standard procedures until the end, when data from the microscope is processed to generate a structure. Where they would normally apply a symmetry requirement, the researchers opted out. 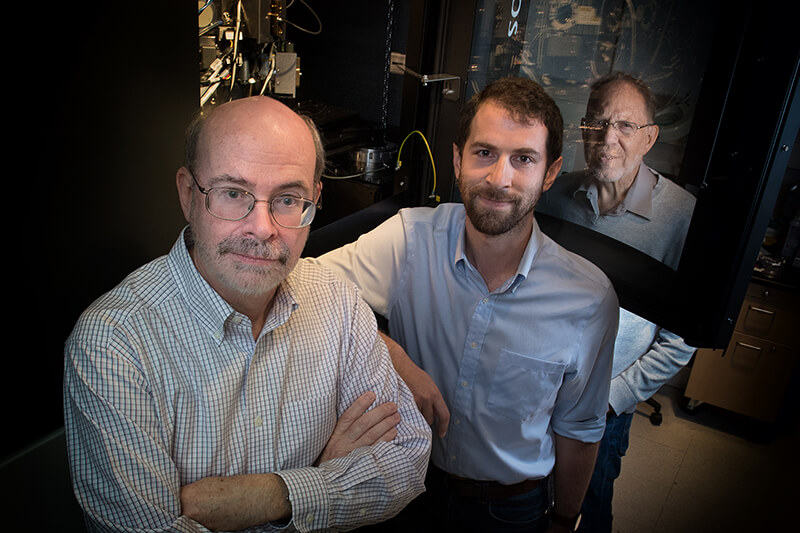 Matthew Therkelsen, a graduate researcher at Purdue and lead author of the paper, first noticed something unusual when he was determining the structure of an antibody bound to the immature virus. Images of the antibody bound to the virus showed a preference for one side of the particle, and that side was a little fuzzy.

“The fact that the antibody seemed to prefer one side of the particle, and that side had an unusual density, made me question the assumptions we’d been making about icosahedral symmetry,” Therkelsen said. “After that, I started doing asymmetrical reconstructions.”

What he found looked sort of like a “belly button” on the exterior of the virus.

This deviation in symmetry could come from the way the virus is produced. When enveloped viruses are assembling new virus particles, they burrow into a cellular membrane and push until they’ve created their own protective layer. When this layer is almost fully enclosed, the virus gives one final nudge and buds from the membrane.

The researchers think it’s at this point, where the new virus membrane is attempting to close, that the virus’ previously perfect structure gets a little distorted.

“The neck of this budding particle gets very narrow as it pinches off, and the glycoproteins surrounding the shell begin hitting one another,” said Kuhn. “We think they might not grab the right number of proteins to make an icosahedron, and the result is a particle that has a distortion on one side.”

Some other viruses have uniquely positioned cores, but the flavivirus core is unique because it repositions as the virus becomes an “adult.” Maturation is an important part of the viral life cycle, and these findings could provide insight into what’s going on during this process and why.

The researchers believe these findings will open the door to future experiments. In addition to the true structures of several, if not all, icosahedral viruses, there are many other unknowns. Does the unique pole of the virus have a function when it binds to the next cell? Does it facilitate binding to the receptor? Does it influence the exit of the RNA on the inside? These details are all important to understanding the life cycle of flaviviruses.

This research was supported by grants from the National Institutes of Health.

Flaviviruses assemble initially in an immature, non-infectious state and undergo extensive conformational rearrangements to generate mature virus. Previous cryo-electron microscopy (cryo-EM) structural studies of flaviviruses assumed icosahedral symmetry and showed the concentric organization of the external glycoprotein shell, the lipid membrane and the internal nucleocapsid core. We show here that when icosahedral symmetry constraints were excluded in calculating the cryo-EM reconstruction of an immature flavivirus, the nucleocapsid core was positioned asymmetrically with respect to the glycoprotein shell. The core was positioned closer to the lipid membrane at the “proximal pole”, and at the “distal pole”, the outer glycoprotein spikes and inner membrane leaflet were either perturbed or missing. In contrast, in the asymmetric reconstruction of a mature flavivirus, the core was positioned concentric with the glycoprotein shell. The deviations from icosahedral symmetry demonstrated that the core and glycoproteins have varied interactions, which likely promotes viral assembly and budding.