Purdue’s Garimella gets U.S. presidential nod for National Science Board

WEST LAFAYETTE, Ind. — Suresh V. Garimella, who has led four straight record years for Purdue University research funding, will be appointed to the National Science Board.

Garimella, Purdue’s executive vice president for research and partnerships and the Goodson Distinguished Professor of Mechanical Engineering, is one of seven appointments to the board by President Donald Trump. Members are selected for their eminence in research, education and records of distinguished service and are appointed by the U.S. president.

“I am humbled and honored,” said Garimella, who was nominated by Purdue President Mitch Daniels and received unanimous support from all 11 of Indiana’s national legislators. “The NSF is a key driver of American research and tech innovation. I believe that this appointment is a recognition of Purdue’s leadership in science and engineering over its 150 years and in emerging technologies such as artificial intelligence and quantum computing.” (Garimella discusses the appointment.) 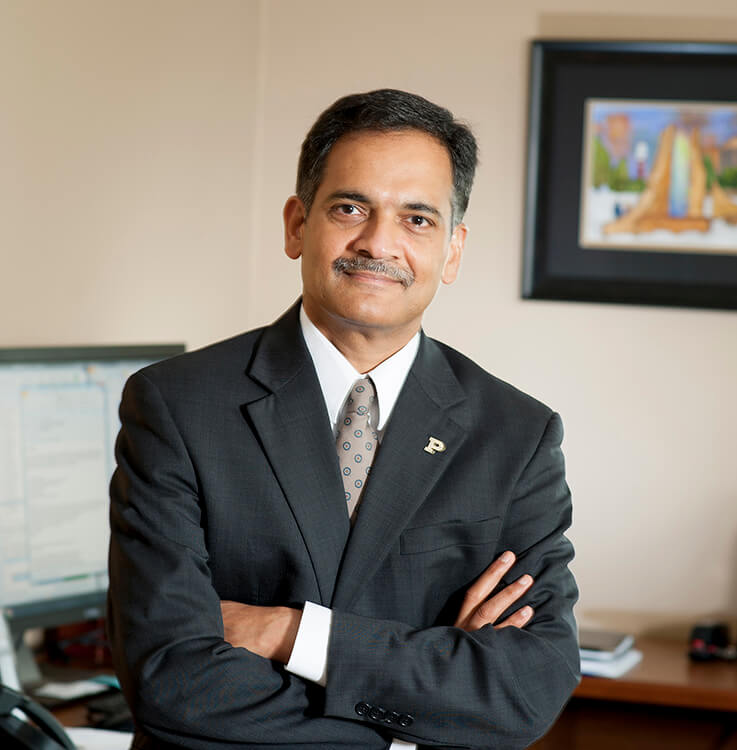 The National Science Board, created through the National Science Foundation Act of 1950, oversees the activities of, and establishes policies for, the NSF. The board acts as an independent body of advisers to both the president and Congress on policy matters related to science, engineering and educating the next generation of scientists. Its members also approve major NSF awards, provide congressional testimony and issue statements relevant to the nation’s science and engineering enterprise.

At Purdue, Garimella is in charge of the university’s diverse research enterprise, which expends well over $660 million annually to support world-changing research. He is cited for his strength in innovation, competitiveness and leveraging investments via academic-corporate partnerships.

Under his leadership, Purdue is on a streak of record research funding. The university generated a record $454.5 million in sponsored research funding in fiscal year 2018, $36 million more than in 2017, itself a record year. The NSF accounted for 15 percent of the 2018 funding.

This year, Purdue is celebrating 150 years of world-changing research and development accomplishments. The Giant Leaps Sesquicentennial Campaign is centered on Purdue’s Ideas Festival, a series of events that connect world-renowned speakers and Purdue expertise in a conversation on the most critical problems facing the world.

“You could say that Purdue’s legacy as a ‘cradle of astronauts’ also extends to our university’s service to the nation in science and engineering,” Daniels said. “Purdue faculty and alumni have been selected to fulfill important roles in advancing the nation’s research enterprise since the beginning of the NSF. Dr. Garimella’s distinguished record of success as a leading scholar and educator and in advancing Purdue’s research enterprise makes him especially qualified to serve on this prestigious board.”

In 2010, the U.S. Department of State appointed Garimella as a Jefferson Science Fellow to help with engaging the American academic science, technology and engineering communities in the formulation and implementation of U.S. foreign policy. Related to his role as a Jefferson Science Fellow, Garimella was a State Department delegate to the Committee on Energy Research & Technology of the International Energy Agency and a member of the U.S.-Russia Bilateral Presidential Commission Science & Technology working group. He was also a senior fellow in the State Department’s Energy and Climate Partnership of the Americas.

• Michael G. Rossmann, the Hanley Distinguished Professor of Biological Sciences, was on the board between 2000-06.

• Kent Fuchs, a former department head of electrical and computer engineering, is a current member of the board.

• Richard A. Buckius, former Purdue vice president for research and professor of mechanical engineering served the NSF in various capacities, beginning as program director of the Thermal Systems and Engineering Program in 1987, and ultimately as the NSF chief operating officer until 2017.

• Leah H. Jamieson, the John A. Edwardson Dean Emerita of Engineering is an NSF advisory committee member in engineering, and Richard J. Kuhn, the Trent and Judith Anderson Distinguished Professor in Science and the Krenicki Family Director for the Purdue Institute of Inflammation, Immunology and Infectious Disease is a member of the advisory committee for biological sciences.