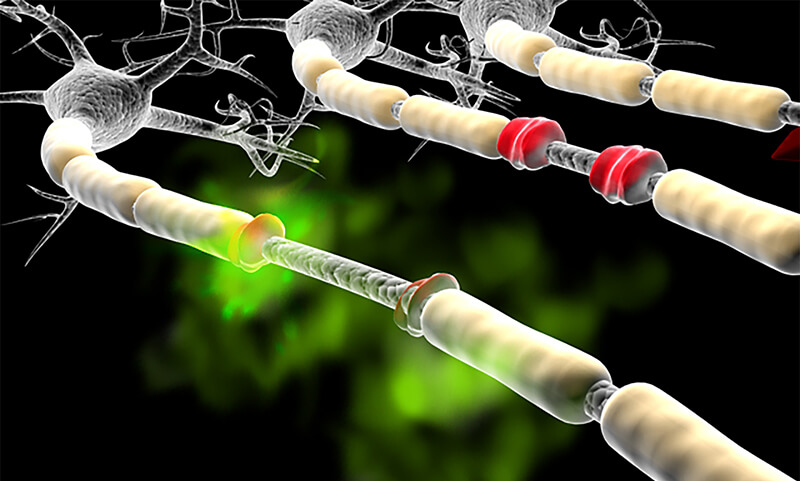 A biomarker for multiple sclerosis has been identified in humans by researchers at Purdue University and the Indiana University School of Medicine. Although just in preliminary testing, initial tests in humans have found that the substance acrolein — a waste product normally excreted by the body ( shown here in green) can accumulate in some people and cause neurological problems by damaging the myelin (damaged myelin shown in red), which surrounds the nerve cell like insulation on a copper wire. (Purdue University photo/Michel J Schweinsberg)

WEST LAFAYETTE, Ind. — A biomarker for multiple sclerosis that could be an early warning for the disease has shown promise in both human and animal testing.

Researchers at Purdue University and the Indiana University School of Medicine found that acrolein, a molecule previously suspected as a metabolic waste product that accumulates in people with certain neurological disorders such as multiple sclerosis and Parkinson's disease, could possibly be used to help diagnose MS.

Multiple sclerosis affects an estimated 2.3 million people worldwide, according to the National Multiple Sclerosis Society, and an estimated 1 million people in the United States have MS.  The disease usually is diagnosed between the ages of 20 and 50, and affects twice as many women as men.

Although there is no cure for MS, recent years have seen a flurry of activity around possible biomarkers and possible treatments.

A new urine test for multiple sclerosis could identify the disease much earlier and allow easy monitoring of treatments. @PurdueUnivNews

Dr. David Mattson, professor of neurology and the director of the Indiana University Multiple Sclerosis Center, says that if the results are validated, acrolein could also allow medical professionals to monitor the effectiveness of treatments.

"We are in the process of trying to correlate acrolein levels with MS disease activity, which potentially would help us monitor disease activity with a blood test," he says. "If this is validated, it would help us decide how aggressive to be with immunotherapy, or whether a therapy is working or there is a need to switch to a different therapy."

Acrolein is a byproduct of fat metabolism. Dr. Riyi Shi, a professor of neuroscience and biomedical engineering in Purdue University's Department of Basic Medical Sciences, College of Veterinary Medicine and Weldon School of Biomedical Engineering, has found that an accumulation of the molecule is present in animal models of neurological diseases such as MS, Parkinson's disease, or even spinal cord and brain injuries. Acrolein is thought to damage cells by disrupting the lipids, or fats, that protect nerve tissue, in a process called lipid peroxidation. Shi said that both blood and urine tests, or assays, have been able to measure acrolein levels in humans and in animal models.

According to Shi, it is, therefore, possible that a high level of acrolein is indicative of more active MS, though low levels of acrolein do not rule out the possibility of having MS.  Further study is needed to vailidate these initital observations.

Shi says the study also suggests that acrolein is not just a potential biomarker of MS disease activity but could also be a target for therapies.

"There are drugs already on the market that are known to be acrolein scavengers, and it is possible that one of these drugs could be repurposed as a possible therapy for MS," Shi says. "But these drugs also have strong effects on other targets, so more study would need to be done to see if they have a therapeutic effect to eliminate acrolein at a safe level."

The two drugs in this catogory are hydralazine, used to treat high blood pressure and heart failure, and phenelzine, which is used to treat major depression.

"Before attempting to repurpose these drugs to lower acrolein in MS patients, we plan to first confirm if acrolein, indeed, correlates with disease activity in MS through a larger clinical study with more participants,”  Mattson says. “Then we need to show that these drugs can, indeed, reduce acrolein levels in human MS patients, and if lowering acrolein levels is therapeutic in MS.

“If it turns out these agents can reduce acrolein levels in MS and offer benefit for the disease process in MS, then patients on these agents for the blood pressure or psychiatric indications would get two benefits for one.”

Shi's health research aligns with Purdue's Giant Leaps celebration, which acknowledges the university's global advancements in health, longevity and quality of life as part of Purdue's 150th anniversary. This is one of the four themes of the yearlong celebration's Ideas Festival, designed to showcase Purdue as an intellectual center solving real-world problems.

This work was supported by an Indiana Clinical and Translational Sciences Institute pilot program grant RR025761, the Indiana State Department of Health grant 204200, and the National Institutes of Health grant NS073636.

Shi also is the co-founder of Neuro Vigor, a startup company with business interests of developing effective therapies for CNS neurodegenerative diseases and trauma. Previously, Shi was one of three scientists who developed Ampyra, the first and only FDA-approved drug to help multiple sclerosis patients improve their motor skills. Mattson is on the Neuro Vigor advisory board.

Demyelination and axonal injury are the key pathological processes in multiple sclerosis (MS), driven by inflammation and oxidative stress. Acrolein, a byproduct and instigator of oxidative stress, has been demonstrated as a neurotoxin in experimental autoimmune encephalomyelitis (EAE), an animal model of MS. However, due to the invasive nature of acrolein detection using immunoblotting techniques, the investigation of acrolein in MS has been limited to animal models. Recently, detection of a specific acrolein-glutathione metabolite, 3-HPMA, has been demonstrated in urine, enabling the noninvasive quantification of acrolein for the first time in humans with neurological disorders. In this study, we have demonstrated similar elevated levels of acrolein in both urine (3-HPMA) and in spinal cord tissue (acrolein-lysine adduct) in mice with EAE, which can be reduced through systemic application of acrolein scavenger hydralazine. Furthermore, using this approach we have demonstrated an increase of 3-HPMA in both the urine and serum of MS patients relative to controls. It is expected that this noninvasive acrolein detection could facilitate the investigation of the role of acrolein in the pathology of MS in human. It may also be used to monitor putative therapies aimed at suppressing acrolein levels, reducing severity of symptoms, and slowing progression as previously demonstrated in animal studies.