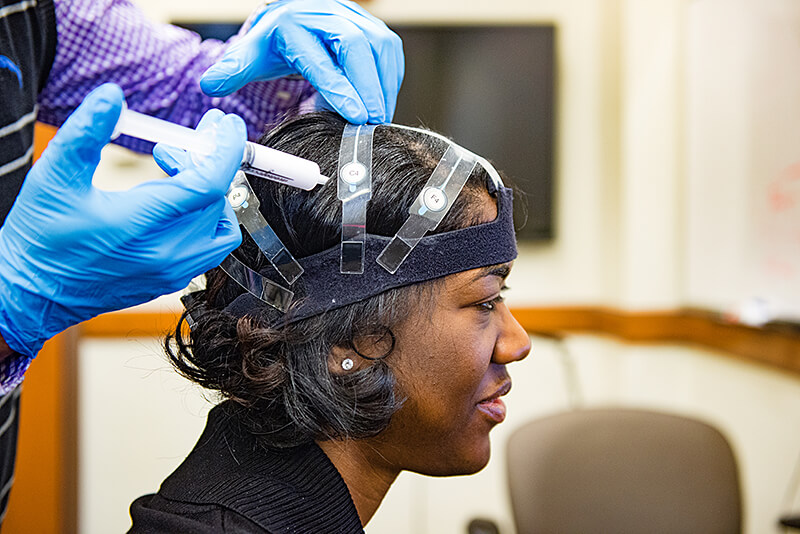 How should intelligent machines be designed so as to “earn” the trust of humans? New models are informing these designs. (Purdue University photo/Marshall Farthing)

WEST LAFAYETTE, Ind. – New “classification models” sense how well humans trust intelligent machines they collaborate with, a step toward improving the quality of interactions and teamwork.

The long-term goal of the overall field of research is to design intelligent machines capable of changing their behavior to enhance human trust in them. The new models were developed in research led by assistant professor Neera Jain and associate professor Tahira Reid, in Purdue University’s School of Mechanical Engineering.

For example, aircraft pilots and industrial workers routinely interact with automated systems. Humans will sometimes override these intelligent machines unnecessarily if they think the system is faltering.

“It is well established that human trust is central to successful interactions between humans and machines,” Reid said.

The researchers have developed two types of “classifier-based empirical trust sensor models,” a step toward improving trust between humans and intelligent machines. A YouTube video is available at https://www.youtube.com/watch?v=Mucl6pAgEQg.

The work aligns with Purdue's Giant Leaps celebration, acknowledging the university’s global advancements made in AI, algorithms and automation as part of Purdue’s 150th anniversary. This is one of the four themes of the yearlong celebration’s Ideas Festival, designed to showcase Purdue as an intellectual center solving real-world issues.

The models use two techniques that provide data to gauge trust: electroencephalography and galvanic skin response. The first records brainwave patterns, and the second monitors changes in the electrical characteristics of the skin, providing psychophysiological “feature sets” correlated with trust.

One of the new models, a “general trust sensor model,” uses the same set of psychophysiological features for all 45 participants. The other model is customized for each human subject, resulting in improved mean accuracy but at the expense of an increase in training time. The two models had a mean accuracy of 71.22 percent, and 78.55 percent, respectively. 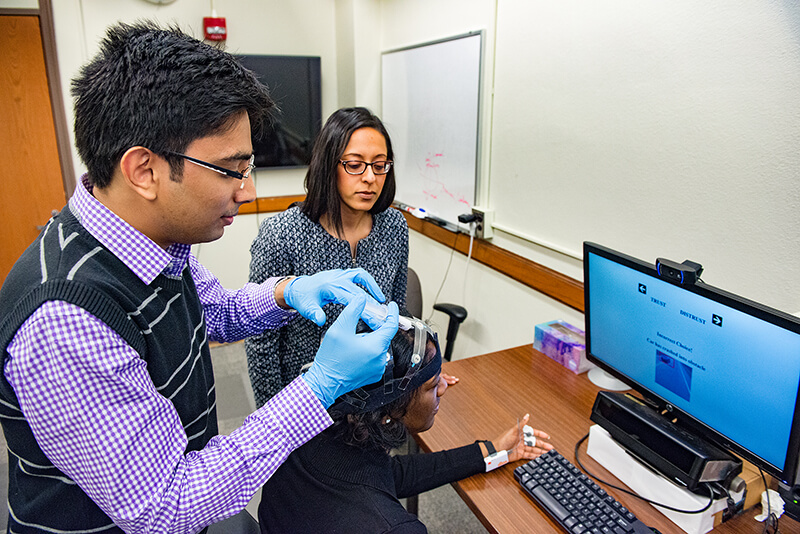 It is the first time EEG measurements have been used to gauge trust in real time, or without delay.

“We are using these data in a very new way,” Jain said. “We are looking at it in sort of a continuous stream as opposed to looking at brain waves after a specific trigger or event.”

Findings are detailed in a research paper appearing in a special issue of the Association for Computing Machinery’s Transactions on Interactive Intelligent Systems. The journal’s special issue is titled "Trust and Influence in Intelligent Human-Machine Interaction."  The paper was authored by mechanical engineering graduate student Kumar Akash; former graduate student Wan-Lin Hu, who is now a postdoctoral research associate at Stanford University; Jain and Reid.

“We are interested in using feedback-control principles to design machines that are capable of responding to changes in human trust level in real time to build and manage trust in the human-machine relationship,” Jain said. “In order to do this, we require a sensor for estimating human trust level, again in real-time. The results presented in this paper show that psychophysiological measurements could be used to do this.”

The issue of human trust in machines is important for the efficient operation of “human-agent collectives.”

“The future will be built around human-agent collectives that will require efficient and successful coordination and collaboration between humans and machines,” Jain said. “Say there is a swarm of robots assisting a rescue team during a natural disaster. In our work we are dealing with just one human and one machine, but ultimately we hope to scale up to teams of humans and machines.”

Algorithms have been introduced to automate various processes.

“But we still have humans there who monitor what’s going on,” Jain said. “There is usually an override feature, where if they think something isn’t right they can take back control.”

“You have situations in which humans may not understand what is happening so they don’t trust the system to do the right thing,” Reid said. “So they take back control even when they really shouldn’t.”

In some cases, for example in the case of pilots overriding the autopilot, taking back control might actually hinder safe operation of the aircraft, causing accidents.

“A first step toward designing intelligent machines that are capable of building and maintaining trust with humans is the design of a sensor that will enable machines to estimate human trust level in real time,” Jain said.

The testing allowed the researchers to identify psychophysiological features that are correlated to human trust in intelligent systems, and to build a trust sensor model accordingly. “We hypothesized that the trust level would be high in reliable trials and be low in faulty trials, and we validated this hypothesis using responses collected from 581 online participants,” she said.

The results validated that the method effectively induced trust and distrust in the intelligent machine.

The EEG headset records signals over nine channels, each channel picking up different parts of the brain.

“Everyone’s brainwaves are different, so you need to make sure you are building a classifier that works for all humans.”

For autonomous systems, human trust can be classified into three categories: dispositional, situational, and learned.

Dispositional trust refers to the component of trust that is dependent on demographics such as gender and culture, which carry potential biases.

“We know there are probably nuanced differences that should be taken into consideration,” Reid said. “Women trust differently than men, for example, and trust also may be affected by differences in age and nationality.”

Situational trust may be affected by a task’s level of risk or difficulty, while learned is based on the human’s past experience with autonomous systems.

The models they developed are called classification algorithms.

Jain and Reid have also investigated dispositional trust to account for gender and cultural differences, as well as dynamic models able to predict how trust will change in the future based on the data.

The research is funded by the National Science Foundation. The researchers have published several papers since the work began in 2015.

Note to Journalists: For a full-text copy of the paper, please contact Kayla Wiles, Purdue News Service, at wiles5@purdue.edu. A YouTube video is available at https://www.youtube.com/watch?v=Mucl6pAgEQg. The video was prepared by Jared Pike, communications specialist in Purdue’s School of Mechanical Engineering, jaredpike@purdue.edu.

Today, intelligent machines interact and collaborate with humans in a way that demands a greater level of trust between human and machine. A first step towards building intelligent machines that are capable of building and maintaining trust with humans is the design of a sensor that will enable machines to estimate human trust level in real-time. In this paper, two approaches for developing classifier-based empirical trust sensor models are presented that specifically use electroencephalography (EEG) and galvanic skin response (GSR) measurements. Human subject data collected from 45 participants is used for feature extraction, feature selection, classifier training, and model validation. The first approach considers a general set of psychophysiological features across all participants as the input variables and trains a classifier-based model for each participant, resulting in a trust sensor model based on the general feature set (i.e., a "general trust sensor model"). The second approach considers a customized feature set for each individual and trains a classifier-based model using that feature set, resulting in improved mean accuracy but at the expense of an increase in training time. This work represents the first use of real-time psychophysiological measurements for the development of a human trust sensor. Implications of the work, in the context of trust management algorithm design for intelligent machines, are also discussed.