WEST LAFAYETTE, Ind. — Solar power accounts for less than 2 percent of U.S. electricity but could make up more than that if the cost of electricity generation and energy storage for use on cloudy days and at nighttime were cheaper.

A Purdue University-led team developed a new material and manufacturing process that would make one way to use solar power – as heat energy – more efficient in generating electricity.

The innovation is an important step for putting solar heat-to-electricity generation in direct cost competition with fossil fuels, which generate more than 60 percent of electricity in the U.S.

“Storing solar energy as heat can already be cheaper than storing energy via batteries, so the next step is reducing the cost of generating electricity from the sun's heat with the added benefit of zero greenhouse gas emissions,” said Kenneth Sandhage, Purdue’s Reilly Professor of Materials Engineering.

The research, which was done at Purdue in collaboration with the Georgia Institute of Technology, the University of Wisconsin-Madison and Oak Ridge National Laboratory, published in the journal Nature. A YouTube video is available at https://youtu.be/PMC3EE19ouw. 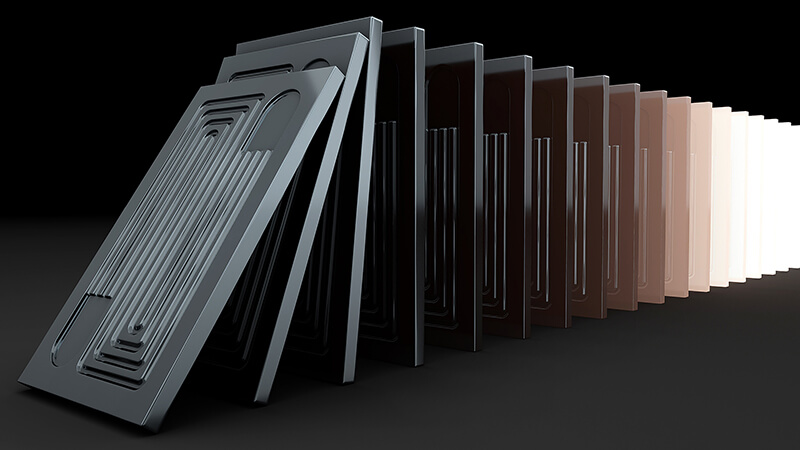 This work aligns with Purdue's Giant Leaps celebration, acknowledging the university’s global advancements made for a sustainable economy and planet as part of Purdue’s 150th anniversary. This is one of the four themes of the yearlong celebration’s Ideas Festival, designed to showcase Purdue as an intellectual center solving real-world issues.

Solar power doesn't only generate electricity via panels in farms or on rooftops. Another option is concentrated power plants that run on heat energy.

Concentrated solar power plants convert solar energy into electricity by using mirrors or lenses to concentrate a lot of light onto a small area, which generates heat that is transferred to a molten salt. Heat from the molten salt is then transferred to a "working" fluid, supercritical carbon dioxide, that expands and works to spin a turbine for generating electricity.

To make solar-powered electricity cheaper, the turbine engine would need to generate even more electricity for the same amount of heat, which means the engine needs to run hotter.

The problem is that heat exchangers, which transfer heat from the hot molten salt to the working fluid, are currently made of stainless steel or nickel-based alloys that get too soft at the desired higher temperatures and at the elevated pressure of supercritical carbon dioxide.

Inspired by the materials his group had previously combined to make "composite" materials that can handle high heat and pressure for applications like solid-fuel rocket nozzles, Sandhage worked with Asegun Henry, now at the Massachusetts Institute of Technology, to conceive of a similar composite for more robust heat exchangers.

Two materials showed promise together as a composite: The ceramic zirconium carbide, and the metal tungsten.

Purdue researchers created plates of the ceramic-metal composite. The plates host customizable channels for tailoring the exchange of heat, based on simulations of the channels conducted at Georgia Tech by Devesh Ranjan's team.

An economic analysis by Georgia Tech and Purdue researchers also showed that the scaled-up manufacturing of these heat exchangers could be conducted at comparable or lower cost than for stainless steel or nickel alloy-based ones.

“Ultimately, with continued development, this technology would allow for large-scale penetration of renewable solar energy into the electricity grid,” Sandhage said. “This would mean dramatic reductions in man-made carbon dioxide emissions from electricity production.”

A patent application has been filed for this advancement. The work is supported by the U.S. Department of Energy, which has also recently awarded additional funding for further development and scaling up the technology.

Note to Journalists: For a full-text copy of the paper, please contact Kayla Wiles, Purdue News Service, at wiles5@purdue.edu. A YouTube video is available at https://youtu.be/PMC3EE19ouw, and other multimedia can be found in a Google Drive folder at http://bit.ly/2P5kWr3. The materials were prepared by Erin Easterling, digital producer for the Purdue College of Engineering, 765-496-3388, easterling@purdue.edu.

*Correspondence and requests for materials should be addressed to K.H.S. (e-mail: sandhage@purdue.edu)

The efficiency of generating electricity from heat using concentrated solar power plants (which use mirrors or lenses to concentrate sunlight in order to drive heat engines, usually involving turbines) may be appreciably increased by operating with higher turbine inlet temperatures, but this would require improved heat-exchanger materials. By operating turbines with inlet temperatures above 1,023 kelvin using closed-cycle high-pressure supercritical carbon dioxide (sCO2) recompression cycles instead of using conventional (such as subcritical steam Rankine) cycles with inlet temperatures below 823 kelvin1-3, the relative heat-to-electricity conversion efficiency may be increased by more than 20 per cent. The resulting reduction in the cost of dispatchable electricity from concentrated solar power plants (coupled with thermal energy storage4-6) would be an important step towards direct competition with fossil-fuel-based plants and a large reduction in greenhouse gas emissions7. However, the inlet temperatures of closed-cycle high-pressure sCO2 turbine systems are limited8 by the thermomechanical performance of the compact, metal-alloy-based, printed-circuit-type heat exchangers used to transfer heat to sCO2. Here we present a robust composite of ceramic (zirconium carbide, ZrC) and the refractory metal tungsten (W) for use in printed-circuit-type heat exchangers at temperatures above 1,023 kelvin9. This composite has attractive high-temperature thermal, mechanical and chemical properties and can be processed in a cost-effective manner. We fabricated ZrC/W-based heat-exchanger plates with tunable channel patterns by the shape-and-size-preserving chemical conversion of porous tungsten carbide plates. The dense ZrC/W-based composites exhibited failure strengths of over 350 megapascals at 1,073 kelvin, and thermal conductivity values two to three times greater than for iron- or nickel-based alloys at this temperature. Corrosion resistance to sCO2 at 1,023 kelvin and 20 megapascals was achieved10 by bonding a copper layer to the composite surface and adding 50 parts per million carbon monoxide to sCO2. Techno-economic analyses indicate that ZrC/W-based heat exchangers can strongly outperform nickel-superalloy-based printed-circuit heat exchangers at lower cost.