WEST LAFAYETTE, Ind. — More than 60 million people in the U.S. suffer from disorders in the gastrointestinal tract that could be cured by electrical stimulation, but scientists don't fully understand the therapy's effects on a critical organ: the stomach.

Purdue University researchers used an MRI to show a play-by-play of how sending an electric impulse to the vagus nerve successfully corrects stomach complications. The technique paves the way for more precise treatment that drugs and dietary changes have not achieved.

"Eventually, by asking a patient to undergo multiple MRI scans with different electrical stimulation settings, we could figure out the best stimulation setting for alleviating that particular patient's symptoms," said Kun-Han "Tom" Lu, a Ph.D. student in electrical and computer engineering.

The work, which is published as the cover of the journal Neurogastroenterology and Motility in its October 2018 issue, aligns with Purdue's Giant Leaps celebration, acknowledging the university’s global advancements made in health, longevity and quality of life as part of Purdue’s 150th anniversary. This is one of the four themes of the yearlong celebration’s Ideas Festival, designed to showcase Purdue as an intellectual center solving real-world issues.

Digestive disorders create a medical burden of billions of dollars every year.

One important indicator of a digestive disorder is the rate at which the stomach empties of food, called "gastric emptying," into the small intestine for the absorption of nutrients. Slow gastric emptying in the disorder gastroparesis, for example, means that stomach muscles aren't moving properly.

"Some stimulation protocols for the stomach in humans already have FDA approval, but they've proved only partially effective," said Terry Powley, Purdue's Distinguished Professor of Neuroscience and the director of the SPARC (Stimulating Peripheral Activity to Relieve Conditions) project, an initiative of the National Institutes of Health to map out the stomach's neural circuitry. 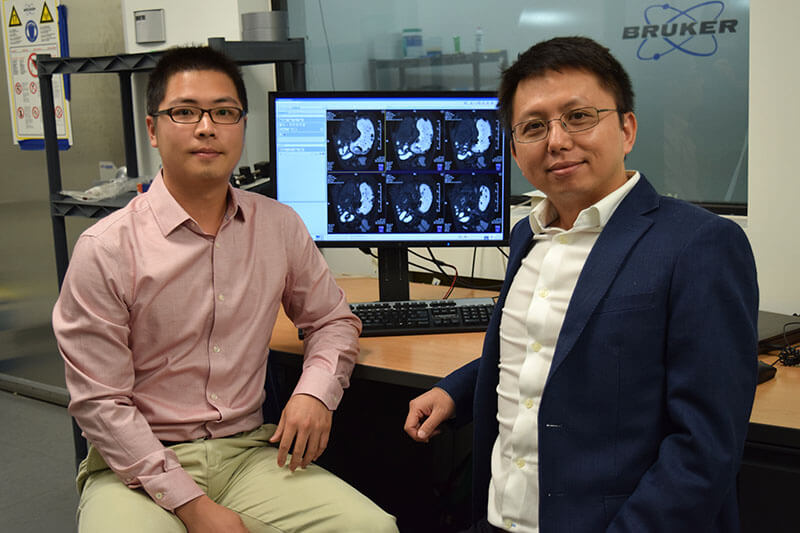 As part of the SPARC project, Purdue researchers proposed using MRIs in small animals to get a better view of the effects of vagus nerve stimulation on the stomach.

"MRIs are non-invasive, show tissue contrast well and make it easier to repeat an experiment for verification," Lu said. A YouTube video is available at https://youtu.be/ewsx0g2suSE.

Lu stimulated the vagus nerve to control the pyloric sphincter in rats, the valve that controls food leaving the stomach and entering the small intestine. He then created 3D reconstructions of MRI images over time. The images showed that stimulation relaxed the pyloric sphincter, speeding up gastric emptying to potentially correct delayed emptying in the case of gastroparesis, or other kinds of gastrointestinal malfunction.

"This method provides the physiological information for understanding the impacts of any treatment so that it can be fine-tuned for a specific organ or a specific disorder," said Zhongming Liu, assistant professor of biomedical engineering and electrical and computer engineering.

The researchers plan to push the technology to retrieve even more information about gastric physiology and conduct their own tests of different treatments on gastric disorders.

The work was supported in part by SPARC (grant 1OT2TR001965) and Purdue University.

Note to Journalists: For a full-text copy of the paper, please contact Kayla Wiles, Purdue News Service, at wiles5@purdue.edu. A YouTube video is available at https://youtu.be/ewsx0g2suSE and other multimedia can be found in a Google Drive folder at http://bit.ly/2NXhbPP. The video was prepared by Erin Easterling, digital producer for the Purdue College of Engineering, 765-496-3388, easterling@purdue.edu.

Vagus nerve stimulation (VNS) is an emerging electroceutical therapy for remedying gastric disorders that are poorly managed by pharmacological treatments and/or dietary changes. Such therapy seems promising as the vagovagal neurocircuitry modulates the enteric nervous system to influence gastric functions.

Here, the modulatory effects of left cervical VNS on gastric emptying in rats were quantified using a (i) feeding protocol in which the animal voluntarily consumed a postfast, gadolinium‐labeled meal and (ii) a non‐invasive imaging method to measure antral motility, pyloric activity and gastric emptying based on contrast‐enhanced magnetic resonance imaging (MRI) and computer‐assisted image processing pipelines.

The MRI protocol employed in this study is expected to enable advanced preclinical studies to understand stomach pathophysiology and its therapeutics. Results from this study suggest an electroceutical treatment approach for gastric emptying disorders using cervical VNS to control the degree of pyloric sphincter relaxation.