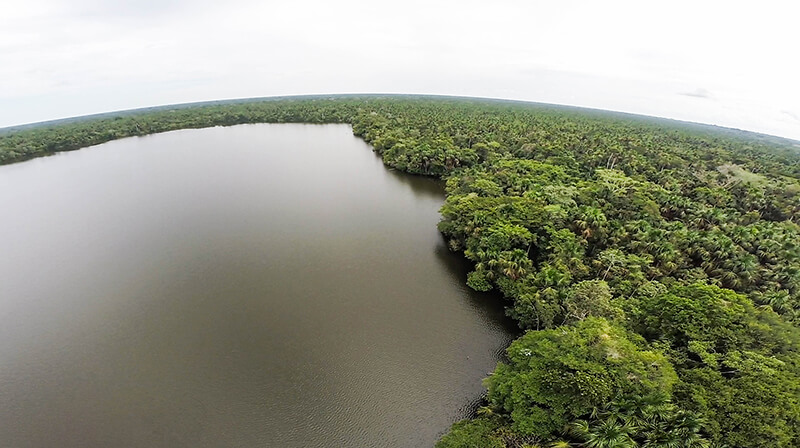 Peatlands in the Peruvian Amazon could soon start emitting carbon rather than soaking it up, according to a new study. (Samantha Lloyd/Arizona State University School of Life Sciences)

WEST LAFAYETTE, Ind. — Until humans can find a way to geoengineer ourselves out of the climate disaster we’ve created, we must rely on natural carbon sinks, such as oceans and forests, to suck carbon dioxide out of the atmosphere. These ecosystems are deteriorating at the hand of climate change, and once destroyed they may not only stop absorbing carbon from the atmosphere, but start emitting it.

Ecosystems that host a carbon-dioxide rich type of soil called peat, known as peatlands, are the most efficient natural carbon sink on the planet. When undisturbed, they store more carbon dioxide than all other vegetation types on Earth combined. But when they’re drained and deforested, they can release nearly 6 percent of global carbon dioxide emissions each year. Climate researchers are worried that many of the peatlands soaking up carbon now will soon be doing the opposite.

“Global peatlands cover only about 3 percent of global land area, but hold around 30 percent of the earth’s soil organic carbon,” said Qianlai Zhuang, a professor of earth, atmospheric and planetary sciences at Purdue University. “Peatlands act like a ‘terrestrial ocean’ because of their sequestering carbon, but will this large amount of peat carbon be released under a warmer climate, causing further warming?”

In collaboration with Sirui Wang, a Ph.D. candidate at Purdue, Zhuang looked to peatlands in the Peruvian Amazon to try to answer this question.

According to an earth systems model spanning from 12,000 years ago to 2100 AD, this relatively small basin could lose up to 500 million tons of carbon by the end of this century. That’s about 5 percent of current global annual fossil fuel carbon emissions, or 10 percent of U.S. emissions, being spit back out into the atmosphere.

By most estimates, South America will become both warmer and wetter by the end of the century. Zhuang’s findings, which were published in Proceedings of the National Academy of Sciences on Monday, show that higher temperatures lead to more peat carbon loss, while increased precipitation slightly enhances the build-up of peat carbon over long timescales. Together, this is likely to increase carbon loss from peatlands to the atmosphere.

Peatlands in northwest Peru remain nearly intact, but this is isn’t the case in most places with significant peat stocks, which are being cleared to make room for agriculture. Peatlands in some parts of the world, including Canada, Siberia and Southeast Asia, have already turned into significant carbon sources.  The same fate may be coming soon for the Peruvian peatlands.

“If the area we looked at could represent the whole Amazonia or tropical peatlands, the loss of peat carbon to the atmosphere under future climate scenarios should be of great concern to our society,” Zhuang said. “Agricultural intensification and increasing land-use disturbances, such as forest fires, threaten the persistence of peat carbon stocks. These peatland ecosystems may turn into carbon sources instead of sinks unless necessary actions are taken.”

Researchers from Arizona State University, the Carnegie Institution for Science and Florida International University contributed to this work. The study was supported by the National Science Foundation and Department of Energy.

Amazonian peatlands store a large amount of soil organic carbon (SOC) and its fate under a future changing climate is unknown. Here we use a process-based peatland biogeochemistry model to quantify the carbon accumulation for peatland and non-peatland ecosystems in the Pastaza-Marañon foreland basin (PMFB) in the Peruvian Amazon from 12,000 years before present to 2100 AD. Model simulations indicate that warming accelerates peat SOC loss while increasing precipitation accelerates peat SOC accumulation at millennial time scales. The uncertain parameters and spatial variation of climate are significant sources of uncertainty to modeled peat carbon accumulation. Under warmer and presumably wetter conditions over the 21st century, SOC accumulation rate in the PMFB slows down to 7.9 (4.3~12.2) g C m%& yr%) from the current rate of 16.1 (9.1~23.7) g C m%& yr%) and the region may turn into a carbon source to the atmosphere at -53.3 (-66.8~-41.2) g C m%& yr%) (negative indicates source), depending on the level of warming. Peatland ecosystems show a higher vulnerability than non-peatland ecosystems as indicated by the ratio of their soil carbon density changes (ranging from 3.9 to 5.8). This is primarily due to larger peatlands carbon stocks and more dramatic responses of their aerobic and anaerobic decompositions in comparison with non-peatland ecosystems under future climate conditions. Peatland and non-peatland soils in the PMFB may lose up to 0.4 (0.32~0.52) Pg C by 2100 AD with the largest loss from palm swamp. The carbon-dense Amazonian peatland may switch from a current carbon sink into a source in the 21st century.