This accelerating light pulse (left) met expectations (right) that it would follow a curved trajectory and emit radiation at the terahertz frequencies of security technology and other sensing applications. (University of Michigan video/Meredith Henstridge)

WEST LAFAYETTE, Ind. — The DESY accelerator facility in Hamburg, Germany, goes on for miles to host a particle making kilometer-long laps at almost the speed of light. Now researchers have shrunk such a facility to the size of a computer chip.

A University of Michigan team in collaboration with Purdue University created a new device that still accommodates speed along circular paths, but for producing lower light frequencies in the terahertz range of applications such as identifying counterfeit dollar bills or distinguishing between cancerous and healthy tissue.

"In order to get light to curve, you have to sculpt every piece of the light beam to a particular intensity and phase, and now we can do this in an extremely surgical way," said Roberto Merlin, the University of Michigan's Peter A. Franken Collegiate Professor of Physics.

The work is published in the journal Science. Ultimately, this device could be conveniently adapted for a computer chip.

"The more terahertz sources we have, the better. This new source is also exceptionally more efficient, let alone that it's a massive system created at the millimeter scale," said Vlad Shalaev, Purdue's Bob and Anne Burnett Distinguished Professor of Electrical and Computer Engineering. 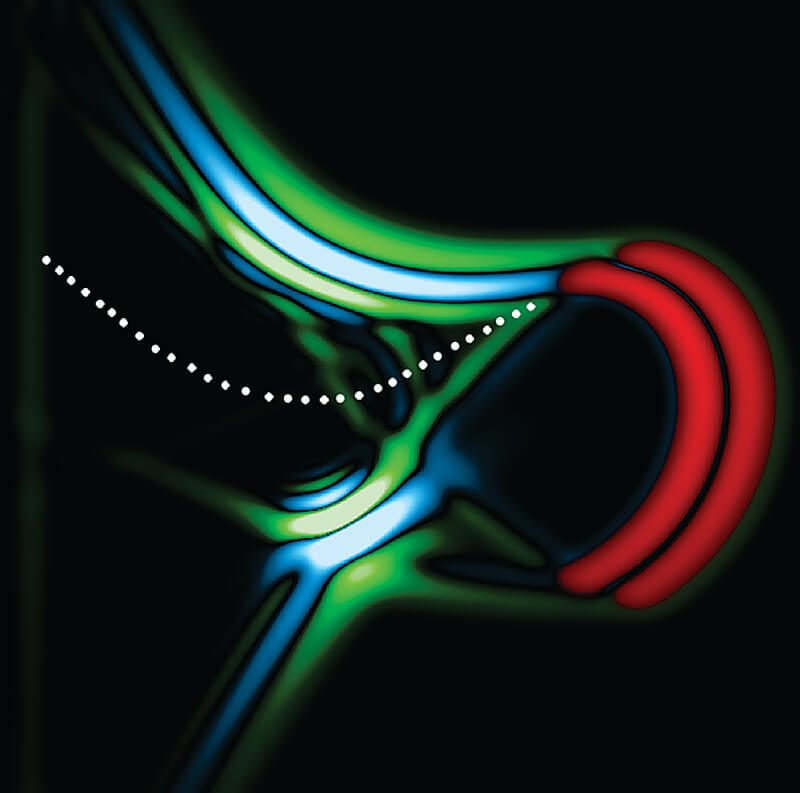 A new device bends visible light inside a crystal to produce "synchrotron" radiation (blue and green) via an accelerating light pulse (red) on a scale a thousand times smaller than massive facilities around the world. (University of Michigan image/Meredith Henstridge) Download image

The device that Michigan and Purdue researchers built generates so-called "synchrotron" radiation, which is electromagnetic energy given off by charged particles, such as electrons and ions, that are moving close to the speed of light when magnetic fields bend their paths.

Several facilities around the world, like DESY, generate synchrotron radiation to study a broad range of problems from biology to materials science.

But past efforts to bend light to follow a circular path have come in the form of lenses or spatial light modulators too bulky for on-chip technology.

A team led by Merlin and Meredith Henstridge, now a postdoctoral researcher at the Max Planck Institute for the Structure and Dynamics of Matter, substituted these bulkier forms with about 10 million tiny antennae printed on a lithium tantalite crystal, called a "metasurface," designed by the Michigan team of Anthony Grbic and built by Purdue researchers.

The researchers used a laser to produce a pulse of visible light that lasts for one trillionth of a second. The array of antennae causes the light pulse to accelerate along a curved trajectory inside the crystal.

Instead of a charged particle spiraling for kilometers on end, the light pulse displaced electrons from their equilibrium positions to create "dipole moments." These dipole moments accelerated along the curved trajectory of the light pulse, resulting in the emission of synchrotron radiation much more efficiently at the terahertz range.

"This isn't being built for a computer chip yet, but this work demonstrates that synchrotron radiation could eventually help develop on-chip terahertz sources," Shalaev said.

Synchrotron radiation—namely, electromagnetic radiation produced by charges moving in a curved path—is regularly generated at large-scale facilities where giga–electron volt electrons move along kilometer-long circular paths.We use a metasurface to bend light and demonstrate synchrotron radiation produced by a subpicosecond pulse, which moves along a circular arc of radius 100 micrometers inside a nonlinear crystal. The emitted radiation, in the terahertz frequency range, results from the nonlinear polarization induced by the pulse. The generation of synchrotron radiation from a pulse revolving about a circular trajectory holds promise for the development of on-chip terahertz sources.