IU wins the Purdue vs. IU debate: What IF you could disappear from the internet? 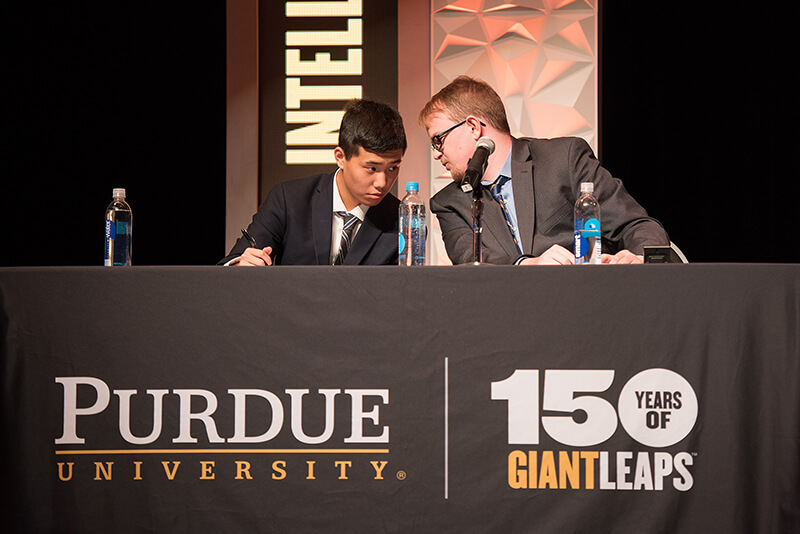 WEST LAFAYETTE, Ind. —  Indiana University is the winner of the Purdue vs. IU debate “What IF you could disappear from the Internet” that took place Wednesday (Nov. 7).

The winner was decided by voting from the inhouse audience as well as viewers who watched the event via a livestream.

Two members of Purdue’s speech and debate team, the C. Richard Petticrew Forum, and two members of Indiana University’s debate team debated over whether the U.S. federal government should make “the right to be forgotten” from internet searches a civil right. The students covered implications for privacy, criminal activity, careers, censorship and cyberbullying.

The debate is a part of Purdue’s celebration of its 150th year and specifically of the anniversary’s Ideas Festival, the centerpiece of Purdue’s Giant Leaps Sesquicentennial Campaign. The Ideas Festival will feature a series of events that connect world-renowned speakers and Purdue expertise in a conversation on the most critical problems facing the world. Al, Algorithms and Automation: Balancing Humanity and Technology is one of the Ideas Festival themes.

Note to Journalists: Broadcast-quality b-roll from the event is available here: https://drive.google.com/open?id=1UHjhybAbHZQHqhenoq3A7IKFJe182WMP