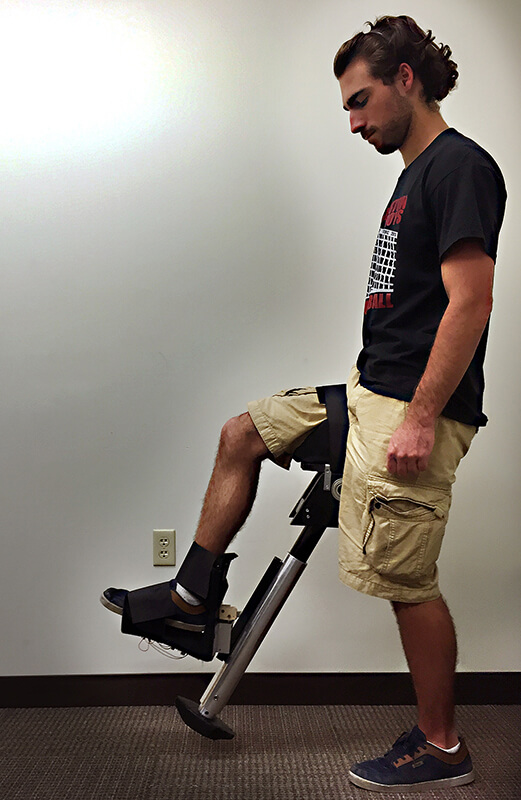 WEST LAFAYETTE, Ind. – A snowboarding accident led a group of Purdue University students to create a new kind of hands-free crutch aimed at helping injured people avoid obstacles typically associated with using crutches to get around.

The “Clutch Crutch” is an ergonomic, hands-free crutch invented by six Purdue graduates that reinvents traditional crutches. Injured people are able to retain a natural movement, keep pressure away from the injury and avoid other obstacles typically associated with crutches.

The founders of the device, Brett Adams, Sameer Saiya, Nikko Sadural, Jeff Cargill, Junyan Lim and Andrew Fan, all graduated from Purdue’s School of Mechanical Engineering in May 2016. Their diverse backgrounds, passion and entrepreneurial spirit sparked a conversation on what they can do to solve a problem in today’s world. They began developing Clutch Crutch during their time as undergraduate students at Purdue.

After suffering from a snowboarding injury and having to use crutches for a few months, Adams believed traditional crutches were a problem worth tackling.

“I found that using conventional crutches made completing mundane daily tasks extremely difficult and were extremely uncomfortable,” Adams said. “Trying to maneuver with the regular crutches inspired me to create a new type of crutch.”

Adams’ idea was met with little enthusiasm at first, until Saiya found himself on crutches a week later due to a sprained ankle. It was then that he was able to relate to the issues Adams had described and understand the significance behind pursuing this project.

“The problem we were solving became crystal clear at that point,” Saiya said. “We needed to create a recovery device for injuries below the knee that could allow patients to go about their lives with little to no difficulty during the recovery process.”

According to Orthogate, crutches can cause nerve ending damage in the armpits, skin irritation and joint and muscle pain. Crutches also tend to cause slipping and falling. The Clutch Crutch team wanted to ensure that their new device solved these problems.

“The device should not slip on icy surfaces, it should not be hard to take on and off, it should not constrict any major blood vessel, nerve endings or glands, and the user should be able to comfortably stand and move using it without needing excessive energy,” Saiya said.

The team used that as a guide to designing their prototype. They aimed to design a device that redirects the pressure to the quadriceps, the muscle at the front of the thigh. The quadriceps is a relatively strong muscle compared with the rest of the body and would be able to provide adequate support without causing any nerve ending damage or adding pressure to the injury.

Creating a prototype took time and a lot of deliberations. Nevertheless, they were successful in producing a prototype that fit all their requirements. The team decided to showcase their innovation on Facebook by posting a video of Adams using the device.

An application has also been designed by Fan, one of the founders, which could be used alongside the Clutch Crutch to provide doctors with real-time data on how much force is being placed on the injured leg to aid in tracking progress.

An existing alternative to crutches is the knee scooter; however, that ends up putting a lot of pressure on the knee, which can be damaging. Additionally, the Clutch Crutch allows the injured person to walk easily on different terrains and even stairs.

Their work aligns with Purdue's Giant Leaps celebration, celebrating the university’s global advancements in health as part of Purdue’s 150th anniversary. This is one of the four themes of the yearlong celebration’s Ideas Festival, designed to showcase Purdue as an intellectual center solving real-world issues.

The Clutch Crutch team worked with the Purdue Office of Technology Commercialization to file a patent on the innovation, and they are looking for partners to continue developing it.