WEST LAFAYETTE, Ind. – For most, cholera comes as a mild to moderate form of diarrhea. For others, the diarrhea quickly causes dangerous fluid loss – up to a quart an hour – and has a milky appearance. Then comes hours of vomiting, and possibly death from organ failure.

One of the world’s most preventable and treatable diseases is sickening more than 3 million people every year and killing more than 95,000, according to the World Health Organization. But technology developed at Purdue University could help change that.

Researchers have developed a smartphone technology app that provides a ‘cholera detection lab.’ The technology is being commercialized through a Purdue University-affiliated startup. The founder of the startup believes this technology can do much to save lives. 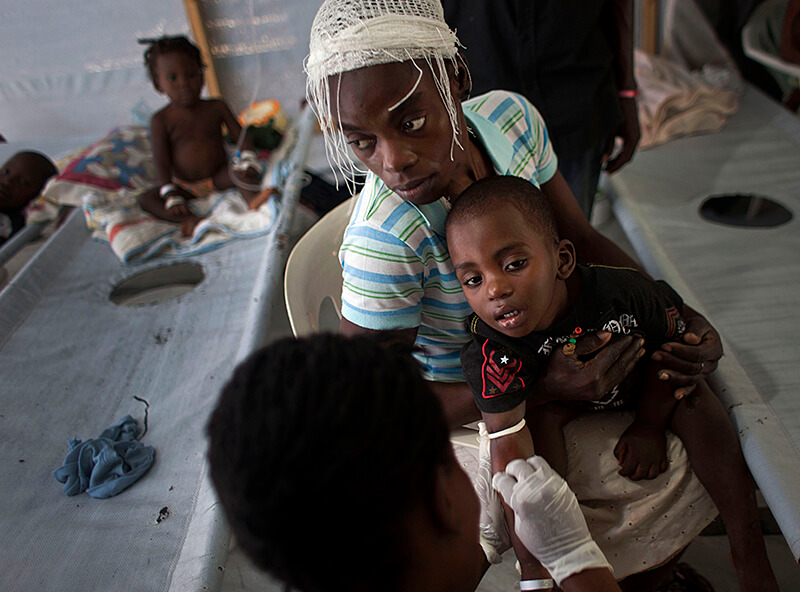 Photo Caption: In this photo, a woman holds her sick child as he receives treatment for cholera in Port-au-Prince, Haiti. Purdue University ‘lab-in-hand’ smartphone technology may help stop cholera and other deadly disease outbreaks before they happen. (AP Photo)

OmniVis, co-founded by Purdue College of Engineering alumnae Katherine Clayton and three professors, uses a hardware device and consumable test kit to collect and analyze water samples. The technology then maps out the results within 30 minutes, compared with the 3-5 days it may take with conventional cholera detection methods.

More than $2 billion is spent in treatment and lost in reduced productivity due to cholera, which is caused by contaminated food or water.

Women in sub-Saharan Africa spend a combined average of about 200 million hours per day collecting water, and a whopping 40 billion hours per year, according to the United Nations.

“I went to Purdue for my Ph.D. because I knew I wanted to make a difference in global health,” Clayton said. “The caliber of Purdue professors and students, along with phenomenal resources like the Purdue Foundry, truly enable researchers to take what they learn in the lab to struggling communities around the world. Working on this life-saving technology and now moving it to the public to help people is a life-changing experience.”

The World Health Organization reports that more than 780 million people globally do not have access to improved water sources, and 90 percent of infectious disease deaths are from contaminated water. About 3.4 million people die from water-related diseases such as cholera each year; about 40 percent of those are children.

Other members of the OmniVis team include Tamara Kinzer-Ursem and Jacqueline Linnes, assistant professors in the Weldon School of Biomedical Engineering at Purdue; Steven Wereley, a professor in the School of Mechanical Engineering at Purdue; and Lynne Cheng, who serves as their head of operations.  Two Purdue interns, Taylor Moehling and Jay Lee, contributed significantly to the technology development.

Members of the team will travel to Haiti, one of the countries with the most cases of cholera over the past decade, in January for a field test of their detection system.

Their work aligns with Purdue's Giant Leaps celebration, acknowledging the university’s global advancements in health as part of Purdue’s 150th anniversary. This is one of the four themes of the yearlong celebration’s Ideas Festival, designed to showcase Purdue as an intellectual center solving real-world issues.

The technology is being patented through the Purdue Office of Technology Commercialization, and OmniVis is looking for partners.