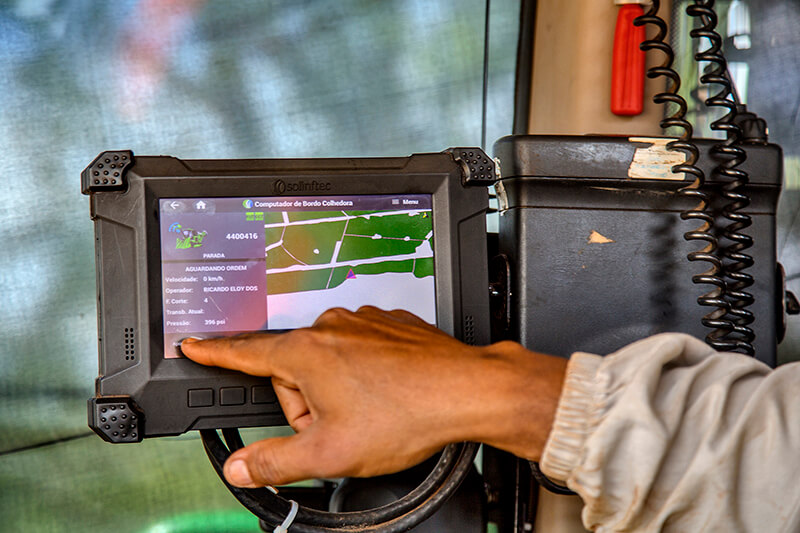 Solinftec, a leading digital ag company based in Brazil, to expand its innovative technology by providing American farmers with actionable insights, plans to establish office at Purdue Research Park, create 90 jobs in 2019 and more than 300 by 2022.

WEST LAFAYETTE, Ind. – Solinftec, a digital agriculture company that grew quickly in Latin America by making sugar cane and row crop operations more efficient, announced Thursday (Nov. 29) that it plans to establish operations at its U.S. headquarters near Purdue University to bring high-tech solutions to American farmers, creating 90 jobs in 2019 and up to 334 high-wage jobs by 2022.

“Solinftec has shown a passion for discovering innovative solutions to improve agriculture operations through science, engineering and more recently AI,” said Daniel Padrão, Solinftec’s chief operating officer. “That is why we are excited about the opportunity to work with a renowned research university such as Purdue and its College of Agriculture as we continue to expand our platforms into new geographies.”

Solinftec (SOL-inf-tek) plans to expand its innovations to the U.S. and increase its tech-based offerings for U.S. customers in the agriculture industry. Solinftec built its reputation by creating Internet of Things platforms to integrate and digitize all aspects of farming operations. The company has the technology to monitor farming processes and provides real-time actionable insights that increase crop returns by acre.

“Following on the heels of Inari’s decision to locate its Seed Foundry at Purdue, this shows that the Wabash Heartland area, with Purdue as an economic magnet, has a very real chance of becoming a world center of precision agriculture,” Purdue University President Mitch Daniels said.

Indiana is a leading center for the agbiosciences, with the sector contributing roughly $16 billion to the state’s gross domestic product a year.  Approximately 65,000 jobs in Indiana are supported by agbioscience companies. Indiana is also a leading producer of corn, soybeans and processing tomatoes, which are areas in which Solinftec is looking to expand.

“Indiana is at the center of innovation in agtech, and today’s news is yet another example of the collaborative ecosystem we’ve created here,” Gov. Eric J. Holcomb said. “Solinftec choosing to locate its first U.S. operation and its U.S. headquarters in Tippecanoe County will not only create hundreds of high-skilled, high-wage jobs, but it will bolster an industry that is developing new solutions, improving agricultural products consumed around the world, and enabling farmers in Indiana and beyond to grow their operations.”­

Padrão said a factor in moving to Indiana was to be close to Purdue and its College of Agriculture, which is ranked as ninth best in the world according to QS World Rankings, and its Department of Agricultural and Biological Engineering, which is ranked as the best in the United States by US News and World Report. Solinftec also used Tom Farms in Huntington County as a trial farm to move into row crops.

"The U.S. Midwest is core to our strategy; we recognize its importance in the global food and its ag ecosystem. We are humbled and thrilled to launch our U.S. headquarters out of the state of Indiana. We thank the state government, AgriNovus Indiana, Purdue University and Tom Farms for their vision on supporting this initiative and for everyone’s Hoosier hospitality,” said Renato Hersz, Solinftec's strategy and corporate development director.

Another factor in Solinftec’s decision was the opportunity to work with the Wabash Heartland Innovation Network (WHIN), a consortium of 10 counties in north-central Indiana working to harness the power of internet-enabled sensors to develop the region into a global epicenter of digital agricultural and next-generation manufacturing. A recent $40 million grant from Lilly Endowment established the network.

“Just within the WHIN region in north-central Indiana, there are over 5,000 farms that could benefit from the insights generated by Solinftec’s ability to capture data from various sources and use that data to create predictive analyses,” said Johnny Park, CEO of WHIN. “They are an example of what is possible here and having them as a local leader will help us show others what is possible too. Together we can help our farmers be the best they can be.”

Solinftec’s solution is present in more than 16 million acres, and its equipment is monitored in real time by more than 100,000 daily users, according to Hersz. The company serves large international growers such as Raízen, which reports more than 3,000 monitored equipment, the largest telemetry system in the world. Other international companies served by Solinftec include Tereos, Cofco and British Petroleum, all in the field of sugar cane crops, and Amaggi, Bom Futuro e Terra Santa, a grower in row crops.

Among the 10 largest companies in the sugar and ethanol sector, eight are customers of the company, and among the five largest producers of grains and fibers three are in its portfolio.

Solinftec is working in relevant commercial and technological partnerships with original equipment manufacturers and cooperatives that will be announced in due time to serve the American farmer. Solinftec has also received Series B funding from AgFunder and TPG in their first round of 2018 AgTech investments, where they look to invest in bold and exceptional founders who are committed to building the next generation of agrifood tech companies.

As Indiana’s land-grant university, Purdue has Extension offices in all of Indiana’s 92 counties to assist farmers and growers across the state and conducts world-renowned agriculture research that serves the U.S. and the global society. The College of Agriculture also has been home to three World Food Prize laureates, two faculty and one distinguished alumnus.

Solinftec’s expansion into the Purdue Research Park was announced Thursday (Nov. 29) during the Agbioscience Innovation Summit put on by AgriNovus Indiana in Indianapolis.

“AgriNovus and Solinftec first crossed paths earlier this year at an Ag Tech conference in San Francisco,” said Beth Bechdol, president and CEO of AgriNovus Indiana. “Their commitment to bringing their technology to row crops and to the Midwest was clear, and I’m thrilled that they recognized the depth and diversity of Indiana’s agbioscience assets. It is exciting to see several companies in just a few short months move or expand in Indiana, and we welcome Solinftec to our agbioscience community.”

The collaboration aligns with Purdue's "Giant Leaps" celebrating the university’s global advancements made in health, space, artificial intelligence and sustainability highlights as part of Purdue’s 150th anniversary. Those are the four themes of the yearlong celebration’s Ideas Festival, designed to showcase Purdue as an intellectual center solving real-world issues.

Solinftec is the second agriculture-related business this month to announce plans to move into the Purdue Research Park. Inari, a Flagship Pioneering company, announced on Nov. 8 that it was expanding from Cambridge, Massachusetts, as it seeks to reintroduce genetic diversity into the seed industry.

“We are so happy to hear of Solinftec’s decision to locate here in West Lafayette. Indiana. Purdue, the Purdue Research Foundation, Tippecanoe County and Greater Lafayette Commerce have been leading the way in making our community one of the best places in the world to focus on technology, agriculture and their convergence. As a person who happily calls West Lafayette home, I know Solinftec will enjoy its new American hometown,” West Lafayette Mayor John R. Dennis said.

Solinftec officials will be available for live interviews and a photo opportunity at 5 p.m. today (Thursday, Nov. 29) at the JW Marriott during the 2018 Agbioscience Innovation Summit.

Founded in 2007, Solinftec provides solutions to give farm operations information about the status of their machines and their progress based on their positioning and what activity they’re undertaking. Combining this with harvest data, the company gives clients a verifiable record of their harvest and traceability from the farm to the truck to mill, without any human input. Solinftec is expanding its operations to America with its new U.S. headquarters in West Lafayette, Indiana.