But rather than building portable cellars or ovens, Purdue University researchers have engineered yeast "microbreweries" within disposable badges made of freezer paper, aluminum and tape. Simply adding a drop of water activates the yeast to show radiation exposure as read by an electronic device.

On a commercial level, the readout device could one day be a tablet or phone. The badge could also be adapted in the future for nuclear power plant workers and victims of nuclear disasters.

"You would use the badge when you're in the lab and recycle it after you've checked your exposure by plugging it into a device," said Manuel Ochoa, a postdoctoral researcher in Purdue's School of Electrical and Computer Engineering. Watch a YouTube video at https://youtu.be/U6jCUr_kYcY. 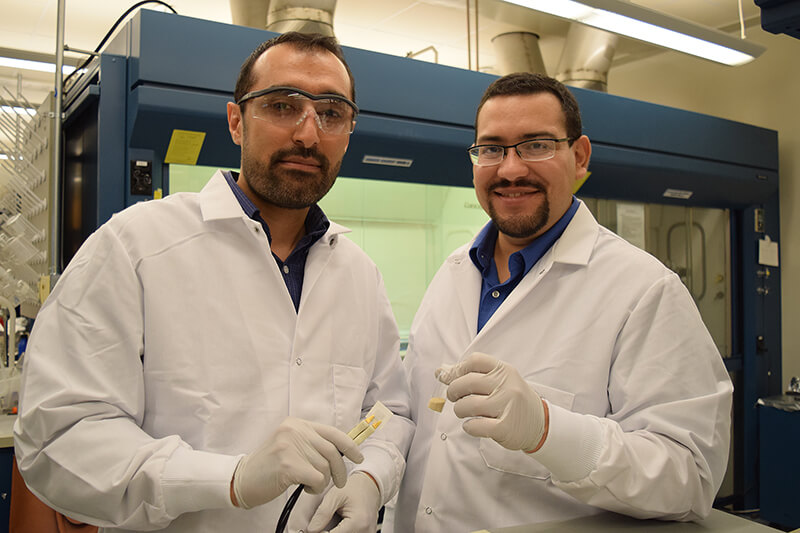 Radiology workers are regularly exposed to low doses of radiation when they obtain patient imagery, such as X-rays. While protective gear largely keeps workers within a safe range of radiation exposure, absorbing a little bit is still inevitable.

"Currently, radiology workers are required to wear badges, called dosimeters, on various parts of their bodies for monitoring their radiation exposure," said Babak Ziaie, Purdue professor of electrical and computer engineering. "They wear the badges for a month or two, and then they send them to the company that made them. But it takes weeks for the company to read the data and send a report back to the hospital. Ours give an instant reading at much lower cost." 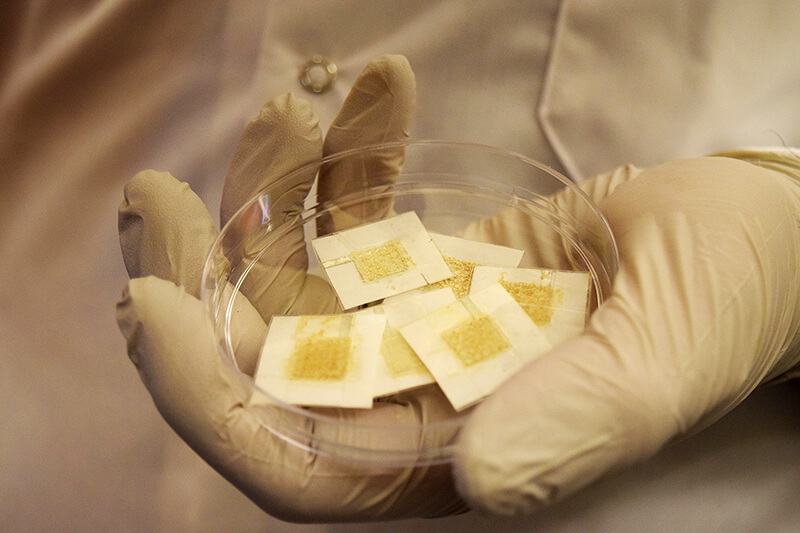 The success of the badge lies in the quick and measurable response of yeast to radiation: The higher the radiation dose, the higher the percentage of yeast cells that die. Wetting the badge activates the cells that are still alive to eat glucose and release carbon dioxide – the same fermentation process responsible for brewing beer and making bread rise.

When carbon dioxide bubbles at the surface, ions also form. The concentration of these ions increases the electrical conductivity of yeast, which can be measured by hooking up the badge to a readout system.

"We use the change in electrical properties of the yeast to tell us how much radiation damage it incurred. A slow decrease in electrical conductivity over time indicates more damage," said Rahim Rahimi, Purdue postdoctoral researcher in electrical and computer engineering.

Numbers from the readout system translate to rads – the units used by entities like the Occupational Safety and Health Administration to specify limits on how much radiation human tissue can safely absorb. Skin of the whole body, for example, shouldn't be exposed to more than 7.5 rad over a three month period. 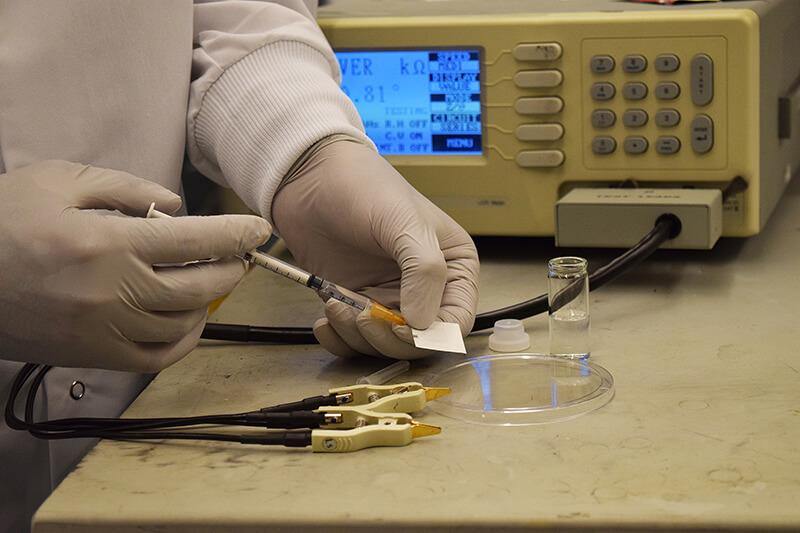 The researchers could detect a radiation dose as little as 1 millirad in the yeast badges, which is comparable to current commercial badges.

Yeast also is known to be genetically similar to human tissue. Data from the badges can, therefore, inform future work on how radiation damage happens to human DNA and proteins.

"For yeast, it seems that radiation primarily affects the cell walls of the membrane and mitochondria," Ochoa said. "Since biologists are already familiar with yeast, then we're more likely to understand what's causing the biological effects of radiation in organic matter."

Published findings appear in the journal Advanced Biosystems. A patent is pending for this technology via the Purdue Research Foundation. The research was partly funded by NextFlex under AFRL Cooperative Agreement No. FA8650-15-2-5401.

Note to Journalists: For a full-text copy of the paper, please contact Kayla Wiles, Purdue News Service, at wiles5@purdue.edu. A YouTube video is available at https://youtu.be/U6jCUr_kYcY, and other multimedia can be found in a Google Drive folder at http://bit.ly/2OWuLED​. The materials were prepared by Erin Easterling, digital producer for the Purdue College of Engineering, 765-496-3388, easterling@purdue.edu.

Wearable radiation sensors for workers of radiation-intensive industries provide a measure of radiation exposure but not of its effects on biological tissue. A biohybrid radiation sensing platform based on a new transduction mechanism for detecting biological radiation damage using the metabolic activity of a microorganism population is presented here. The sensor is a wearable, disposable, film-type device fabricated on a paper substrate with yeast (Saccharomyces cerevisiae) cells that are patterned between two conductive electrodes and used as a smart material. The device is sensitive to radiation when dry and can be read by activating it with water. Yeast (S. cerevisiae) cells, that are exposed to ionizing radiation and subsequently allowed to ferment a glucose solution, exhibit an electrical conductivity that is lower than that of nonexposed yeast. The radiation damage to this microoroganism is directly proportional to the measured impedance of the fermenting medium. An 18 × 18 mm2 and 0.57 mm thick sensors with ground yeast (3.09 mg cm−2 areal density filtered with a 50 μm mesh) shows a sensitivity of 4.5% Ω/Ω0 decade-rad upon exposure to Cs-137. The minimum detectable dose (resolution) is measured to be 1 mrad. Moreover, the source of the electrical response is investigated; fluorescence microscopy results suggest that it is primarily due to damaged membranes in the cell wall and mitochondria.