‘The Forge’ statue commemorates Boilermakers of past, future 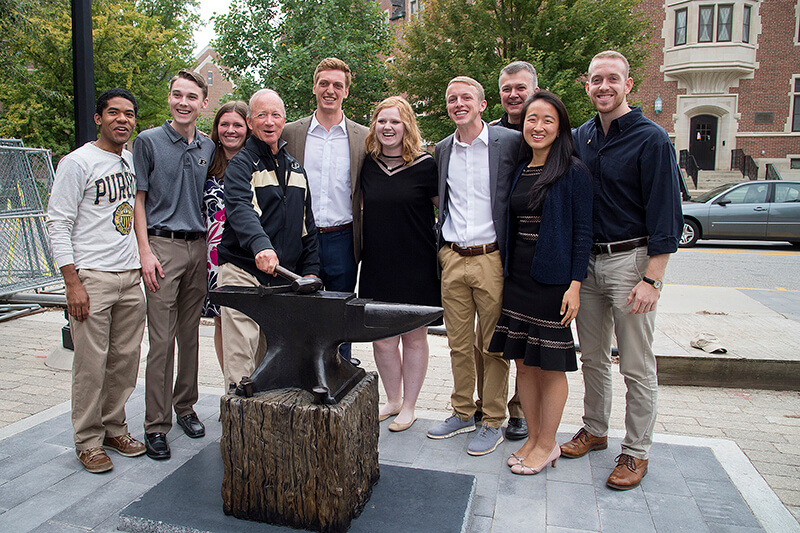 Purdue President Mitch Daniels, provost Jay Akridge and students dedicate “The Forge” during Homecoming weekend. The statue is located between Third Street Suites and Krach Leadership Center on the Third Street sidewalk, and it features a life-size hammer and anvil reminiscent of those used by real boilermakers in the past. (Purdue University photo/Mark Simons) Download image

WEST LAFAYETTE, Ind. — Today’s Boilermakers will be able to step into the role of a traditional Boilermaker thanks to the new statue, “The Forge.”

The statue is located between Third Street Suites and Krach Leadership Center on the Third Street sidewalk, and it features a life-size hammer and anvil reminiscent of those used by real boilermakers in the past. The Order of Iron Key dedicated the statue Saturday (Sept. 22) as part of the Homecoming 2018 celebration, which officially launched the Giant Leaps Sesquicentennial Campaign. The celebration continues through Homecoming 2019, and the emphasis will be on a series of Ideas Festivals, addressing some of the world’s greatest challenges.

A plaque in front of the statue encourages people to remember Boilermakers from the past 150 years and inspires them to do great things in the future.

“Early on, the group had a desire to create a physical representation of the history and success of Purdue’s first 150 years, while inspiring others to continue to excel and move the world forward,” says Roger Stewart, executive fellow in the Office of the Dean of Students, speaking on behalf of the Order of Iron Key. “With that, one of the members envisioned ‘The Forge’ and we bought in. The imagery of a hammer and anvil is one that is essential to Purdue and the idea that individuals can step up to it and become a true Boilermaker is exciting.”

The Order of Iron Key’s class of 2018 created the conceptual design of the sculpture, and Rick and Rita Hadley, a local bronze artist, brought the ideas to life. Hadley owns Moments in Bronze in Otterbein, Indiana, and is responsible for other Purdue projects, including the “Unfinished Block P” and the bust of Nobel laureate Ei-ichi Negishi. MKSK Studios, Curbmasters and MSI Stone also helped bring the project to life.

“We hope this piece can be an inspiration for anyone who comes upon it to leave their mark on campus and beyond,” Stewart said.

Note to Journalists: Video b-roll is available on Google Drive at https://drive.google.com/open?id=1hv0amAH4f0lHpRNV_kM9eQui6DkRs9L9