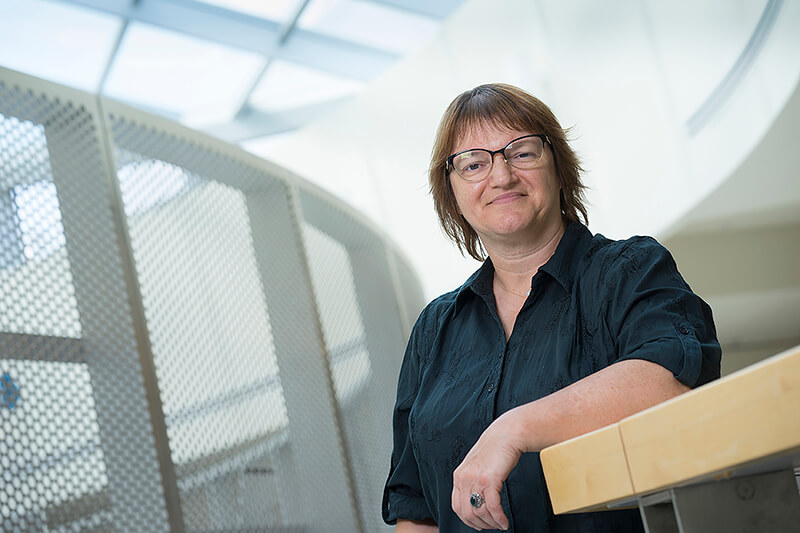 Sophie Lelièvre, a professor of cancer pharmacology at Purdue University, helped lead researchers to develop technology that allows different concentrations of a drug or a chemical to be targeted at different areas of the same cancerous tissue in the laboratory. (Image provided) Download image

WEST LAFAYETTE, Ind. – A new technology developed by Purdue University researchers allows different concentrations of a drug or a chemical to be targeted at different areas of the same cancerous tissue in the laboratory. The discovery may help the more than 1.7 million people the National Cancer Institute predicts will be diagnosed with the deadly disease this year in the United States.

The research team, including biologists from the Lelièvre laboratory and engineers from the Ziaie laboratory, created a technique, called gradient-on-a-chip.

It allows them to study the impact of the heterogeneity of delivery of therapeutic compounds and of chemicals formed in the organism on cells, recreating complex interactions as they occur in the body.

“We are pioneering a new way of thinking about the interaction between the microenvironment and normal and diseased cells within that environment,” said Sophie Lelièvre, a professor of cancer pharmacology at Purdue, who helped lead the research team. “We are able to re-create in the laboratory how cells, drugs and chemicals interact in the body and study how different regions of a tumor receive different concentrations of a substance contained in its environment.”

Such heterogeneity is suspected to promote cancer progression and resistance to treatment.

“This technology is very important because we can better understand not only how various treatments will work on sick cells, but also how harmful compounds taken up or created by the body may initiate cancers and other chronic diseases and promote disease progression,” Lelièvre said.

The Purdue team created a gradient, using a system similar to a maze a mouse may run through in the lab, using six layers of plastic and paper to create microchannels underneath an open culture chamber. The researchers then used what they know from the study of microfluidics to deliver the gradient, through the different microchannels, of a given chemical to the bottom of tumors in culture. The chemical then reaches cells by diffusion through a matrix.

Researchers are able to push various concentrations of liquids, such as drugs used to fight cancer, up into the cancerous tissue.

The new system also allows researchers to better understand the importance of tissue stiffness on cancer development and progression by controlling various aspects of the gradient technology. They also can test the effects of various drug concentrations on stiffness.

Purdue’s gradient technology is proving successful in testing the development and treatment of other diseases, since the open culture chamber can accommodate different types of tissue models.

The team worked with the Purdue Office of Technology Commercialization to submit a patent application for the technology. The research team is looking for partners.