Robots and drones making their own decisions? That’s the goal for Purdue-based AI research 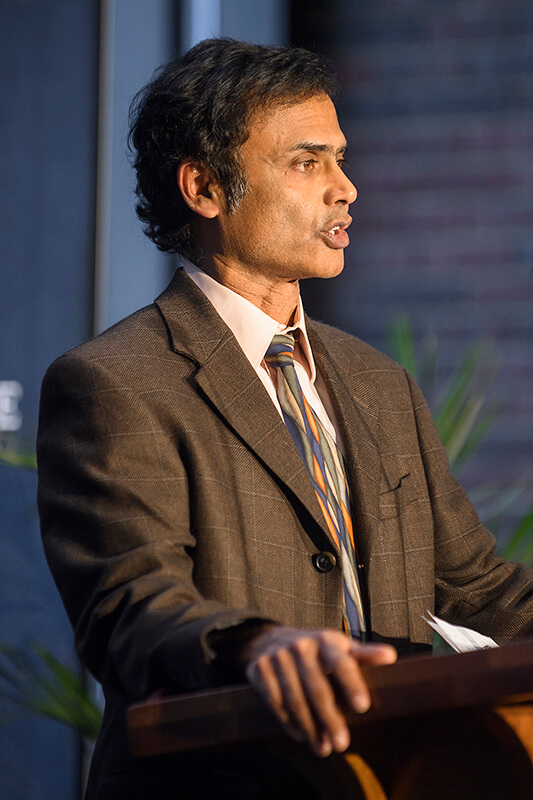 WEST LAFAYETTE, Ind. – What if a parent could feel safe allowing a drone to walk their child to the bus stop?

Drones are going to become more commonplace. The Federal Aviation Administration reports that 420,000 of them will be in the air by 2021.

New research at Purdue’s Center for Brain-inspired Computing Enabling Autonomous Intelligence, or C-BRIC, could direct drones and other robotic devices and machines to do even more through advanced artificial intelligence.

The research aligns with Purdue's giant leaps celebration, acknowledging the university’s global advancements made in health, space, artificial intelligence and sustainability as part of Purdue’s 150th anniversary. Those are the four themes of the yearlong celebration’s Ideas Festival, designed to showcase Purdue as an intellectual center solving real-world issues.

“Our research is going to go far beyond the traditional concepts of artificial intelligence,” said Kaushik Roy, Purdue’s Edward G. Tiedemann Jr. Distinguished Professor of Electrical and Computer Engineering, who will help Purdue lead the new national center. “Most research is focused on perception-centric intelligence. We are going to look at designing smart devices that can read and interpret data, but then take that information and use reasoning to make decisions. Today’s typical computing is unable to do those things very well.”

Researchers at C-BRIC are studying and developing algorithms that can allow personal robots, self-driving cars and drones to interpret their environments and then make decisions based on what they perceive.

The Purdue researchers also are studying distributed intelligence, the separation of certain processing functions in a system into separate machines. This kind of research would allow a smartphone to better interact with cloud technology to interpret large amount of information.

“This is only the beginning of the era for research into artificial intelligence,” Roy said. “Purdue can use its broad expertise across many disciplines to lead the best team of researchers across the United States to make a huge impact.”

The other Purdue faculty involved in the center are Anand Raghunathan, Suresh Jagannathan and Eugenio Culurciello.

C-BRIC involves 19 faculty and around 85 graduate students and postdoctoral researchers across several major universities. The center is supported by $32 million in funding from the Semiconductor Research Corp. through the Joint University Microelectronics Program, which provides funding from the Defense Advanced Research Projects Agency and a consortium of industrial sponsors.

Roy has worked with the Purdue Office of Technology Commercialization on patented technologies that are providing the basis for some of the research at C-BRIC. They are looking for partners to license the technology.