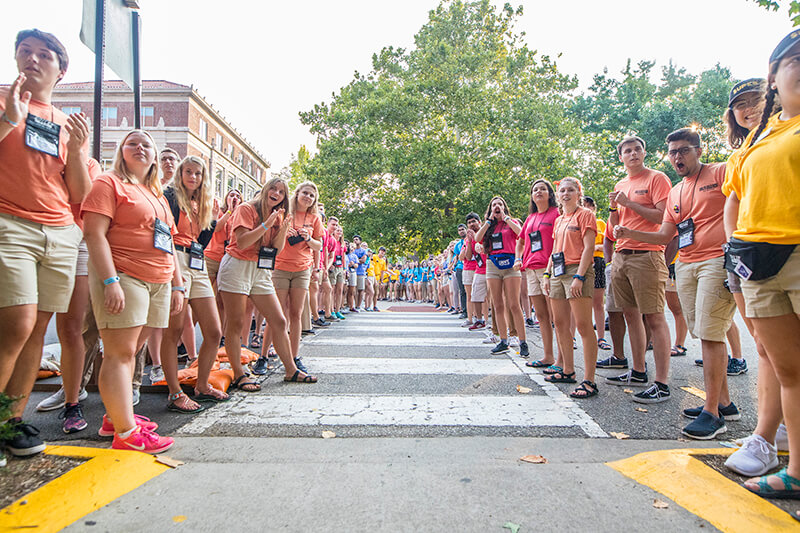 WEST LAFAYETTE, Ind. — With the arrival of its biggest entering class ever, Purdue University’s overall enrollment has reached its highest all-time level.

Total enrollment of 43,411 at Purdue’s West Lafayette campus set a new record, with a growth of 1,838 students over last year, and includes 32,672 undergraduates. While the fall enrollment number was projected last spring at 7,800 students, another 557 students arrived on the West Lafayette campus this fall. The incoming class of 8,357 freshmen is the largest ever, and with graduation rates increasing, this year’s entering class is projected to translate into record total graduates a few years from now.

Four- and six-year graduation rates for students who entered in 2014 and 2012, respectively, increased to 60.3 percent and 81.2 percent – both records up from the 58.5 percent and 78.7 percent, recorded last year. The one-year retention rate stands at 91.9 percent of the class that entered last year.

This first-year class again has outstanding academic preparation: The mean ACT score is 28.4 on a 36 scale, and SAT scores are 1289 on a 1600 scale. The average GPA is 3.66. Purdue also enrolled 105 new beginning National Merit Scholars. Purdue University’s incoming class of 8,357 freshmen is the largest ever. This year’s incoming class increase also reflects the largest number of Indiana resident students – 4,271 - in a decade and 952 more than just five years ago. Many of the first-year students attended August’s Boiler Gold Rush. (Purdue University photo/Brent Vaught) Download image

These fall enrollment numbers also follow a successful increase during the 2018 summer session at the West Lafayette campus with 16,696 students compared to 15,849 in 2017. Summer undergraduate enrollment was 9,698 compared to 9,059 last summer. A growth of 639 students represents the second-largest undergraduate summer enrollment increase in Purdue history. The number of summer new beginners also increased from 335 students last year to 520 this summer.

“Purdue’s reputation in higher education is built on quality and affordability, as well as an emphasis on supporting the student academic experience with leadership opportunities or study abroad,” said Purdue President Mitch Daniels. “Families know, and employers constantly confirm, that a Purdue education provides an unsurpassed preparation for a successful career and a fulfilling life.”

“Purdue is strategically increasing enrollment numbers, but this extraordinary growth is unprecedented, especially with a population of such high-caliber students. We’ve been planning for growth, but when the incoming students’ spring deposits indicated the number would be even higher than expected, we immediately started to increase and support more advisers, teaching assistants, academic services and housing options.”

“We are excited to see our retention and graduation rates continue to climb, as it means even more Purdue graduates are moving into the workforce every year. More students completing their degree in a timely way also means lower costs for students and their families. Purdue students are arriving academically prepared, they are working hard, and with the support of our faculty and staff, are moving successfully through our program in record numbers.”