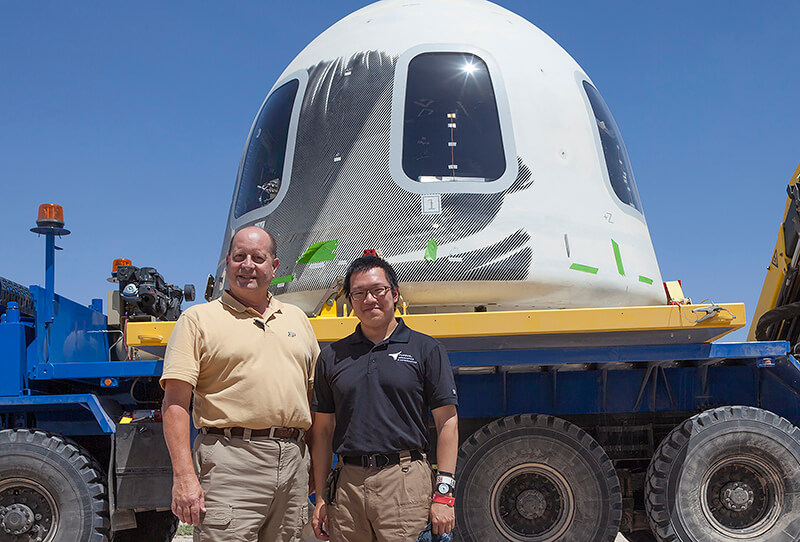 Steven Collicott, professor of aeronautics and astronautics at Purdue, and Shih-Pin 'Benny' Cheng, an undergraduate student in Collicott’s Zero-Gravity Flight Experiment class, stand in front of the New Shepard crew capsule at the Blue Origin fcility in Texas. (Photo/Blue Origin)

Professor Steven Collicott and his Zero-Gravity Flight Experiment class designed their payload on the Wednesday (July 18) flight from a private location in Texas, to test predictions for how liquid forms droplets or plugs in small tubes in weightlessness, such as in the condenser of a heat transfer loop in a spacecraft.

Applications on Earth include the presence of water droplets in lung passages and the control of condensed liquid in fuel cell gas passages.

The Condensed Droplet Experiment for NASA in Suborbital Spaceflight (ConDENSS) was designed and built over the last two years by undergraduate students and a master’s student in the College of Engineering’s School of Aeronautics and Astronautics.

“Flying experiments like this spaceflight technology payload for NASA on a commercial re-usable rocket will soon be common,” said Collicott, a professor of aeronautics and astronautics. “With a launch cost that is only a few percent of older, single-use rockets, this new space industry is opening up more options for space-based experimentation than most of us ever dared to hope for a decade ago.”

During the flight, the experiment controlled a series of injections and withdrawals of small liquid amounts into eight specially designed tube-like test sections. Unique computer models created by the team predict whether the various liquid volumes form droplets, sleeves or plugs in the different test sections.

Video data from the experiment are used to test the predictive ability of the models. It takes about six months for data analysis and a comparison to modeling. Collicott said an initial look at the data on Wednesday was unclear.