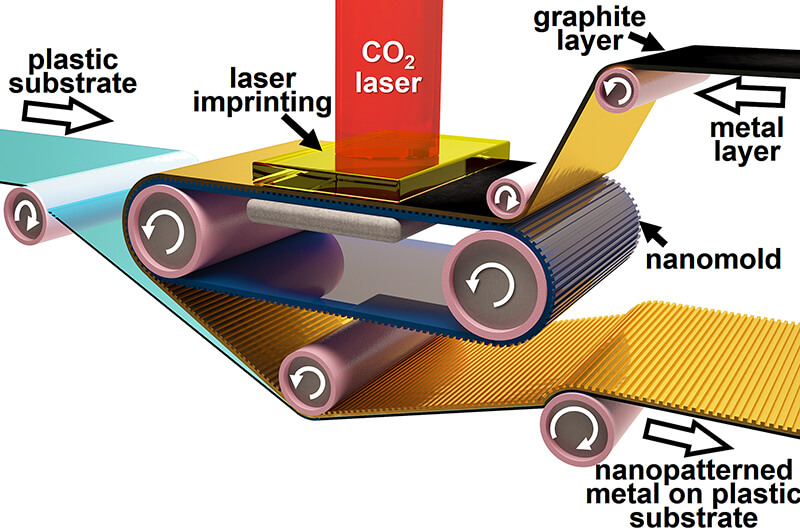 The low-cost process, developed by Purdue University researchers, combines tools already used in industry for manufacturing metals on a large scale, but uses the speed and precision of roll-to-roll newspaper printing to remove a couple of fabrication barriers in making electronics faster than they are today.

Cellphones, laptops, tablets, and many other electronics rely on their internal metallic circuits to process information at high speed. Current metal fabrication techniques tend to make these circuits by getting a thin rain of liquid metal drops to pass through a stencil mask in the shape of a circuit, kind of like spraying graffiti on walls. 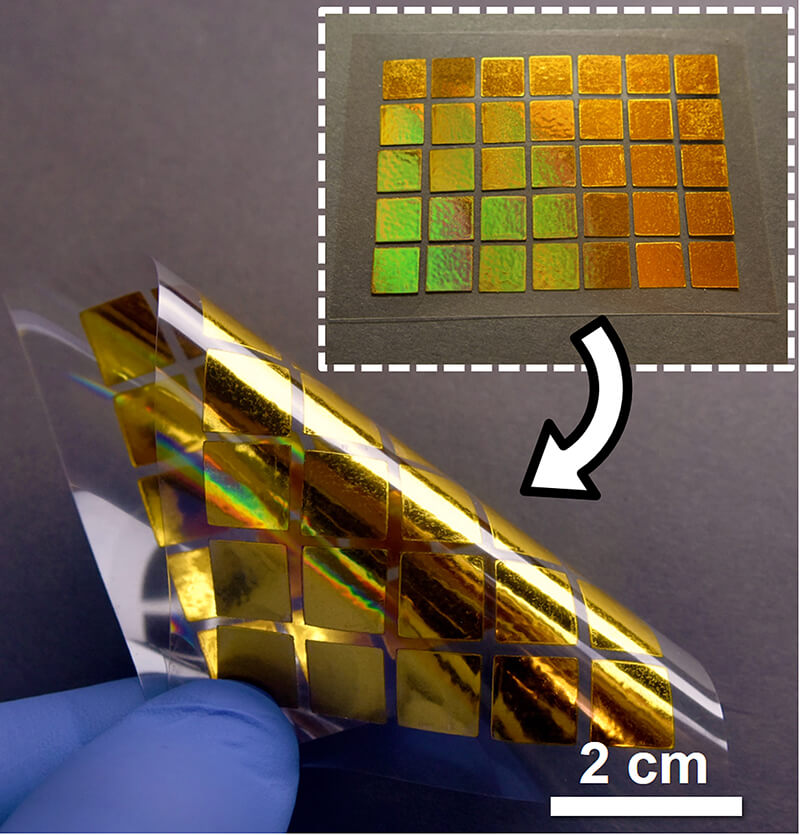 Future ultrafast devices also will require much smaller metal components, which calls for a higher resolution to make them at these nanoscale sizes.

"Forming metals with increasingly smaller shapes requires molds with higher and higher definition, until you reach the nanoscale size," Martinez said. "Adding the latest advances in nanotechnology requires us to pattern metals in sizes that are even smaller than the grains they are made of. It's like making a sand castle smaller than a grain of sand."

This so-called "formability limit" hampers the ability to manufacture materials with nanoscale resolution at high speed.

Purdue researchers have addressed both of these issues – roughness and low resolution – with a new large-scale fabrication method that enables the forming of smooth metallic circuits at the nanoscale using conventional carbon dioxide lasers, which are already common for industrial cutting and engraving.

"Printing tiny metal components like newspapers makes them much smoother. This allows an electric current to travel better with less risk of overheating," Martinez said.

The fabrication method, called roll-to-roll laser-induced superplasticity, uses a rolling stamp like the ones used to print newspapers at high speed. The technique can induce, for a brief period of time, "superelastic" behavior to different metals by applying high-energy laser shots, which enables the metal to flow into the nanoscale features of the rolling stamp – circumventing the formability limit.

"In the future, the roll-to-roll fabrication of devices using our technique could enable the creation of touch screens covered with nanostructures capable of interacting with light and generating 3D images, as well as the cost-effective fabrication of more sensitive biosensors," Martinez said.

The researchers discuss their technology further in Nano Letters, an American Chemical Society publication. The work is financially supported by Purdue University; the Ross Fellowship program at Purdue; the Administrative Department of Science, Technology and Innovation of Colombia (Grant 567-2012); and Procter & Gamble (Grant 209621).

This Letter describes a low-cost, scalable nanomanufacturing process that enables the continuous forming of thin metallic layers with nanoscale accuracy using roll-to-roll, laser-induced superplasticity (R2RLIS). R2RLIS uses a laser shock to induce the ultrahigh-strain-rate deformation of metallic films at room temperature into low-cost polymeric nanomolds, independently of the original grain size of the metal. This simple and inexpensive nanoforming method does not require access to cleanrooms and associated facilities, and can be easily implemented on conventional CO2 lasers, enabling laser systems commonly used for rapid prototyping or industrial cutting and engraving to fabricate uniform and three-dimensional crystalline metallic nanostructures over large areas. Tuning the laser power during the R2RLIS process enables the control of the aspect ratio and the mechanical and optical properties of the fabricated nanostructures. This roll-to-roll technique successfully fabricates mechanically strengthened gold plasmonic nanostructures with aspect ratios as high as 5 that exhibit high oxidation resistance and strong optical field enhancements. The CO2 laser used in R2RLIS can also integrate the fabricated nanostructures on transparent flexible substrates with robust interfacial contact. The ability to fabricate ultrasmooth metallic nanostructures using roll-to-roll manufacturing enables the large scale production, at a relatively low-cost, of flexible plasmonic devices toward emerging applications.