WEST LAFAYETTE, Ind. — For many children, taking a day trip to a zoo or museum was not complete until an oval-shaped coin pressed with a zoo animal or dinosaur was created, commemorating the great times they had.

Purdue University’s EPICS team is bringing this memorable experience to Boilermakers with their own version of a penny press in honor of Purdue’s Sesquicentennial, 150 Years of Giant Leaps celebration. The penny press was unveiled prior to the Homecoming football game, and now will permanently reside in the atrium of the Neil Armstrong Hall of Engineering. A YouTube video is available at https://youtu.be/KqnlYxEtWBI. 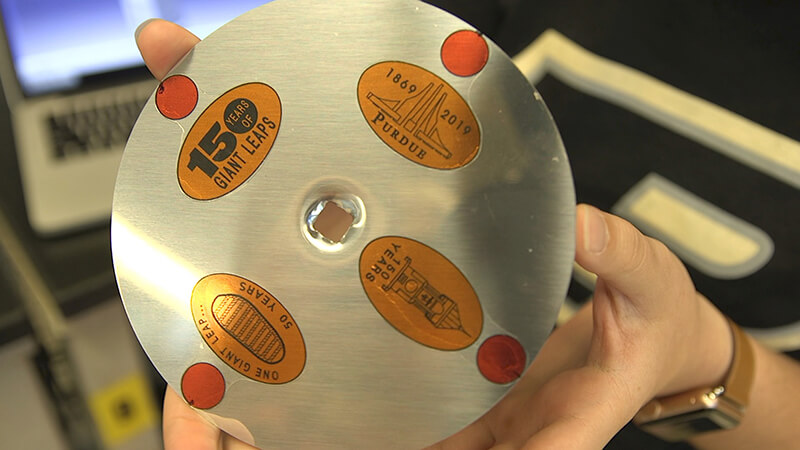 The public can choose from four sesquicentennial designs when they get their pennies pressed from an iconic bell tower machine built by Purdue students. (Purdue University image/Sedona Carey) Download image

This is one of many elements celebrating Purdue’s Sesquicentennial, 150 Years of Giant Leaps. This yearlong celebration is highlighting Purdue’s remarkable history of giant leaps, while focusing on what giant leaps Purdue can take to address the world’s problems.

“The big thing is you get to take something back with you. It’s something physical, but it’s not too big and it’s not too little. It’s just a penny,” said Sedona Carey, design lead on the project and a senior in multidisciplinary engineering. “Hopefully it’s something you could carry in your pocket or display on a shelf and just be that little reminder of Purdue.”

EPICS (Engineering Projects in Community Service) is a service-learning design program within the College of Engineering that uses innovated technologies to solve engineering-based problems for community organizations. The group has been working on this project for a year now, and although they are not working with an outside partner, Carey said this project is very important to EPICS. 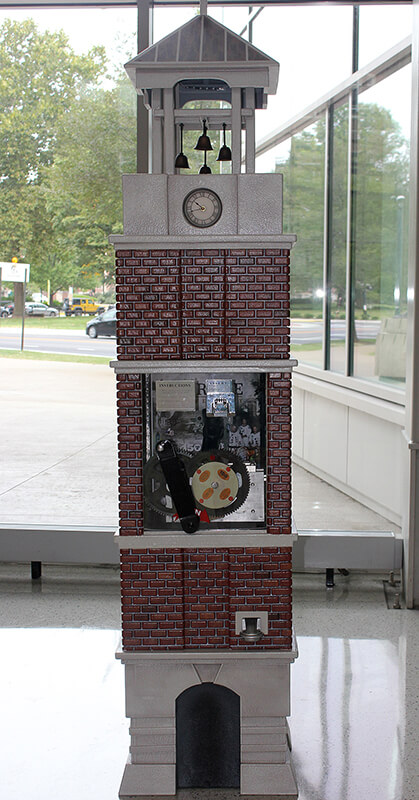 “There are a lot of people that we’re touching through this project besides students,” Carey said. “I think it means a lot for the people who come back and visit Purdue. The alumni that come back every year or every 20 years get to see that and get to take a part back with them.”

The 8-foot-6-inch penny press has four iconic designs chosen by Purdue students, but it will do more than just press pennies. The press has LED lights to mimic the lights on the Bell Tower, archived pictures of the university and audio including the Purdue fight song and Neil Armstrong’s moon landing quote.

“It’s all controlled by whenever a penny is rolling past the sensors. The penny not only controls sound but the lights and other cool effects,” said Matt Fitzgerald, co-project manager for the project and a junior in systems analysis and design.

Carey hopes that this project makes an impact on students, visitors and alumni.

Note to Journalists: A YouTube video is available at https://youtu.be/KqnlYxEtWBI and other multimedia can be found in a Google Drive folder at http://bit.ly/2NtPUJw. The materials were prepared by Erin Easterling, digital producer for the Purdue College of Engineering, 765-496-3388, easterling@purdue.edu