WEST LAFAYETTE, Ind. – Purdue University researchers are looking at a new way to alert walkers distracted while using their smartphones about oncoming vehicles as a method to lower pedestrian deaths, which have hit a three-decade high in the United States.

The Governors Highway Safety Association reports that 5,984 pedestrians were killed in 2017, a 33-year high, while other kinds of traffic deaths have decreased.

“This is a growing problem in the United States with more pedestrians and drivers distracted by their phones,” said He Wang, an assistant professor in the Purdue Department of Computer Science, who created the technology along with his Ph.D. student, Siyuan Cao. “Now, we have created an innovative system to use those same phones to help save lives.”

The Purdue team developed a system called PHADE, which allows surveillance or other cameras in public to send an alert directly to a smartphone.

The technology will be presented during the UbiComp conference in October in Singapore. A video explaining more about the camera technology is available at https://bit.ly/2JScSqO. 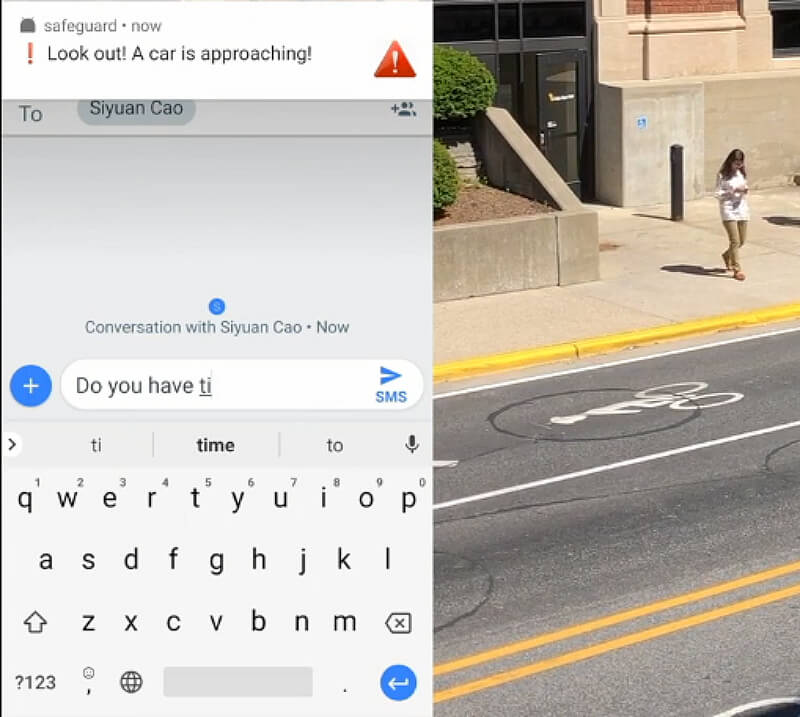 Purdue University researchers developed a system for surveillance or other cameras in public to send an alert directly to a smartphone. (Image provided) Download image

Although traditional data transmission protocols need to first learn the destination’s IP or MAC address, this system uses motion patterns as the address code for communication. The smartphones then locally make their own decisions on whether to accept a message.

“This system basically allows surveillance cameras to talk to the public through their individual phones,” Cao said. “The camera can send an almost instant alert to a pedestrian that a car is coming.”

The pedestrian would receive a message to their phone that reads: Danger! Oncoming vehicle.

The PHADE system works using a server to receive video streams from cameras to track people. The camera builds a packet by linking a message to the address code and broadcasts the packet.

“Our technology serves as a bridge to connect cameras and people,” Wang said. “Surveillance cameras are widely deployed today and human and artificial intelligence systems can retrieve numerous bits of information from the video feeds of these cameras. Our innovation turns that information into life-saving applications.”

Cao said surveillance camera and security companies would also be able to integrate the technology into their products directly as a key feature. The technology also can be used in shopping malls, museums and other locations to send personalized messages to people without compromising their privacy.

The technology aligns with Purdue's Giant Leaps celebration of the university’s global advancements made in health, space, artificial intelligence and sustainability as part of Purdue’s 150th anniversary. Those are the four themes of the yearlong celebration’s Ideas Festival, designed to showcase Purdue as an intellectual center solving real-world issues. Such solutions, including smart technology is a focus of Purdue’s Discovery Park District.

The Purdue Office of Technology Commercialization helped file patent applications for the technology and is seeking partners to license it.