An online tool to save your life? Purdue develops platform to help survive hurricanes, natural disasters

WEST LAFAYETTE — Just a few minutes of warning during a natural disaster can mean the difference between life and death.

Imagine being stuck underneath rubble after a hurricane slams landward, knocking out the emergency phone lines. What if social media could save your life? What if an online platform gave you a more accurate, detailed route of a hurricane?

As Hurricane Florence continues a fierce push to the East Coast, Purdue University researchers are testing technology to help find victims of natural and man-made disasters. 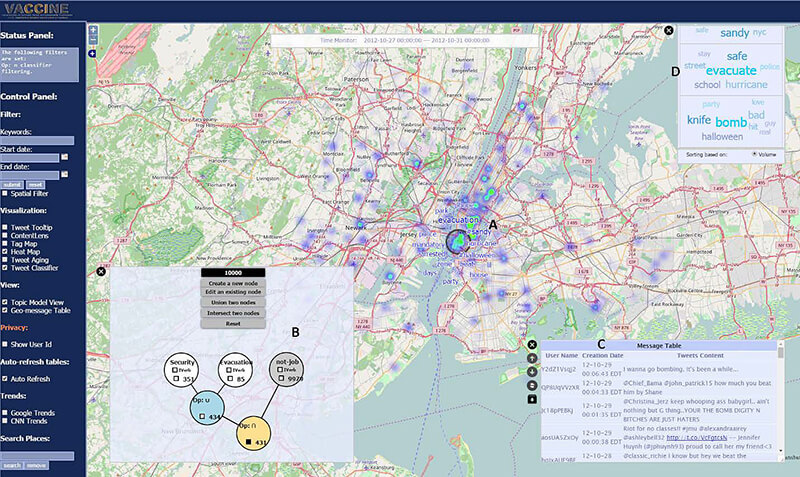 “SMART distills the ocean of social media data down to relevant and usable information in real time,” said David Ebert, director of Purdue’s Visual Analytics for Command, Control and Interoperability Environments and the Silicon Valley Professor of Electrical and Computer Engineering. “What an incredible opportunity to use our engineering talents at Purdue to make a life-saving impact.”

Although the system has not been released publicly, official first-responder organizations can request an account to use SMART during Hurricane Florence by contacting Ebert at ebertd@ecn.purdue.edu.

A video explaining how the platform works is at http://bit.ly/Purdue-SMART.

First responders can use SMART to select key words and themes, such as flooding or medical emergencies, which are then visually displayed and highlighted on a map as they are talked about on social media within a specific geographic area.

“Imagine being trapped after a hurricane makes landfall and having social media as the only form of communication to reach out for help,” Ebert said. “SMART allows first responders to pick up those digital cries for help and take action.”

Purdue’s technology also allows users to set up customizable email alerts for relevant key words within a specified time frame. Officials in California were trained to use SMART to find victims of this year’s wildfires.

“There is really no learning curve because the interface is visual and natural,” Ebert said.

The team worked with the Purdue Office of Technology Commercialization to patent its work. The team is looking to license or sell the technology.