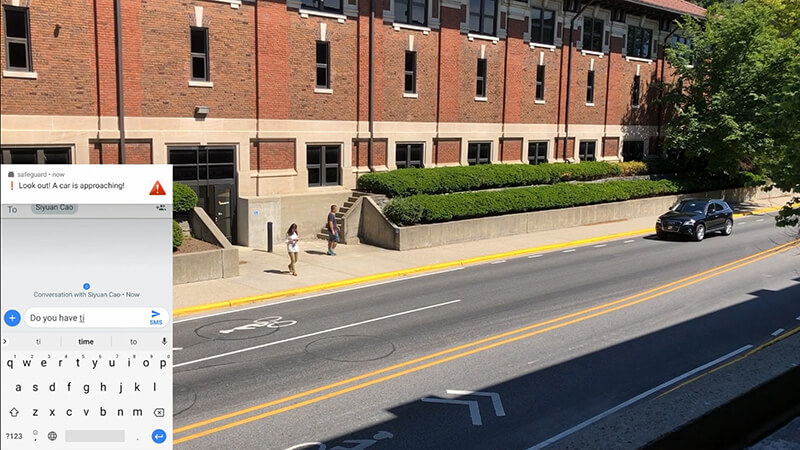 City governments will be able to use the Purdue University public camera technology to send alerts to distracted pedestrians when cars are approaching. (Image provided)

The team developed a real-time end-to-end system called PHADE to allow this process, known as private human addressing. While traditional data transmission protocols need to first learn the destination’s IP or MAC address, this system uses motion patterns as the address code for communication. The smartphones then locally make their own decisions on whether to accept a message.

A video explaining more about the camera technology is available at https://bit.ly/2JScSqO.

“Our technology enables public cameras to send customized messages to targets without any prior registration,” said He Wang, an assistant professor in the Purdue Department of Computer Science, who created the technology along with his PhD student, Siyuan Cao. “Our system serves as a bridge to connect surveillance cameras and people and protects targets’ privacy.”

PHADE protects privacy in two key ways – it keeps the users’ personal sensing data within their smartphones and it transforms the raw features of the data to blur partial details. The creators named the system PHADE because the blurring process “fades” people’s motion details out.

PHADE can be used in places such as at a museum, where visitors can receive messages with information about the artifacts or exhibits they are viewing. The technology also could be implemented in shopping malls to provide consumers with digital product information or coupons. In a similar way, PHADE could be valuable for new store prototypes such as Amazon Go, which uses phone technology instead of traditional checkout registers.

“PHADE may also be used by government agencies to enhance public safety,” Cao said. “For example, the government can deploy cameras in high-crime or high-accident areas and warn specific users about potential threats, such as suspicious followers.”

Wang said surveillance camera and security companies would also be able to integrate the technology into their products directly as a key feature. He also said this technology has advantages over Bluetooth-based beacons, which have difficulties in adjusting for ranges of transmission and do not allow for context-aware messaging.

The work appears in the June issue of Interactive, Mobile, Wearable and Ubiquitous Technologies (IMWUT), a premier journal for research relevant to the post-PC era, and will be presented during a conference in October in Singapore.

The Purdue Office of Technology Commercialization helped file patent applications for the technology and is seeking partners to license it.