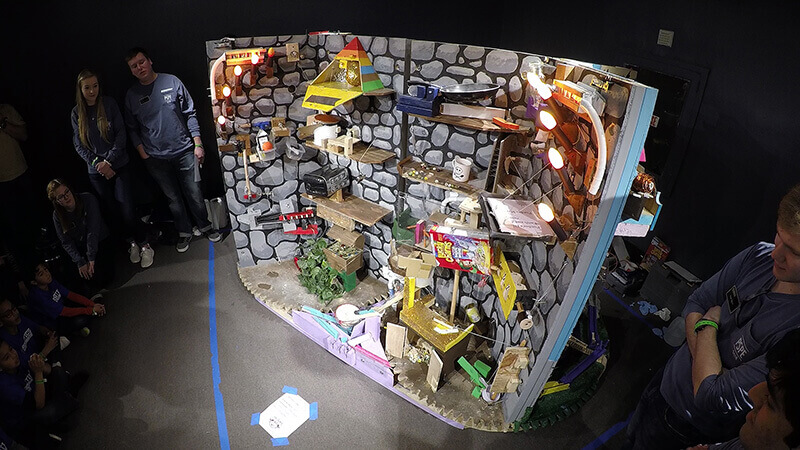 Members of the Purdue Society of Professional Engineers stand next to their entry in the 2018 Rube Goldberg Machine Contest college division at Chicago’s Museum of Science and Industry. (Photo/Jared Pike)

The nationwide competition, which originated at Purdue 30 years ago, involved building a machine to do the simplest task in the most complicated and whimsical manner. This year’s task was to pour a bowl of cereal.

The PSPE team invested 3,300 hours to build a machine with a medieval magic and fantasy theme, culminating with a box of Lucky Charms being poured into a bowl. In a unique twist, the machine consisted of three separate vignettes, each of which rotated into view when the previous steps were complete.

A video of the winning entry, go to https://www.youtube.com/watch?v=zPVH2admAuw.

Other Purdue teams also won awards. The Purdue chapter of the American Society of Mechanical Engineers (ASME) received third place in the college division, with a spy-themed machine. Members of Purdue’s Association of Mechanical and Electrical Technologists (AMET) won a special award from the event’s sponsor, General Mills, for the most innovative final step of pouring the bowl of cereal. AMET students created a primitive hydraulic arm out of wood and syringes, which lifted and turned a Cheerios box.

The Rube Goldberg Machine Contest originated at Purdue University in the 1950s, between rival engineering fraternities. It came to national prominence in the 1980s, when other universities were invited to Purdue to join the competition. Now in its 30th year, the Rube Goldberg Machine Contest includes hundreds of schools across the country, and students from age 8 to college-age.