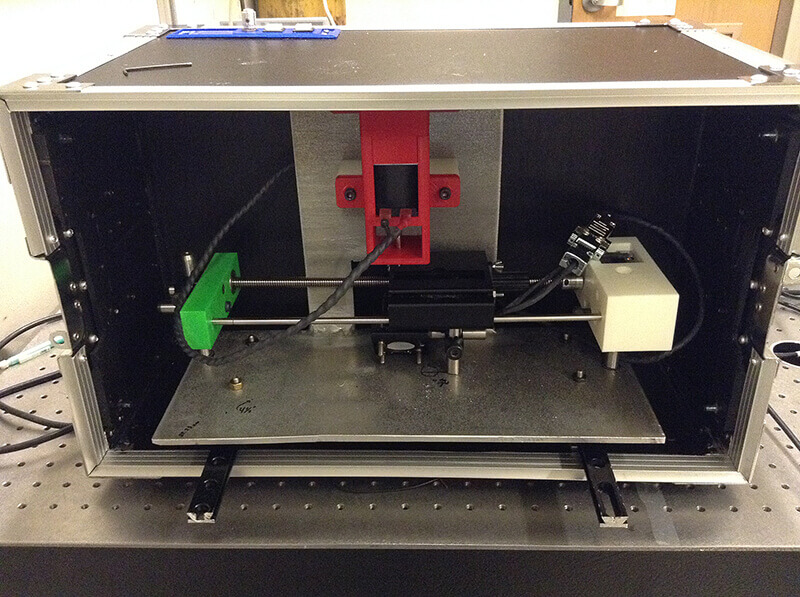 The front side of an instrument developed by Purdue University researchers to crush pharmaceutical formulations to determine if they have trace crystallinity, which can negatively impact the drug’s stability and bioavailability. The red plastic holds a solenoid that strikes the formulation. A motor moves the microscope slide down the line. A photo multiplier tube beneath the slide measures the optical radiation resulting from the triboluminescence of the compound. (Image provided)

WEST LAFAYETTE, Ind. – Researchers at Purdue University have created a device that can quickly and inexpensively determine whether new pharmaceutical formulations have trace crystallinity that can negatively impact the drug’s stability and bioavailability.

The researchers have developed instrumentation that can accurately detect in early stages whether a pharmaceutical formulation has trace crystalline content. The instrument is based off of triboluminescence and works by measuring light emitted when a pharmaceutical powder is crushed.

“Any light that is measured is directly proportional to how much crystallinity is in the formulation,” said Casey Smith, a graduate student in Purdue's Department of Chemistry.

The solid form of an active pharmaceutical ingredient can profoundly influence the proportion of that drug that can enter the body and have an effect. Many new drug candidates have low aqueous solubility, which leads to a lower bioavailability. If a drug doesn’t dissolve in a timely manner, it can pass through a body before it has had time to take effect. One method to overcome this problem is to put the drug into an amorphous state, or cast into a polymer matrix that readily dissolves in water.

“New drugs that are coming out are increasingly larger and more hydrophobic, or do not dissolve easily in water,” said Garth Simpson, a Purdue chemistry professor. “If crystallinity is detected, there's a good chance that it won't dissolve in a time frame required to be bioavailable and efficacious.”

The instrument was created in collaboration with the Department of Chemistry’s Jonathan Amy Instrumentation Facility. It is an electro-mechanical device that uses a solenoid to strike powder on a microscope slide. A photo multiplier tube beneath the slide measures the optical radiation resulting from the triboluminescence of the compound. The light isn’t visible to the naked eye. A motor moves the microscope slide down the line to probe a new area of the powder. The researchers obtained a provisional patent on the device with the help of Purdue’s Office of Technology Commercialization.

“This technique would be more like a prescreen off an assembly line in a factory where they’re making these drugs. They can send a small amount of the material into this instrument for triboluminescence measurements. If they get a positive outcome from the sample, then they can send it off for more rigorous testing,” said Scott Griffin, a Purdue chemistry graduate student.

Griffin and Smith, both students in Simpson’s lab, were the lead authors in a paper on triboluminescence published in the peer-reviewed journal Analytical Chemistry that included researchers from Merck & Co.

There are other ways to determine crystallinity, including a second harmonic generation process that uses a femtosecond pulsed laser that also was developed in Simpson’s lab. But the triboluminescence instrument is much simpler. 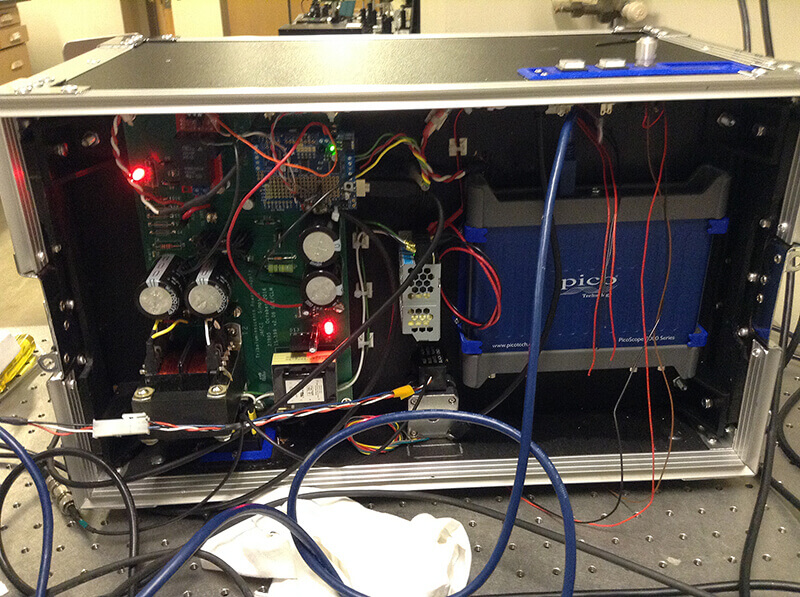 The back side of an instrument created by Purdue University researchers to determine if pharmaceutical formulations have trace crystallinity. The main circuit board that controls the instrument consists of a high-power voltage regulator to power the striking solenoid. The instrument was created in collaboration with the Department of Chemistry’s Jonathan Amy Instrumentation Facility. Image provided) Download image

“It boils down to the earliest time point which crystallinity can be detected,” Simpson said. “We wanted to have something that would be a simple yes or no assessment that could be done on site. If something fails, it can be taken to a more advanced instrument to get a better sense of quantitative characterization.”

Simpson said a triboluminescence instrument also could be used to determine quickly whether changes in the way a drug is produced causes crystallinity.

There is still work to be done, Simpson said. The researchers want to be able to do similar crystallinity testing in slurries and are working on a flow cell to accomplish that.

“So for a lot of these drug cocktails, when you put it into water it starts out in an amorphous state but can spontaneously crystallize. We want tools that can characterize and measure that process,” he said.

The researchers also are trying to get a sense for what fraction of drug molecules and drug compounds are likely to be amenable to triboluminescence analysis.

The initial work on the said triboluminescence instrument was funded through a National Science Foundation grant. The Purdue Research Foundation provided funding for the initial prototype and Merck has helped fund the more recent work.

The triboluminescence instrument is available for licensing from the Office of Technology and Commercialization.