WEST LAFAYETTE, Ind. - Parents often use tickling as a playful way to lighten a child’s mood. In Brianna Gaskill’s Purdue University lab, scientists do the same thing, only with rats.

Gaskill, an assistant professor in the Department of Animal Sciences and a member of Purdue’s Center for Animal Welfare Science, champions so-called rat “tickling” as a way to improve the quality of life for laboratory rats. Making brisk dorsal contact around the animal’s shoulder blades with their fingertips, and then flipping the rat over and pinning it, researchers simulate the way rats play with each other. While it’s not technically tickling, the quick finger movements look similar.

“The movements do look like tickling, but we’re mimicking social play. You’re not actually tickling them like you would a little kid,” Gaskill said. “We want to get lab animal personnel to create a lower-stress environment and for the rats to express more positive emotions, especially when handled by humans. These tickling techniques accomplish that, if done correctly.”

Gaskill, Megan LaFollette, a graduate student in Gaskill’s lab, and colleagues describe the proper techniques for rat tickling in a paper published in the Journal of Visualized Experiments. They argue that rats used for research in laboratories or kept as pets can show physiological and behavioral signs of physical and emotional stress. That can lead to difficulty handling the rats, reduced rat well-being and potentially inaccurate research results. 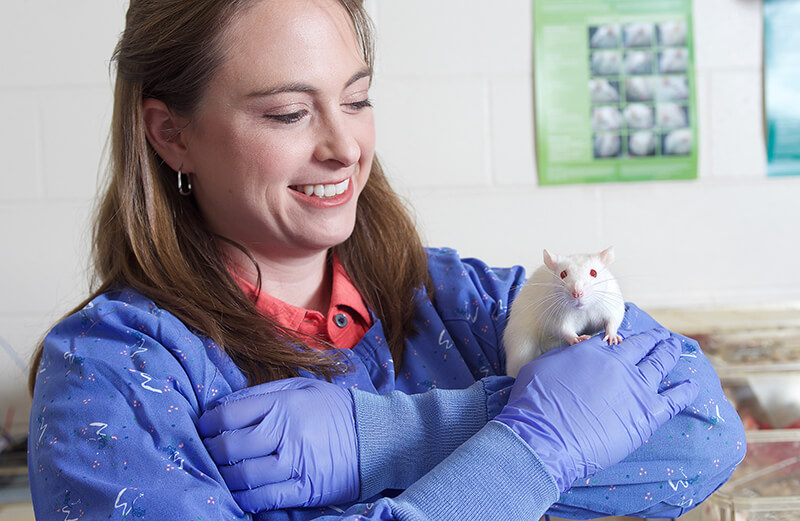 Researchers can measure the pleasure tickling derives through monitored behavior, but also through ultrasonic vocalizations rats make that can only be heard with sensitive audio equipment. Rats making 22-kHz sounds are stressed or fearful and often make the sounds when exposed to predators, experiencing pain and during fights. Improper handling techniques can also lead to these negative vocalizations.

But rats making 50-kHz sounds are happy. They emit these sounds when playing with each other, when given treats and when engaged in proper tickling.

Proper techniques, described in Gaskill and LaFollette’s findings, include preparing the rat’s home or cage by using appropriate bedding and removing obstacles for safe play; moving one hand confidently and briskly during flips and pins; and tickling in bouts of 15 seconds at a time.

“We want people to use it, but we want them to use it the right way,” Gaskill said. “If you’re working with rats, this is something you can do to reduce stress. But improper technique can have the opposite effect, increasing fear and stress.”

Proper tickling has been shown to make handling of rats easier, improve how quickly rats approach a human and increase positive vocalizations, as described in another paper by LaFollette and Gaskill. Tickled rats that are given injections for research purposes make fewer negative audible noises and more positive ultrasonic vocalizations before and after injections.

In another tickling research project, LaFollette tested tickling on pet-store rats. Some rats received no tickling, while the tickled rats were divided into two groups based on how many positive vocalizations were made during tickling.

All rats that were tickled were easier to restrain and spent more time outside their huts than the control rats. Only the rats that made fewer positive vocalizations during tickling – possibly a sign that these rats have higher general anxiety and depression – showed more fear and anxiety than the controls.

The results suggest that tickling can be used as a method to determine which rats might make better pets and to improve socialization of all rats before they’re sold to new owners.

“Pet rats will interact with humans even longer than those kept in labs,” said LaFollette, whose findings were published in Applied Animal Behaviour Science. “This gets us a step closer to improving the welfare of these rats.”

A video of Brianna Gaskill discussing her research into rat “tickling” can be found at https://youtu.be/cjhiKvE3g4Y​

NOTE TO ONLINE EDITORS: A link to a video clip of Brianna Gaskill discussing her research into rat “tickling” is at the bottom of this release. The video can be embedded in your website.

Tickling, a Technique for Inducing Positive Affect When Handling Rats

1.     Center for the Study of Animal Well-being, Department of Integrative Physiology and Neuroscience, Washington State University

Handling small animals such as rats can lead to several adverse effects. These include the fear of humans, resistance to handling, increased injury risk for both the animals and the hands of their handlers, decreased animal welfare, and less valid research data. To minimize negative effects on experimental results and human-animal relationships, research animals are often habituated to being handled. However, the methods of habituation are highly variable and often of limited effectiveness. More potently, it is possible for humans to mimic aspects of the animals' playful rough-and-tumble behavior during handling. When applied to laboratory rats in a systematic manner, this playful handling, referred to as tickling, consistently gives rise to positive behavioral responses. This article provides a detailed description of a standardized rat tickling technique. This method can contribute to future investigations into positive affective states in animals, make it easier to handle rats for common husbandry activities such as cage changing or medical/research procedures such as injection, and be implemented as a source of social enrichment. It is concluded that this method can be used to efficiently and practicably reduce rats' fearfulness of humans and improve their welfare, as well as reliably model positive affective states.

Across 2 replicates, 36 female rats were sampled with 6 minimally handled controls and 12 tickled rats per replicate. Tickled rats were split into two groups, high-callers (most USVs) and low-callers (least USVs), based on tickling for 3 days (5 min/rat/day). Handling treatments were applied by store employees for 4 additional days.

In conclusion, short-term tickling of pet store rats improves ease of restraint with an unfamiliar handler. In comparison to low-calling rats, high-calling rats show less fear toward unfamiliar humans. Tickled rats had higher arousal levels based on fecal corticosterone, which may relate to their anticipation of interaction with humans. Overall, our results suggest that tickling pet store rats may improve some human-rat interactions, especially for tickled high-calling rats.