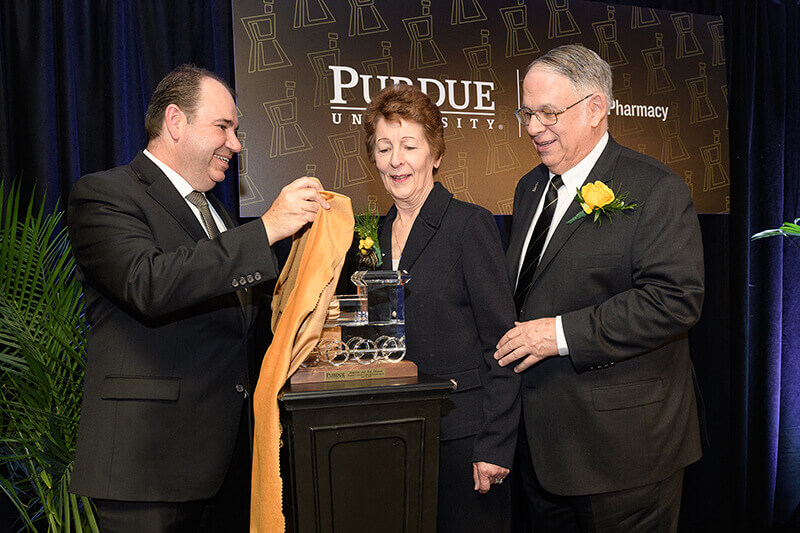 WEST LAFAYETTE, Ind. — A Purdue alumna and her husband have donated an additional $8 million to their Pacesetter Endowment for Pharmacy, which provides student scholarships and ultimately will support renovation, expansion or a new facility for the College of Pharmacy.

Their contribution takes the endowment total to $10 million and was donated as part of “Ever True: The Campaign for Purdue University” and Purdue Day of Giving.

“This gift to the College of Pharmacy is the largest individual gift in the college’s history. It will help lessen student debt, provide updated facilities and drive innovation for years to come,” Purdue President Mitch Daniels said. “We are extremely grateful for the Chaneys’ longtime support of Purdue.”

JeanAnne "Jeannie" D. Chaney, who earned her bachelor's degree in pharmacy from Purdue in 1961, and her husband, James B. Chaney, made the donation through the Chaney Family Foundation. They established the endowment with a $1 million gift in 2014 that has provided scholarships to more than 140 students.

JeanAnne Chaney hopes the most recent gift provides both scholarships and a new facility that can keep Purdue a top destination for pharmacy students.

“I feel that a new pharmacy building is needed at Purdue for this college to graduate top-level students. Since pharmacy is changing rapidly, and for Purdue Pharmacy to remain in the top 10 pharmacy schools in the nation, the new building is needed now,” she said.

The gift also will continue to help provide scholarships for students.

“Scholarships are a major beneficiary of our giving,” Jim Chaney said. “Student debt has gotten to be a big source of student concern. Purdue ranks among the lowest in the Big Ten for the  amount of debt per student upon graduation, and we would like to continue our support for students to lessen their debt.”

Eric Barker, dean of the College of Pharmacy, says the gift helps the college strive for excellence.

"Thanks to the Chaneys’ passion and generosity, the College of Pharmacy will be able to advance key elements that are essential to our vision of being bold leaders, moving together to the highest level of excellence,” he said. “This new gift will have a transformative impact on the college, both in the near and long term, by providing financial support for our students and making a Purdue pharmacy education more affordable. It will ultimately enhance our facilities, further allowing us to be successful in recruiting the very best students and faculty to the Purdue College of Pharmacy."

The couple was recognized for their philanthropy with Purdue’s Crystal Boilermaker Special and pharmacy’s Friends of Pharmacy award. The Chaneys also are recipients of the President's Council Pinnacle Award, the highest recognition for philanthropic contributions to Purdue.

Jim Chaney is president of the Cleveland Syrup Co., which provides sweeteners to food manufacturing companies. He earned his bachelor's degree in economics from Denison University.