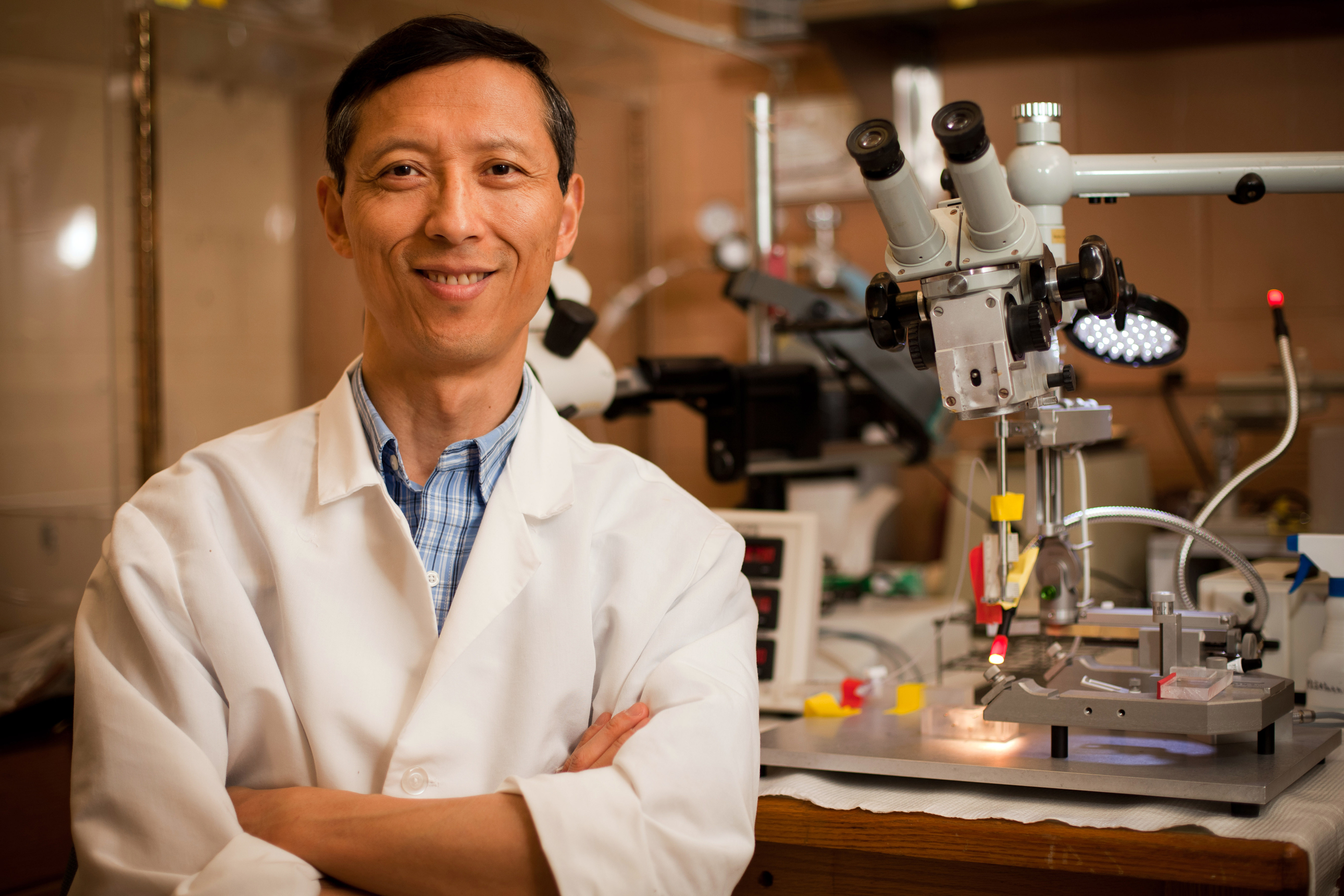 A potential new drug therapy for spinal cord injuries has been identified by researchers at Purdue University. The drug was identified by Riyi Shi, professor in the Department of Basic Medical Sciences, College of Veterinary Medicine and Weldon School of Biomedical Engineering. The drug works in a similar way as a drug previously developed at Purdue, 4-aminopyridine, which has been approved by the U.S. Food and Drug Administration to treat multiple sclerosis. (Purdue University photo)

WEST LAFAYETTE, Ind. — An experimental drug has shown promise as a potential therapy for spinal cord injuries in animal studies.

The compound, 4-aminopyridine-3-methanol, works in a similar way as a drug previously developed at Purdue, 4-aminopyridine (4-AP), which has been approved by the U.S. Food and Drug Administration to treat multiple sclerosis.

Dr. Riyi Shi, professor in the Department of Basic Medical Sciences, College of Veterinary Medicine and Weldon School of Biomedical Engineering, who was involved in the development of both drugs, compared the two compounds in both cell cultures and animal models.

"For the first time, 4-aminopyridine-3-methanol is shown to restore function in chronic spinal cord injuries," he says. "It also reduces neuropathic pain to a greater degree than 4-AP.

"Because persistent chronic pain is a serious problem among patients with spinal cord injuries, 4-aminopyridine-3-methanol could potentially be used to reduce pain, independent of any motor benefits."

Shi says an advantage of this drug is its broad therapeutic dosing range. "The minimum effective dose can be as low as 10 times less than 4-AP, but it can also be applied at a level that is five times as high."

In spinal injuries even if the nerve fibers of the spinal cord itself, the axons, are intact, function can still be lost if there is damage to the fatty coating on the outside of nerve fibers, which is called the myelin sheath. When the myelin sheath is damaged, potassium channels underneath the coating open, disrupting the electrical signal. Both drugs work by closing these channels to restore the conduction of the axons.

"We are very encouraged by this preclinical study because about 10 years ago 4-AP, which is marketed as fampridine, dalfampridine, or Ampyra, was approved for MS, and both spinal cord injuries and MS share a similar mechanism of nerve signal conduction loss; they both could be caused by myelin damage," Shi says. "The drug was approved for MS but not approved for spinal cord injuries because of concerns about potential toxicity and a narrow therapeutic dose range. So there is a big need for a better channel blocker."

Shi and his team found that 4-aminopyridine-3-methanol is safer, more effective at closing the potassium channels — at least 50 percent more effective — and also much longer lasting.

Shi is the co-founder of Neuro Vigor, a startup company with business interests of developing effective therapies for central nervous system neurodegenerative diseases and trauma.

Myelin damage is a hallmark of spinal cord injury (SCI), and potassium channel blocker (PCB) is proven effective to restore axonal conduction and regain neurological function. Aiming to improve this therapy beyond the U.S. Food and Drug Administration–approved 4-aminopyridine (4-AP), we have developed multiple new PCBs, with 4-aminopyridine-3- methanol (4-AP-3-MeOH) being the most potent and effective. The current study evaluated two PCBs, 4-AP-3-MeOH and 4-AP, in parallel in both ex vivo and in vivo rat mechanical SCI models. Specifically, 4-AP-3-MeOH induced significantly greater augmentation of axonal conduction than 4-AP in both acute and chronic injury. 4-AP-3-MeOH had no negative influence on the electrical responsiveness of rescued axons whereas 4-AP-recruited axons displayed a reduced ability to follow multiple stimuli. In addition, 4-AP-3-MeOH can be applied intraperitoneally at a dose that is at least 5 times higher (5 mg/kg) than that of 4-AP (1 mg/kg) in vivo. Further, 5 mg/kg of 4-AP-3-MeOH significantly improved motor function whereas both 4-AP-3-MeOH (1 and 5 mg/kg) and, to a lesser degree, 4-AP (1 mg/kg) alleviated neuropathic pain-like behavior when applied in rats 2 weeks post-SCI. Based on these and other findings, we conclude that 4-AP-3-MeOH appears to be more advantageous over 4-AP in restoring axonal conduction because of the combination of its higher efficacy in enhancing the amplitude of compound action potential, lesser negative effect on axonal responsiveness to multiple stimuli, and wider therapeutic range in both ex vivo and in vivo application. As a result, 4-AP-3-MeOH has emerged as a strong alternative to 4-AP that can complement the effectiveness, and even partially overcome the short- comings, of 4-AP in the treatment of neurotrauma and degenerative diseases where myelin damage is implicated.