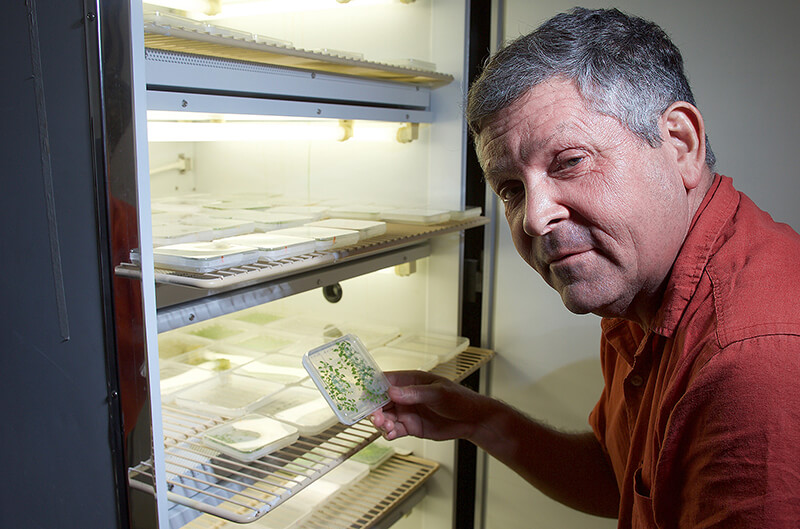 WEST LAFAYETTE, Ind. – Purdue University scientists have discovered evidence that the repressive structures that plants use to keep genes turned off is built with a potential self-destruct switch. The findings offer insight into ways to control gene expression to alter plants’ characteristics.

Joe Ogas, associate professor and associate head of Purdue’s Department of Biochemistry, led the study, which included scientists from Purdue, the Shanghai Center for Plant Stress Biology, and Emory University. Their findings were published in the journal The Plant Cell.

A number of labs have previously shown that plants can create a repressive state by placing an epigenetic mark on chromatin, the material used to create chromosomes. Proteins meant to transcribe, or turn on, genes ignore those genes with the epigenetic mark.

“That histone variant and the epigenetic mark are both components of a lock that keeps a gene turned off. The inclusion of H2A.Z is interesting, however, because it’s potentially easier for the plant to blow up that lock,” Ogas said. “This isn't something we typically see in animals. Our data indicate that this combination is prevalent in plants and may contribute to a more dynamic expression state for the gene, potentially enabling rapid change."

Other proteins may recognize the H2A.Z histone and alter the properties of chromatin containing this variant. Ogas said that essentially takes the legs out from under H3K27me3, removing the mark and allowing the gene to be transcribed.

“This isn’t the only way that genes are turned on or off, but understanding this relationship between H2A.Z and H3K27me3 is likely to shed light on the mechanism of repression of many genes important to plant development,” said Ogas, whose work was done on the model plant Arabidopsis thaliana.

The findings are important for plant scientists and breeders who want to manipulate genetic expression in plants. For example, oil in soybeans is created only in the seeds, but it might be desirable to remove the epigenetic mark to allow for oil creation in other parts of the plant or in other types of plants.

“The inclusion of H2A.Z in this type of chromatin may contribute to the observed developmental flexibility of plants,” Ogas said. “If you’re going to build a stable expression state, it suggests constraints you need to take into consideration.”

Selective, tissue-specific gene expression is facilitated by the epigenetic modification H3K27me3 (trimethylation of lysine 27 on histone H3) in plants and animals. Much remains to be learned about how H3K27me3-enriched chromatin states are constructed and maintained. Here we identify a genetic interaction in Arabidopsis thaliana between the chromodomain helicase DNA-binding chromatin remodeler PICKLE (PKL), which promotes H3K27me3 enrichment, and the SWR1-family remodeler PHOTOPERIOD INDEPENDENT EARLY FLOWERING 1 (PIE1), which incorporates the histone variant H2A.Z. Chromatin immunoprecipitation-sequencing and RNA-sequencing reveal that PKL, PIE1, and the H3K27 methyltransferase CURLY LEAF act in a common gene expression pathway and are required for H3K27me3 levels genome-wide. Additionally, H3K27me3-enriched genes are largely a subset of H2A.Z-enriched genes, further supporting the functional linkage between these marks. We also found that recombinant PKL acts as a prenucleosome maturation factor, indicating that it promotes retention of H3K27me3. These data support the existence of an epigenetic pathway in which PIE1 promotes H2A.Z, which in turn promotes H3K27me3 deposition. After deposition, PKL promotes retention of H3K27me3 after DNA replication and/or transcription. Our analyses thus reveal roles for H2A.Z and ATP-dependent remodelers in construction and maintenance of H3K27me3-enriched chromatin in plants.