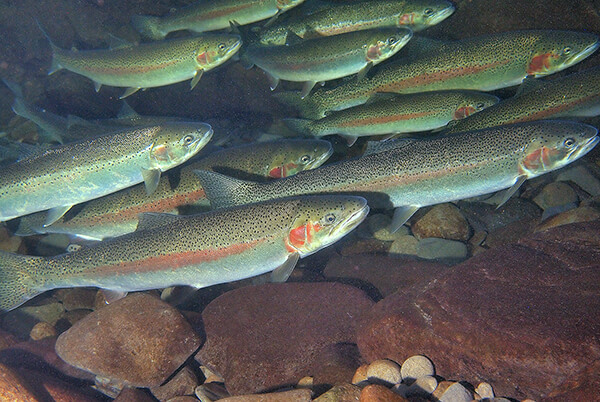 Steelhead trout, a member of the salmon family that lives and grows in the Pacific Ocean, genetically adapted to an entirely freshwater environment in 120 years. (Photo via John McMillan) Download image

WEST LAFAYETTE, Ind. — Steelhead trout, a member of the salmon family that live and grow in the Pacific Ocean, genetically adapted to the freshwater environment of Lake Michigan in less than 120 years.

Steelhead were intentionally introduced into Lake Michigan in the late 1800s in order to bolster recreational and commercial fisheries. In their native range, which extends from California to Russia, steelhead hatch in freshwater rivers, migrate to the ocean, and return to freshwater to spawn. This migration allows steelhead to feed in the ocean, where they can grow larger and produce more eggs than if they remained in freshwater streams for their entire lives.

The steelhead introduced into Lake Michigan continue to spawn in small freshwater tributaries and streams, but now treat the entirely freshwater habitat of the Great Lakes as a surrogate ocean. After their introduction into Lake Michigan, steelhead began to naturally reproduce and established self-sustaining populations throughout the Great Lakes. To examine how these fish adapted to this novel environment, a team led by Mark Christie, an assistant professor of biological sciences at Purdue University, sequenced the complete genomes of 264 fish. The team then compared steelhead from Lake Michigan to those from their ancestral range, searching for outlier regions associated with genetic adaptation.

The research, which was published in in the journal Molecular Ecology, found that regions of three chromosomes in steelhead evolved after they were introduced in Lake Michigan, offering insight into how this ocean-migrating fish adapted to an entirely freshwater environment.

Two of the three regions on chromosomes that experienced genetic changes are critical to the process that maintains salt and ion balance across membranes in the body, known as osmoregulation. Freshwater fish actively take in ions from their environments to compensate for salts lost via passive diffusion, while saltwater fish expel ions to compensate for the uptake of salts into their bodies. These changes to regions of chromosomes that affect how this process works help explain how steelhead have survived in an entirely freshwater environment.

The third region that changed is involved in metabolism and wound-healing. This adaptation might have allowed steelhead to take advantage of alternative prey or allocate additional resources to activity in their new environment, according to the study.

Alternatively, this region might have adapted as a response to a novel threat: parasitic sea lamprey. These parasitic creatures were unintentionally introduced to Lake Michigan in the 1930s. They latch onto fish like leeches and leave large wounds, often killing large numbers of the fish they prey on.

“If you think about having an open wound in saltwater versus freshwater, the effects are more severe in freshwater because cells can rupture at a faster rate. It makes sense that steelhead might want to counteract those effects more quickly or do it in different ways,” said Janna Willoughby, a postdoctoral researcher at Purdue and coauthor on the study. “Furthermore, parasitic lamprey occur in really high densities in the Great Lakes but rarely interact with steelhead in their native range - meaning that they may simply be a strong selective force.”

The study also found that genetic diversity was much lower in steelhead in the new environment than fish from their native range. This reduced genetic diversity, sometimes called a founder effect, is common when a new colony is started by only a few members of the original population.

“Even if you have a reduced population due to an introduction event or founder effect, populations still adapt to changing environmental conditions,” said Christie. “Figuring out which populations can adapt and why remains a pressing question, particularly in the face of climate change and other conservation issues.”

Introduced species often colonize regions that have vastly different ecological and environmental conditions than those found in their native range. As such, species introductions can provide a deeper understanding into the process of adaptive evolution. In the 1890s, steelhead trout (Oncorhynchus mykiss) from California were introduced into Lake Michigan (Laurentian Great Lakes, North America) where they established naturally-reproducing populations. In their native range, steelhead hatch in rivers, migrate to the ocean, and return to freshwater to spawn. Steelhead in Lake Michigan continue to swim up rivers to spawn, but now treat the freshwater environment of the Great Lakes as a surrogate ocean. To examine the effects of this introduction, we sequenced the genomes of 264 fish. By comparing steelhead from Lake Michigan to steelhead from their ancestral range, we determined that the introduction led to consistent reductions in genetic diversity across all 29 chromosomes. Despite this reduction in genetic diversity, three chromosomal regions were associated with rapid genetic adaptation to the novel environment. The first region contained functional changes to ceramide kinase, which likely altered metabolic and wound-healing rates in Lake Michigan steelhead. The second and third regions encoded carbonic anhydrases and a solute carrier protein, both of which are critical for osmoregulation, and demonstrate how steelhead physiologically adapted to freshwater. Furthermore, the contemporary release of diverse hatchery strains into the lake increased genetic diversity but reduced the signature of genetic adaptation. This study illustrates that species can rapidly adapt to novel environments despite genome-wide reductions in genetic diversity.