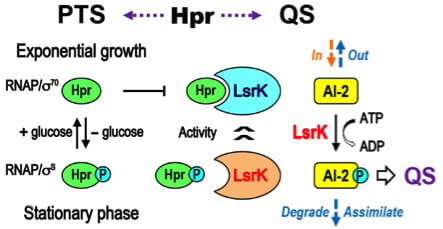 Effective communication between bacteria could depend on the availability of glucose. Download image

Current drugs for bacterial infections aim to kill bacteria in large quantities, but such drugs are often eventually met with antibiotic resistance. Antivirulence and antibiofilm drugs, on the other hand, block toxic molecules produced by bacteria or prevent bacteria from forming thin, slimy films called biofilms (a common example is dental plaque). These mechanisms are controlled by quorum sensing: the process that allows bacteria populations to communicate and coordinate group behavior.

Quorum sensing is facilitated by signaling molecules called autoinducers. One particular autoinducer, AI-2, is modified by a protein called LsrK so that its signal can be perceived.

New research, which appears in the journal Science Advances, shows that LsrK forms a complex with HPr, a protein involved in glucose utilization in E. coli.

“The fact that they are physically connected provides tantalizing evidence that these two very important pathways actually communicate,” said Herman Sintim, a professor of chemistry and researcher in Purdue University’s Institute for Drug Discovery.

“We’ve linked the absence of glucose or related sugars to the shutting down of the quorum sensing process,” said Sintim. “When glucose is low, HPr, which now has a phosphate group, binds LsrK less. The uninhibited LsrK can modify AI-2, which facilitates quorum sensing. This means cooperation between E. coli and related bacteria could depend on the availability of glucose.”

If researchers can find other synthetic molecules that bind LsrK and force it into an inactive state, like HPr does, they could prevent some bacteria from sensing their environment and communicating.

“If bacteria go into an environment and other bacteria are producing the language, they are forced to listen,” Sintim said. “But now it looks like we might be able to close their ears.”

This research was funded by grants from the National Research Foundation of Korea (2016R1A2B4015436), Purdue University and the China Scholarship Council (201406140119), and the US Defense Threat Reduction Agency (HDTRA1-13-0037). Purdue’s Institute for Drug Discovery is housed in Discovery Park.

Quorum sensing (QS), a bacterial process that regulates population-scale behavior, is mediated by small signaling molecules, called autoinducers (AIs) that are secreted and perceived, modulating a “collective” phenotype. Because AI-2 is secreted by diverse species of bacteria, its “perception” keys behavior. This is attributed to the lsr (LuxS regulated) operon that includes AI-2 transporter, LsrACDB and kinase, LsrK. Here, we report that HPr, a phosphocarrier protein central to the sugar phosphotransferase system of Escherichia coli (E. coli), co-purifies with LsrK. Co-crystal structures of an LsrK/HPr complex were determined and the effects of HPr and phosphorylated HPr on LsrK activity were assessed. LsrK activity is inhibited when bound to HPr revealing new linkages between QS activity and sugar metabolism. These help shed new light on the abilities of bacteria to rapidly respond to changing nutrient levels at the population scale. It also suggests new means for manipulating QS activity among bacteria and within various niches.