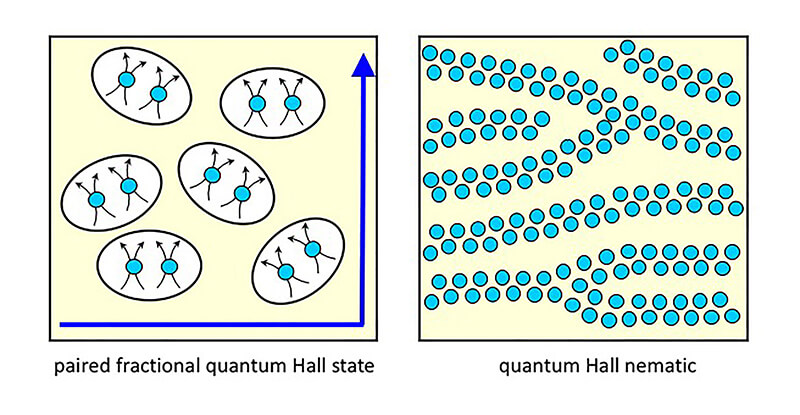 Two different kinds of electron arrangements in a semiconductor, paired as composite particles or lined-up, can interact with and tweak each other in the presence of hydrostatic pressure. (Purdue University image/Gábor Csáthy) Download image

WEST LAFAYETTE, Ind. — The way that electrons paired as composite particles or arranged in lines interact with each other within a semiconductor provides new design opportunities for electronics, according to recent findings in Nature Communications.

What this means for semiconductor components, such as those that send information throughout electronic devices, is not yet clear, but hydrostatic pressure can be used to tune the interaction so that electrons paired as composite particles switch between paired, or "superconductor-like," and lined-up, or "nematic," phases. Forcing these phases to interact also suggests that they can influence each other's properties, like stability – opening up possibilities for manipulation in electronic devices and quantum computing.

"You can literally have hundreds of different phases of electrons organizing themselves in different ways in a semiconductor," said Gábor Csáthy, Purdue professor of physics and astronomy. "We found that two in particular can actually talk to each other in the presence of hydrostatic pressure." 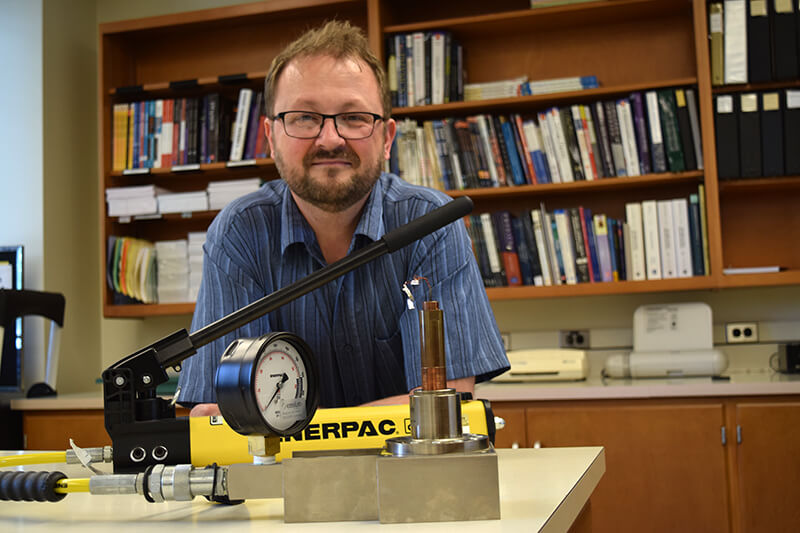 Gábor Csáthy's lab has discovered a new way that electron arrangements could be manipulated within a two-dimensional electron gas of a semiconductor. (Purdue University image/Kayla Wiles) Download image

Csáthy's group discovered that hydrostatic pressure, which is 10,000 times stronger than ambient pressure, compresses the lattice of atoms in a semiconductor and, therefore, influences the electron arrangement within a two-dimensional electron gas hosted by the semiconductor. The strength of the pressure determines which arrangement is favored and tunes the transition between the paired and lined-up phases, making them more tailorable for an application. Of the two phases, the paired phase may support a certain type of quantum computing.

"We can also tune the interaction by engineering the semiconductor," Csáthy said. "Say, for example, we grew a semiconductor with a particular width and electron density that we estimated could stabilize the nematic phase. Then we've tuned the electron-electron interaction as a result."

Michael Manfra, Purdue professor of physics and astronomy, electrical and computer engineering and materials engineering, and researchers Loren Pfeiffer and Kenneth West at Princeton University grew the semiconductor samples for this study. Yuli Lyanda-Geller, Purdue professor of physics and astronomy, provided theoretical support for the understanding on how these electron-electron interactions took place.

This research was supported by the U.S. Department of Energy, the National Science Foundation and various fellowships.

in the Second Landau Level

In spite of its ubiquity in strongly correlated systems, the competition of paired and nematic ground states remains poorly understood. Recently such a competition was reported in the two-dimensional electron gas at filling factor v = 5/2. At this filling factor a pressure-induced quantum phase transition was observed from the paired fractional quantum Hall state to the quantum Hall nematic. Here we show that the pressure induced paired-to-nematic transition also develops at v = 7/2, demonstrating therefore this transition in both spin branches of the second orbital Landau level. However, we find that pressure is not the only parameter controlling this transition. Indeed, ground states consistent with those observed under pressure also develop in a sample measured at ambient pressure, but in which the electron-electron interaction was tuned close to its value at the quantum critical point. Our experiments suggest that electron-electron interactions play a critical role in driving the paired-to-nematic transition.