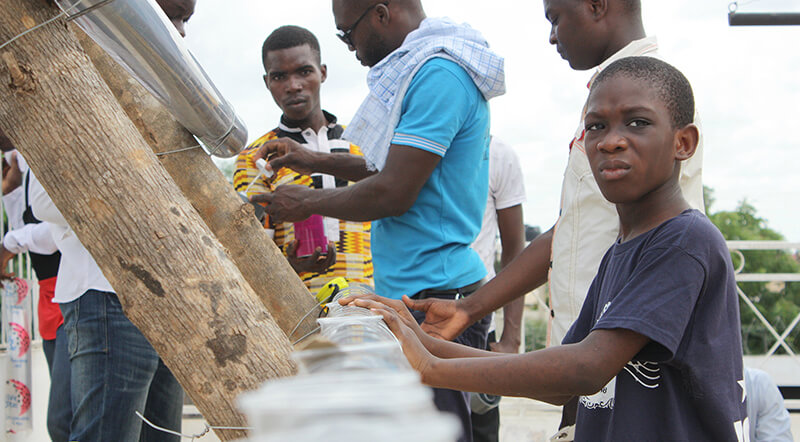 Scott Massey, a Purdue graduate and founder of Heliponix LLC, and Delia Diabangouaya, quality manager of Choco Togo, the first chocolate production facility in Togo, led the workshop on hydroponic systems at the University of Lome in Togo, Diabangouaya’s alma mater.

Togo, a country that has about 7.5 million residents, is one of the world’s poorest countries, with many people surviving on subsistence farming. It has struggled with capital shortages to purchase irrigation equipment and fertilizers, which in turn, reduces the nation's potential yields.

This has created a need for sustainable agricultural methods that will increase yields without requiring extensive capital investments. Diabangouaya and Massey explored ways they could bring hydroponic technologies from the United States to West Africa.

Hydroponics is a method of growing plants in liquids with the use of soil. Most hydroponic systems are indoors in seasonal climates or outdoors in tropical environments, meaning they can grow produce year-round, using 95 percent less water, and can grow produce three times faster without the use of pesticides, if contained.

“I thought it was a great opportunity to share what I know and help the people of Togo,” said Massey, a Purdue University mechanical engineering technology graduate. 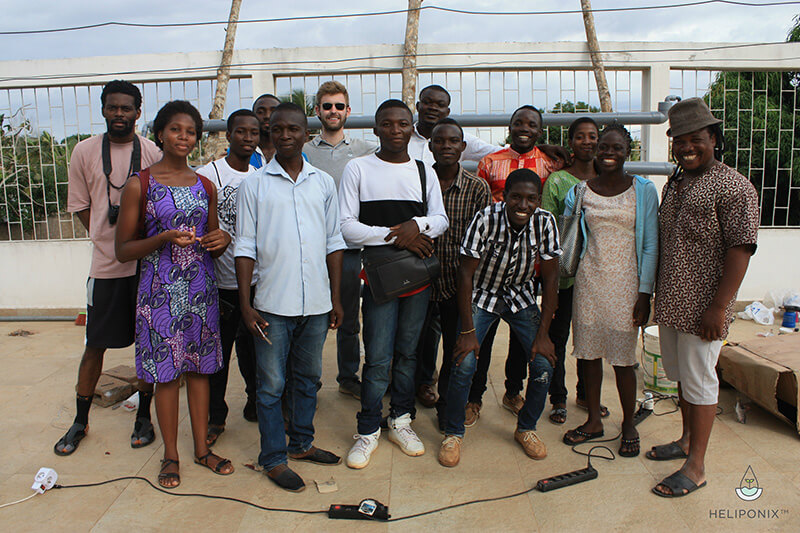 Scott Massey (center, with sunglasses), a founder of Heliponix LLC, poses with residents of Togo who took part in a hands-on workshop on hydroponics in the small West Africa country, where many people survive on subsistence farming. The workshop was funded by the Mandela Washington Fellowship Reciprocal Exchange Component. (Photo provided) Download image

Massey met Diabangouaya while she was at Purdue University for the Mandela Washington Fellowship, a flagship program of the Young African Leaders Initiative (YALI) that empowers young people through academic coursework, leadership training, and networking. They explored ways they could bring hydroponic technologies from the United States to West Africa.

Massey and Diabangouaya sent a proposal to the Mandela Washington Fellowship Reciprocal Exchange Component to hold hydroponic technology lectures and workshop builds on the University of Lome campus for students to bring the technology to their homes. Funds were provided to finance Massey’s travel and to buy materials to build the first Heliponix farms in Africa.

Upon arriving in April, Massey quickly learned the challenge of designing outside of the United States because everything in Togo is in metric. He also had no knowledge of what materials were readily available to the average Togolese person in their marketplaces.

“This became a difficult design challenge. If the design I shared had a single part that was unobtainable, then the entire design was worthless, and would have no lasting impact,” Massey said.

He had a preliminary design drafted, but needed to get his hands dirty and boots on the ground to make a theoretical design into a practical solution for food insecurity.

“We immediately went to the market, and utilized my network of contacts to find a plumber and students at the International Agricultural Association of Students who knew the landscape, and could help negotiate deals for our material purchases. The farm design had to be low-cost, highly productive, and easy to assemble,” Diabangouaya said.

That’s when Massey realized he needed to revise his design.

“I needed a realistic plan that could be scaled across the country. Fortunately, I had a team of farmers, students, and tradesmen to interview to find out more information their design constraints. Although I left the USA to teach lectures about this technology, I learned more than I could ever teach from those facing the reality of resource consumption,” Massey said.

After procuring materials, Diabangouaya organized lectures at the University of Lome and the Woelab technology incubator, where Massey taught lectures about funding entrepreneurial ventures, 3-D printing and the fundamentals of hydroponics with the help of a translator. They then held workshops for lecture participants of various backgrounds to see a system be physically built.

“I am not fluent in French, so the language barrier made it difficult at times to teach technical concepts,” Massey said. “I was discouraged to see blank faces look back at me as I held up materials for the first workshop, and felt like I was losing the audience’s attention. … Then something amazing happened. Hyppolyte Awadi, the plumber who provided valuable insights for the design stood and began teaching the assembly process the audience.”

Participants pulled out their phones to record the instructions. By the second workshop, Massey and Diabangouaya watched students assemble the next Heliponix farm independently without any oversight.

“The knowledge transfer was complete, and it was clear many farms were to be built long after Scott left,” Diabangouaya said.

Massey said they have open-sourced this design in a complete manual in as many languages as possible.

“This will allow anyone in Africa to build their own system, and improve upon the designs as its user base rapidly expands. This Heliponix system would cost $300 to build, could continue producing crops even when the power goes out, requires four square meters and can grow about 250 kilograms of vegetables on an annual basis.

“Our progress in Africa will not be tracked in dollars earned, but instead the number of mouths fed and lives saved from hunger. Most of the countries in Africa import a significant portion of their food, so this isn’t just an issue of environmental sustainability,” Massey said. “This is a national security threat for these countries if their food supplies are cut, so they need to become independent.”